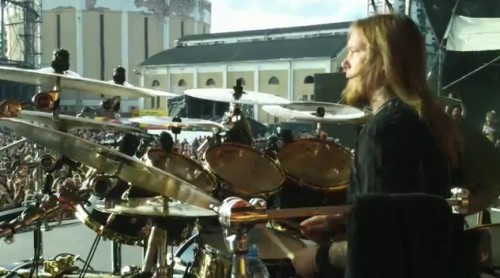 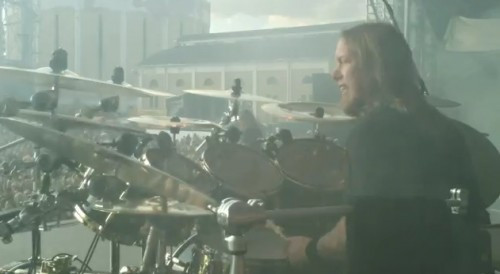 On July 24, 2011, Amon Amarth played the Tuska Open Air Metal Festival in Helsinki Finland. The first song on their set was “War of the Gods”. The video after the jump records the performance from just behind and to the left of drummer Fredrik Andersson. It helps if you know the song already — as well you should — because the sound of the other instruments and Johan Hegg’s vocals are muffled on the audio track, given the camera’s position — but this is still very, very cool.

I don’t know shit about drumming. Basically, to me, watching any capable extreme metal drummer in action is like witnessing a form of supernatural achievement. This is no different. Maybe what Andersson is doing on this song would be basic, ho-hum stuff to a metal drummer watching it. To me, it’s phenomenal.

But that’s only part of the attraction. That supernatural quality is enhanced in this clip by the eruptions of flame that occur throughout the video, as if ejected from the drum kit itself, and by the smoke that eventually enshrouds Andersson before ultimately clearing near the end. True Viking shit.

This gave me a giant [insert slang term for erect penis]. It fucking [insert verb] my [insert testicle reference]. I shot [insert semen idiom] all over my computer screen.  Video after the jump.