(NCS guest contributor Phro returns to us for the second time this week, with another review.)

Okay, so my last review was all a big lie.  What, like you never played with imaginary friends before???  Anyway, this one isn’t.  So, pay attention and then go click the download link towards the middle.

Today, we’re looking at a Ukrainian band called Hedonistic Exility. Both their name and the fact that they’re from a Soviet bloc country are extremely cool to me.  And the fact that Encyclopaedia Metallum states that their lyrical content is “Hedonism, Nihilism, Misanthropy, Abstract themes” makes me just WANT to love this band.  The cover of their 2010 EP Deevolutional Stasis and their 2011 single PsychoTransNymphomania (both pictured below) are as fucking cool as they are…weird. 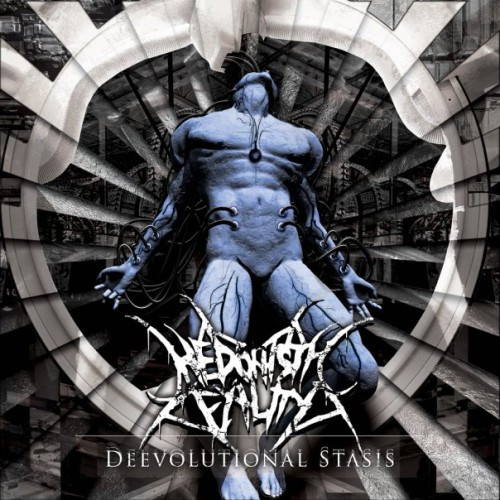 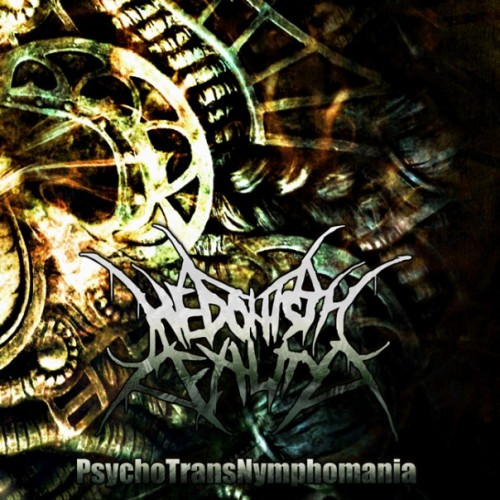 Honestly, I loved cyborg stuff a bit more than I should probably admit in public, so the Deevolutional Stasis album cover alone is enough to draw my attention.  But what about the music?  (more after the jump . . .) 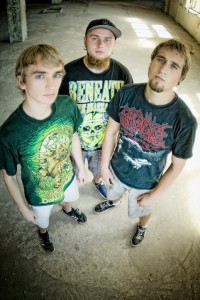 Let’s start with the end and work backwards (because why the fuck not).  So, the single, PsychoTransNymphomania.  How is it and what does it sound like?  Well, if you clicked over to their MySpace (seriously, only in Ukraine), you’ve probably already heard it.  But if not, here’s the break down.  It’s technical death metal.  Straight and simple.  They have speed, intensity of picking, blast beating, and vocals that sound like Cookie Monster chewing through plasterboard.

What I like is that they seem to be using riffs.  Yes, it’s a sweeping mess of notes and down tuning (with some bass drops and break downs thrown in for good measure), but it feels concentrated.  Yes, it’s probably something you’ve heard before.  But it’s done well.  They are tight as a gymnast’s ass and they don’t let up.  If you like technical death metal, you will like this.  (I think.)

I think the problem many people have with tech death is the sort of unfocused barrage of notes.  Personally, I like that (blame the ram that attacked me when I was six), but I can understand why so many don’t.  I feel like these guys—at least on this song—are keeping enough focus to really get into a solid groove.  Feel free to call me a monkey-fellatiating idiot in the comments below.

Now, the EP.  (Which can be freely downloaded here: http://depositfiles.com/en/files/tnpfi20u7.)  The opening track is literally sweeps, a heavy bass line, some distorted weedling and bass drums.  From there, the album continues at a fast tempo (though not at the fastest end of the spectrum).  Unlike the single, there is some use of pig squeals.  Not a monopoly of them, but enough to add effect.  They seem to be mostly used in bridges and choruses.  I’m not sure how you all feel about pig squeals, so maybe many of you will be turned off by this.  Personally, though, I’m a big fan, if used well.

One of the reasons that I like technical death metal (particularly this variety of weedly weedly) is the mixture of high, high notes with low, low bass.  These guys do a good job of mixing them together, swinging back and forth between the crunchy lows in open-feeling grooves and the rapid-fire mania of the shrapnel highs.  About half of the songs also include interesting little asides which “break” the character of the song.  (I’m always reminded of a Shakespearian character turning away from the other actors to interject a thought to themselves for the benefit of the audience.)  These little asides last only a few bars at most, but it’s enough to tweek your nipples to make damn sure you’re paying attention.

To cut to the quick of it: I like this band.  I’m not sure you could call them ground-breaking, but they do their thing damn well.  If you don’t like technical death metal, there’s probably not much point in even downloading their (free, damnit, free) EP.  But as long as you’re not adverse to it, go ahead and click that link.

EDITOR’S NOTE: As Phro has explained, Hedonistic Exility have a MySpace page, which you can access through this link. A fan has also created a Facebook page for the band, here. And guess what? That Hedonistic Exility single — PsychoTransNymphomania — is also available for free download at the band’s MySpace page. Check it out: