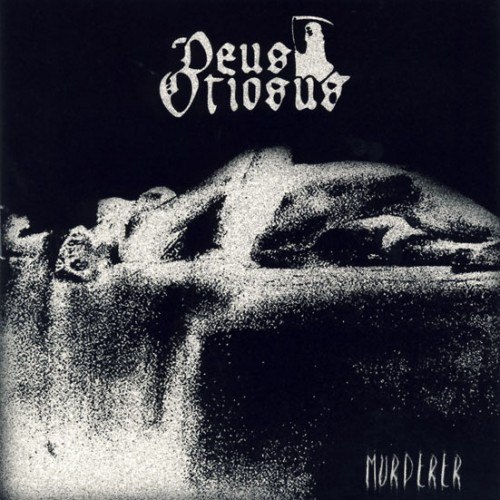 I’ve always thought this was an interesting concept, and it does provide an answer (if you’re a Deist at least) as to why the human world has been such a brutally fucked up place for thousands of years: The creator had some kind of inexplicable fun creating the earth, and then checked out.  (more after the jump . . .) 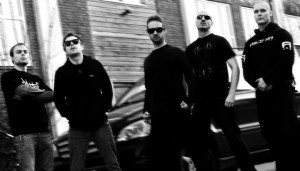 And when the creator has checked out, at least you can fall back on death metal for your salvation. The great thing about playing a game where you make the rules is that when you cheat, you have no one to fear for retribution except yourself. And so it was that I listened to the first song on Murderer, and then the second, and then the third, because I got into what I was hearing and wanted to hear more.

There’s an old-school flavor to Deus Otiosus, a flavor of down-tuned grinding with the aroma of decaying corpses in your nostrils, but there’s also a rhythmic affinity for thrash and an approach to song construction that embraces the reptile brain-stem’s attraction to a big hammering groove. These Danes have a foot on the boat and a foot on the dock, the old-school and the new, and a vicious desire to split you in two. Let’s dive into “Wall of Violence” — the third song on the album. Prepare to be carved like a succulent roast.

Murderer can be ordered in CD form directly from the band at this location. Digitally, the album is available on iTunes and at the band’s ReverbNation store. Hell, I had no idea ReverbNation had an mp3 store for bands. You learn something new every day.  You can snoop Deus Otiosus on facebook here. 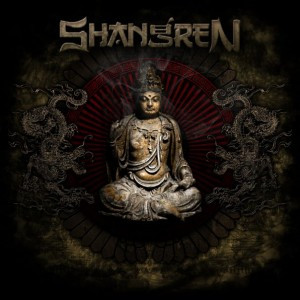 As best I can tell, Shangren is now a one-man project consisting of one Leonard Ong, who, as best I can tell, lives in Australia and is working on an album to be called Rise of the Dynasty. Until that arrives, we have a six-track debut release that appeared in early 2011 called Warriors of Devastation, on which Ong was joined by two other musicians, Andy Suppradit on rhythm guitar and Eve Nathan providing the keyboards.

I discovered Shangren through a MySpace message from the band a while back that billed their music as “Chinese folk/war metal”. As I look back, I wonder, with a description like that, how I could have waited this long to listen.

Folk metal and black metal draw on ethnic traditions from around the world more frequently than any other kind of metal, and Shangren is one of the rare albums I’ve heard that incorporates traditional Asian musical instruments into the heated, rolling fury of blackened metal.

Yes, I cheated again, because I was so enthralled by music that genuinely sounded different.  I was caught up, like a hawk on a column of rising, heated air, by the fusion of memorable melody, liquid, black-metal riffing, and the unusual sounds of unorthodox instruments delivering sounds I’ve never heard before in metal. This music is brilliant in conception and in execution. It will make you want to pound your head into the floor and then bolt upright in surprise. I can’t resist serving up two of the songs I heard, but seriously, every fucking song on this album is awesome:

[audio:https://www.nocleansinging.com/wp-content/uploads/2011/08/shangren+thebattleofwaterandfire.mp3|titles=Shangren – The Battle of Water and Fire] [audio:https://www.nocleansinging.com/wp-content/uploads/2011/08/shangren+monkeyking.mp3|titles=Shangren – Monkey King]

You can legally download all the tracks on Warriors of Devastation at the band’s Soundclick page. For more info, Shangren’s facebook page is here. 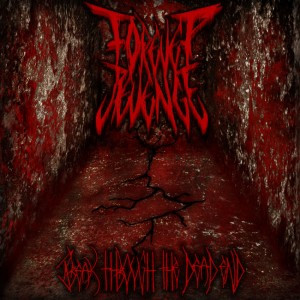 Shangren’s music may be Chinese-themed, but Forever Revenge is actually from China — Hong Kong to be precise. By population, China is the largest country on earth, with more than 1.3 billion people, but as far as I can remember, Forever Revenge is the first Chinese metal band whose music I’ve heard.

The band is the creation of a 16-year old dude named Eliel Chen, who is originally from Finland but now lives in Hong Kong. The Finnish pedigree, of course, is a positive sign.

Eliel e-mailed me a link to the band’s debut album Break Through the Dead End, which is on the verge of an official release. From the e-mail, it appears that Eliel wrote the music and also handled the production, in addition to providing the vocals.

I cheated on my own rules for this album, too, but for a different reason. Instead of getting hooked from the start and wanting to hear more, I continued listening after the first track, hoping to hear something in which I would find a spark of the unusual. Everyone here at NCS knows that our philosophy is not to write about music unless we can recommend it. If we don’t have something nice to say, we just pass on by.  But this series is the one exception to that philosophy, because the point of the game is to faithfully report the results of an experiment.

Break Through the Dead End is a classic example of a young band who haven’t yet found their own sound. For the first five tracks, what I heard was imitation, and not particularly memorable imitation either. Falling somewhere between the stylings of metalcore and deathcore (but without big, booming breakdowns), the songs just didn’t sound free or natural. They sounded simple and stiff, as if following a formula without true conviction. There’s some skill in the playing, but the music doesn’t sound like it emanates from the heart.

Eliel’s vocals are a prime example of what I’m trying to explain: There are a multitude of vocal styles on the first five songs, from high-end screeches to bass-register growls to pig squeals, but they sounded stilted, somewhat forced, and lacking in passion.

Imitation is not an inherently bad thing — everyone must start somewhere, and everyone begins by emulating what they know and like until they develop the confidence to make their own decisions. But for the first five songs on this album, I just didn’t hear anything interesting. And then came the sixth song, “Bleeding in the Darkness”, and that’s where I heard a crackling spark of potential.

On this song, Eliel’s vocals change again, to a frigid black-metal style scraping, but they sound more effortless and natural than any of the other vocals I heard before this song. The drumming takes off, achieving a speed and fluidity I hadn’t heard before. And the song itself includes interesting changes of pace, with a balance of loud and soft, the quieter passages carried by solitary guitar arpeggios and the rushing faster segments fueled by a stream of tremolo notes rather than the relatively simplistic chugging of the earlier tracks. I do like this song. It’s memorable. It shows potential.

I know absolutely nothing about the metal scene in Hong Kong, or in the country as a whole. Maybe the more prosaic songs will find an audience there despite their lack of flair and originality. But in my country or in Europe, I think they would attract little interest. My constructive criticism, coming from a listener who couldn’t play a note if his life depended on it, is to take chances, to push further in the direction of “Bleeding in the Darkness”:

[audio:https://www.nocleansinging.com/wp-content/uploads/2011/08/06-Bleeding-In-The-Darkness.mp3|titles=Forever Revenge – Bleeding In The Darkness]

The Forever Revenge facebook page can be accessed through this link.

18 Responses to “MISCELLANY NO. 32: DEUS OTIOSUS, SHANGREN, AND FOREVER REVENGE”