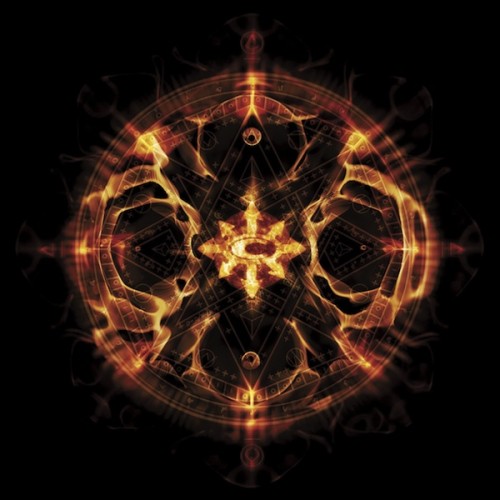 (Today marks the official release of the new album from Chimaira — The Age of Hell — and Andy Synn provides this review.)

Brothers and sisters, the time is at hand, The Age Of Hell is here… but what, precisely, does this mean, both for fans of the band and the group themselves as they enter this “new age”?

For a long time Chimaira have been a band in search of an identity, from their early days as a semi-industrialised scrappy contender, through their more epic aspirations, their stripped down thrash-based years, their expansive and ambitious resurrection and their darker, more death-tinged recent days of darkness. Perhaps then both the greatest strength, and the greatest weakness, of the band remains their occasionally amorphous style?

No one sounds quite like Chimaira, this is true, yet by the same token it’s often difficult to describe what exactly the Chimaira sound is. Though the crushing, powerhouse core of the band always remains intact, the accentuating sonic characteristics of the band are often diverse to the point of diffusion.

I can see this being a particularly polarising record for Chimaira fans, and would be interested to see how it divides the fan-base along certain lines. This is due to the band’s conscious choice to reach back into their own past to recall certain older styles and influences into service. Different tracks recall moments from each of their albums, from the electro-stomp of Pass Out Of Existence right up to the monolithic lumbering death-metal the band toyed with recently on The Infection. True to their mythical namesake, this record is a chimaera of all the styles the group have employed thus far, serving almost as a “best of” collection, updating and improving on all aspects of their sound, yet without ever really defining itself definitively. (more after the jump . . .) 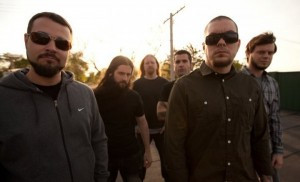 At times this album seems almost like a “reboot” of Chimaira’s career so far. For example, the title-track “The Age Of Hell” kicks in with a storm of venomous vocals and chain-cannon kick drums, its  straight-forward aggression immediately recalling previous barn-stormers “Nothing Remains” and “Resurrection”. Though it eschews the raging hooks of the former and the technical riff-terrorism of the latter, it instead focusses on a primal, refined primitivism that hammers into the listener’s cerebral cortex, keeping strong company with its predecessors.

Similarly “Born In Blood” is a great song, one of the best on the album in fact, a violent blast-frenzy of nasty and angular riffage, with a well-placed guest appearance from Whitechapel’s Phil Bozeman. Unavoidably, however, one of its primary riffs is almost exactly like one which appears on “Worthless”, a jarring realisation which mars the track a little due to its over-familiarity. Yet it remains a great song. It simply feels – at times – as though the band (stripped down to 3 core members for this recording) decided they could re-do their previous material much better.

At their best, however, these songs are more than strong enough to justify their place on the album, and indeed in the discography of the band as a whole, despite these minor faults of over-familiarity.

Though the band made mention of some “risks” they had taken with this album, I feel that this has been over-stated somewhat. Certainly the preponderance of clean vocals on certain tracks, not just their quantity but the manner in which they are used, is a risk when considering the more knee-jerk or conservative metal fan’s response to such things (indeed, their use is definitely ambitious, if not always ultimately as effective as they might want), but equally hazardous was the decision to reach back into their own past and call into service those older styles and influences, risking as it does the alienation of their current fan-base at the cost of perhaps failing to recapture any of their early fans. 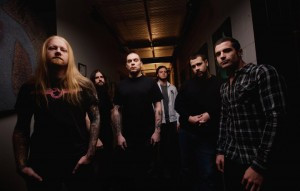 “Clockwork” is an aberrantly structured number, a flawed gem that strives unsuccessfully for more than it can ultimately deliver. It suffers again from a mis-match between ambition and execution, falling awkwardly between darkly melodic progression and stunted aggression. Despite its off-kilter, and at times off-putting, clean vocals, the track features some far more audacious use of stark ambience than the band have attempted before, a gamble which pays off handsomely despite the otherwise flawed nature of the track. Yet overall it lacks any real impact, not familiar enough to be affecting, not new enough to be compelling.

“Losing My Mind” is a stronger effort though, with a particularly nerve-shredding central riff that updates the sound of “The Impossibility Of Reason” with the monstrous, rolling tempos of the group’s latter day creations. Some deeply dark, Alice In Chains-esque vocal harmonies offset the chugging, bleeding crawl of the guitars, while the song’s climactic descent into a slow, lumbering morass of pitch-black, chugging guitars and menacing electronic skirls pairs the melancholy atmosphere of “Down Again” with the down-tempo, cyclical vortex of “Pure Hatred”.

The Alice In Chains influence continues to ring through in “Time Is Running Out”, which kicks hard with some particularly live-wire and sharply melodic guitar leads and a wailing solo. Mark Hunter’s voice remains surprisingly clear for the majority of the track, only occasionally dipping into darker, more guttural territories, although it really is the electronics that shine brightest, pulsating with malevolence and lifting the song to another level with a greater application of mood and subtlety to accent the speedy kick-drum barrages. 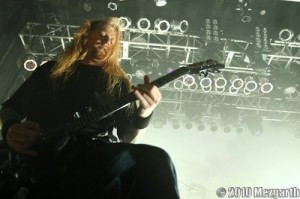 “Year Of The Snake” is a particularly strong song that manages to play old tricks in a new manner, picking up the slack introduced by the slightly out-of shape meanderings of the previous three tracks, even including a particularly potent breakdown section that demonstrates how such structural shifts should be employed. It sees the song shifting gear in an organic, rather than artificial fashion, with an energy and a sense of direction which so many of its ilk lack; rather than flailing wildly and impotently, it delivers a focussed blast of renewed fury whilst also providing a foundation for further growth and melodic nuances from the lead guitar and electronic interplay.

Unfortunately, it is followed by the album’s biggest mis-step, “Beyond The Grave”, which sees the band go for a sludgier, southern swagger, which jars with their usual sound. I’m all for experimentation, and the song itself is at least competently written, but it simply doesn’t sit well with the rest of the album and offers little to actually impress or entice the listener. Indeed, at its weakest, it strikes an unfortunate balance between overly simplistic post-BLS biker-rock and anaemic All That Remains-esque pop-metal vocal melodies.

Thankfully, after the eerie, synthetic atmospherics of “Stoma”, the record takes a significant shift in overall quality and cohesion, finishing with its strongest and most consistent batch of songs. “Powerless” has a refreshing immediacy, cloaking the stripped down exo-skeleton of their self-titled effort with the moodier and altogether darker, self-destructive instincts developed in the intervening years. Its steady, mid-paced groove moves with a serial killer’s predatory grace, stalking the shadows patiently, a series of vocal and guitar melodies disguising its violent intent.

“Trigger Finger” and “Scapegoat” bring back the death metal heft and manic speed found on “The Infection” and “Resurrection” respectively. “Trigger Finger” has an Obituary-esque ground and pound, matched to utterly explosive instances of flesh-tearing speed and face-melting aggression, interwoven with teasing electronic embellishments and a hypnotic, spiralling chorus riff, leading into some air-tight rhythm playing which underpins a scorching solo . 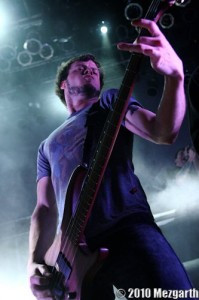 This one-two punch of quality is completed by “Scapegoat”, one of the album’s most stunning tracks, which crams in a vast amount of energy and dynamic variety into a surprisingly concise run-time. It ducks and weaves through multiple stylistic shifts, though without losing that central thread which ties it all together. More than any other song on the album, it draws from, and combines, all periods of the band’s history  in an organic fashion that creates a whole far stronger than the sum of its parts. From its mechanically tight, industrial-strength rhythm guitars, to the rolling, thunderous death-metal chorus, to its epic, classically-tinged solo section, the track oozes quality, closing with a teasing and sorrowful acoustic guitar outro that, by rights, would end the album on a sombre, yet triumphant note, were it not for the humongous guitar leads and blitzkrieg drumming of instrumental closer “Samsara”.

So how would I characterise this record… and where would I place it in the Chimaira discography?

Stylistically, I am most put in mind of their self-titled effort, an album which, barring a small selection of extremely strong material, was largely directionless and surprisingly bland – The Age Of Hell seems like a largely successful attempt to rework that record, resulting in a primarily stronger and (perhaps) more definitive effort.  Though every member performs at their best, not just instrumentally but in their compositional abilities, it is the electronics in particular have which been incorporated in the most superior manner, their stark and altogether inhuman tones tying the record together despite its constant shifts in tone and style.

Perhaps, given the new line-up, this will serve as a jumping off point for Chimaira to once again reconsolidate their sound in a more coherent manner and see the start of a new era for the band as, at its best, it takes the oppressive, slow-burn intensity of The Infection and marries it to the unwavering force and dynamism of Resurrection whilst still remaining conscious of the group’s more diverse influences. It is unfortunate, however, that the weaker moments on the album, scattered though they may be, come across as more striking due to this contrast against the overall quality of the songs and the clear effort that has gone into their creation. 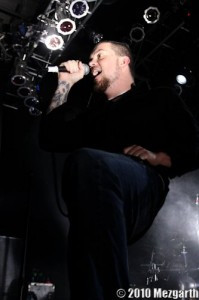 This will doubtless be a divisive album in the Chimaira catalogue, loved by some, derided by others. It sees their finely honed power and aggression hamstrung by some occasional mis-steps and an at-times confused sense of direction, reflecting, for better or worse, all the multiple facets of their sound to date. It’s a good album. In fact, the more I listen to it the more I feel that, for most of its run-time, it’s a very good album – albeit one that seems primarily composed of re-workings of the best bits of their previous albums.

But it’s not yet the world-beater that I still believe Chimaira have in them.

EDITOR’S NOTE: The Age of Hell is officially released today on the eOne Metal label. The band will also be launching its first US headline tour in October with support from Impending Doom, Revocation, and Rise to Remain.  Dates will be announced shortly. There will be a second leg of the tour in November/December, and then the band has plans for touring Australia, Europe, and the UK beginning next February. To keep tabs on these developments, you can find Chimaira’s facebook page here or their slick new official web site here.

The entire album is now streaming in full at AOL (here). And now, here’s the band’s official video for “Year of the Snake”:

2 Responses to “CHIMAIRA: “THE AGE OF HELL””