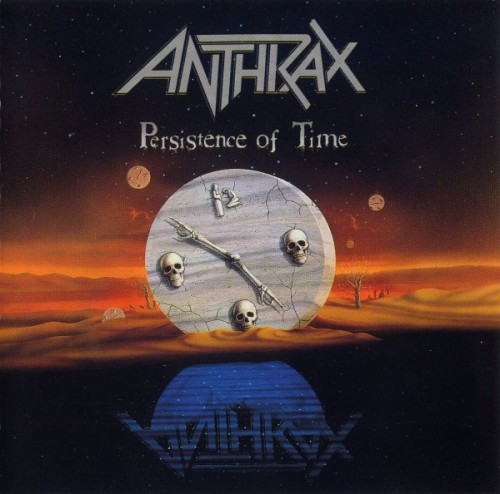 (In light of the positive response to TheMadIsraeli’s “Revisiting the Classics” post about At the Gates, we’ve decided to make this a continuing feature, and all of us here at NCS will be contributing over time. But for the second installment, TheMadIsraeli is back again, and he’s looking back at Anthrax.)

Since you guys liked my “Revisiting The Classics” column, I thought I’d do another until I can pump out the next round of current stuff. Have some good stuff coming down the pipe, including another discography download. But now, we’re talking about Persistence of Time (1990).

This is Anthrax’s best album. NOT Among The Living. Get that notion out of your head. It’s amateur tripe compared to the maturity found on Persistence of Time.

This song alone showed an evolution in Anthrax that sadly they would never follow up on. They were coming into an identity that was going to set them apart from the pack even more than they already had been. The punk flavor was full-force in the music, the energy was brimming, but what this thrash interpretation of a Joe Johnson song didn’t demonstrate was the sophistication Anthrax achieved on this album, the maturity, and the song-writing talent. I’d wager if you bought Persistence Of Time based off “Got The Time”, you weren’t ready to be hit with this when the album opened up:

I mean, yeah, this wasn’t as fast as Dark Angel, or as brutal as Sepultura or Demolition Hammer, but it had taste, character, energy, and thrash attitude in spades. The album may not have been the full headbanging experience you were looking for, but listening was a blast. And I do think that if you didn’t want to break things to the stomp of “Keep It In The Family”, you were way too inhibited.

You have to admire the experimentation on Persistence and the variation in the music.  I don’t see how it’s possible not to AT LEAST admit that the rapping in “Blood” was infectious in the most virulently viral of ways, or that it was possible to avoid getting immersed in the groove of the song. I don’t see how it’s possible not to conclude that this was Joey’s best vocal performance, both in tone and in crafting memorable vocal melodies. That chorus in “In My World” is just too much of an anthem not to throw yourself into it with all the cheesy 80’s vigor you can muster.

Of course, that doesn’t mean the album was lacking in fierce thrashers in the classic Anthrax style. You had stampeding numbers like “Gridlock” and “Discharge”, one of my favorite Anthrax tracks ever.

The rest of the songs exhibited Anthrax writing good, catchy material and working with the post-thrash sound that was starting to peek into their sound. This represented the best out of all the old-school bands, probably next to Overkill’s mid-period work.

I don’t have as much to say about Persistence as I did Slaughter of the Soul, but SOTS had a massive influence on metal, and this album didn’t. As a matter of fact, I think this album was unfairly overlooked. It’s Anthrax at the height of their glory, the synthesis of everything in all of their previous albums, and the peak of their maturity, yet it was mostly ignored. Very sad to me, indeed: Maybe they wouldn’t have felt pressured into their shoddy groove-metal material later had this album invoked a stronger response.

7 Responses to “REVISITING THE CLASSICS: “PERSISTENCE OF TIME””