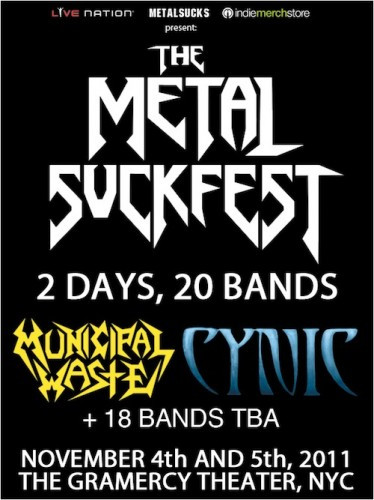 When I was growing up, in the larval pre-metalhead stage of development, I remember watching TV ads for Smucker’s jelly that featured the slogan: “With a name like Smucker’s, it’s got to be good!” I didn’t understand that slogan at the time. Smucker’s jelly did taste good in the PBJ sandwiches I used to take to school, so I didn’t see why it had to taste good just because the name was Smucker’s.

Looking back, I get it now: The company might have been able to fool consumers into thinking the jelly was good, even if it tasted like shit, by calling it something like “Orgasm of the Gods”, or maybe “Fucker’s”. But because the name was Smucker’s, which had no sex appeal at all, the jelly had to stand or fall on its own intrinsic merit.

Where was I going with this? Oh yeah, where I was going was the subject of a new metal festival called “Suckfest”, sponsored by our friends at MetalSucks. “Suckfest” is a clever name, but it’s also a ballsy name, because with a name like that, it had better be good. At least they’re off to a good start, announcing yesterday that Day 1 of the fest will be headlined by Municipal Waste and Day 2 by Cynic. The rest of the 20 bands will be announced over time, and we’re mighty curious to see the rest of the line-up.

We’re also mighty proud to see a metal blog as the lead sponsor for a whole 2-day, 20-band festival in New York. Really, that’s an impressive accomplishment. Granted, it’s not quite as impressive as the NCS-sponsored, nationwide FUCKING GOOD PANCAKE TOUR, but it does have the very slight advantage of being real. We’ll be keeping our eyes on the unfolding of the line-up. We might even have one of our own intrepid reporters on site to cover the event. Depends on how well our bake sale goes.

9 Responses to “WITH A NAME LIKE “SUCKFEST”, IT’S GOT TO BE GOOD”