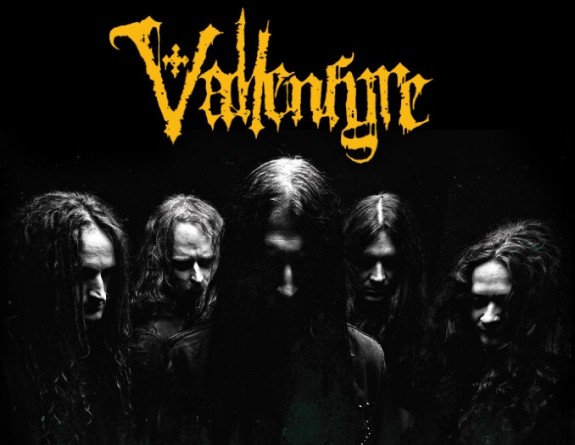 Yesterday I spent some time on Blabbermouth catching up with metal news I’d missed over the last week. One of the reports caught my eye. It was about Century Media’s signing of a UK death metal band called Vallenfyre. Here’s what I read:

Just like SONNE ADAM from Israel, VALLENFYRE debuted with a seven-inch single on the underground label Imperium Productions and also shares a similar approach of mixing classic death metal with doom and in case of VALLENFYRE some British crust on top.

“VALLENFYRE’s debut album, A Fragile King, is already recorded and will be released in late October 2011.

“If you like a mix of early ENTOMBED, CELTIC FROST, AUTOPSY and AMEBIX, you should hurry up to buy the last few copies of the ‘Desecration’ seven-inch single, which was limited to only 500 copies by Imperium Productions.”

All that peaked my curiosity, even making allowances for the well-tuned PR hype. So, I poked around to learn more about this band — and found almost nothing. But what I did find has gotten me extremely interested in this album. (more after the jump . . .)

I didn’t find a Metal Archives entry or a facebook or myspace page or any YouTube clips or any reviews or news articles, other than about a jillion web sites that merely reproduced that press release I quoted before the jump. I didn’t find anyplace where I could download that seven-inch single, legally or illegally. What I did find was a player on Soundcloud that included parts of the two songs that are included on the single — “Desecration” and “Iconoclast”.

Listening to this sampler was torture — torture, because the samples sound fucking awesome, but I couldn’t even listen to the two songs as a whole. I decided the best way to purge my tortured feelings of frustration would be to torture you. I feel better already. Listen to this — you can bet your ass you’ll be hearing more from us about Vallenfyre as soon as we find something else to report.

P.S. From the photo I found, the members of Vallenfyre look mature enough to have been metalling for a while, with other outfits. If you happen to know any more about this band or its members, leave us a comment. Yeah, I know that all will eventually be revealed, but Impatient is one of my middle names.