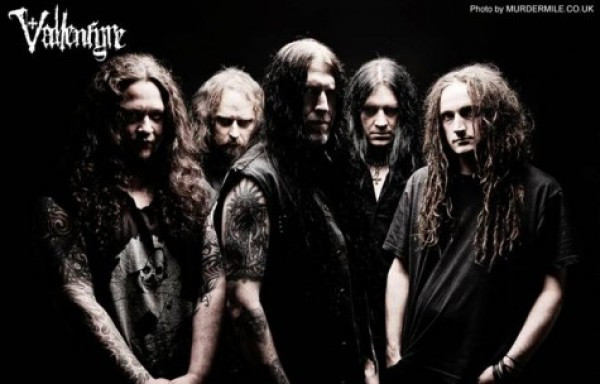 About five days ago we ran a post about a mysterious new UK death metal band called Vallenfyre who had recently signed to Century Media basically on the strength of a two-song 7″ single. Granted, after listening to excerpts of that single, it became immediately apparent why a venerable label like Century had signed this band, because the music is motherfuckin’ titanic.

In that earlier post (which generated quite a lot of interest as it turns out), I explained that despite hunting high and low over the trails of the interwebs, I had found very damn little information about the band. At the end of the post, I ventured a guess, based on the maturity of the music and appearance of the band members that they “have been metalling for a while, with other outfits.”

Well, holy fuck, was that a good guess. Today, Century Media released some additional details about Vallenfyre. For example, here’s who is in the band:

Good lord, is that an impressive collection of talent or what. And coincidentally, it wasn’t so long ago that we posted a feature about Adrian Erlandsson and his brother Daniel (here). But wait, there’s more: Vallenfyre’s debut album, A Fragile King, will be released on October 31 in Europe and on November 1 in NorthAm. And there’s still more (after the jump). 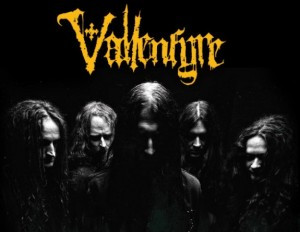 According to the story about Vallenfyre that appeared today in Blabbermouth, Vallenfyre’s music had its genesis in the December 2009 death from cancer of Gregor Mackintosh’s father, John, who was clearly a profound influence in his life. The album’s title is itself a reference to his losing battle with cancer. The grief of that loss drove Mackintosh back to the roots of his experiences with metal, and the creation of the first Vallenfyre songs appear to have been both a working-out of his anguish and a testament to both his father and to the kind of music that first inspired Gregor.

This may explain the intensity and power in the song excerpts we featured in our earlier post, and makes me all the more excited to hear the new album when it comes. Here is the full report from the piece in Blabbermouth. (Thanks very much to NCS reader Fretzel for tipping me to this news.)

“The sound of VALLENFYRE goes back to Gregor‘s youth.

“‘I was first introduced to more extreme music by my older brother in 1981.” Gregor says. “Over the next few years in my early teens, I grew to love various early hardcore punk bands like DISCHARGE, ENGLISH DOGS, CONFLICT, etc. Around a similar time I was becoming aware of other more metal music like MOTÖRHEAD and BLACK SABBATH. In ’84/85′ I got into bands who were fusing these styles like HELLHAMMER, ANTISECT and AMEBIX. A couple of years later I started tape-trading with people all around the world, which enabled me to hear lots of really cool, interesting, extreme music. AUTOPSY, NAPALM DEATH, MORBID ANGEL, REPULSION, NIHILIST are some of the more well-known names I started to get into, but there were many, many more which never gained the same notoriety. At the same time, I formed PARADISE LOST with my friends. Our early stuff was a bit of a mixture of all this stuff but we also had a lot of doom influence from the likes of CANDLEMASS, TROUBLE and ST. VITUS.’

“The events that led to the conception and formation of VALLENFYRE are not particularly happy or pretty ones.

“‘In the late summer of 2009, my father, John Mackintosh, was diagnosed with prostate cancer,” Gregor explained. “Later in the autumn as his treatment progressed, PARADISE LOST embarked on their European tour to support the latest album [‘Faith Divides Us – Death Unites Us’]. A week into this, I received a call from my mother telling me that the doctors had found cancer in his lungs and it was terminal. He only had weeks to live. I made the decision to leave the tour, leaving my very able guitar tech Milly [not be confused with VALLENFYRE‘s Mully] to take my place. I went and stayed with my parents for the next few weeks. After a very sad and painful time, he passed away on the 2nd December early in the morning. Over the next few weeks I experienced all the famous stages of grief. It started to become very self-destructive so I decided to channel it into creating something. To pay respects to the man that drove us to our very first gigs because none of us could drive. The only dad I knew that listened to BOLT THROWER‘s ‘Peel Sessions’ on the radio. The guy who gave me my first chord book. I decided that I was going to go right back to the beginning. To my roots in death, crust and doom. It all started very angst ridden. This wasn’t originally meant for anyone else to hear. It was a release. After recording some material, I realized that I was actually enjoying doing this but I wanted friends involved so it could actually become real fun.’

“The tracks on the seven-inch single and the upcoming album were recorded between December 2010 and April 2011.

“Added Gregor: ‘The album is called “A Fragile King”, which is a reference to my father’s battle with cancer. The lyrics are predominantly about the same thing, but also include gripes with society, religion, politics and relationships as well. It’s all pretty grim.’

“VALLENFYRE is not a one-off project but will continue as a band that will also play live in 2012.”