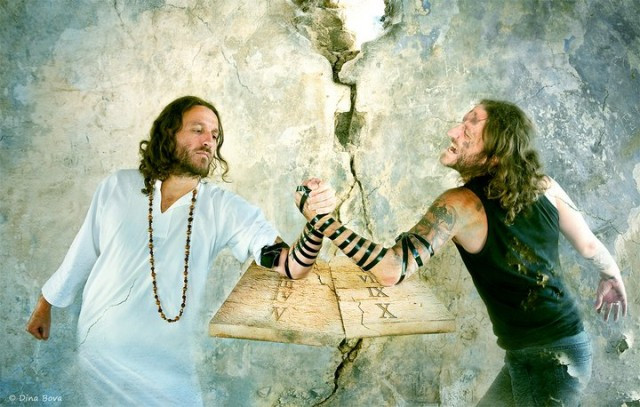 (Today is a day for guest contributions, and this one is from ElvisShotJFK, who has been a friend of this site and an insightful commenter almost since the beginning of NCS. And there will be more to come from him next week . . .)

It’s no secret that I am quite fond of the stuff deemed Oriental metal or Middle-Eastern metal. There’s something about it, beyond the music itself, that I find myself drawn to for some reason. The band that is most directly responsible for this would be Orphaned Land.

Mabool is one of those albums that made me aware of music I hadn’t really heard before and gave me reason to explore the music of other bands from the region. And of course, I was eagerly awaiting the arrival of The Never Ending Way Of ORwarriOR. I wasn’t fond of the title, but as Mabool had proved to me before, one shouldn’t judge an album by its title; ORwarriOR met my expectations and even exceeded some.

For a metal band to thrive in the Middle East is quite an accomplishment. Orphaned Land had disbanded after their second release, but they had a loyal fan following brought together by the internet, which helped convince singer Kobi Farhi to bring the band back together. With a new record deal, Mabool was the impressive result that they needed.

One of the things about Orphaned Land’s fans is that they have been able to put aside many of their differences – real and perceived – to come together under the banner of metal. Regardless of the generations-old hatred that is still passed on and on, Arabs and Jews have gathered together, singing in each other’s languages and getting along.  Much better than the shit we usually hear about on the news. (more after the jump . . .) 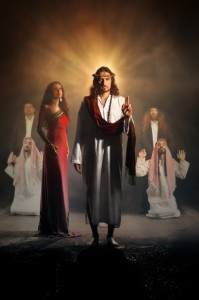 That this can happen is a reflection of metal fans in general. I think that metal fans are kind of like a family – a very dysfunctional family, with heavy emphasis on the FU at times, but still a family of sorts. We may disagree about metal genres and sub-genres, debate over bands “selling out”, argue about which lineup was the best and many other issues, both trivial and significant. However, we can also be united about a great number of things, something which I’m not sure you can easily find in the fanbases of other types of music (at least nowhere near as strong as what we have).  While we may not always be polite or civil to each other, I think we do have a kind of common bond that you don’t get elsewhere, be it rap, country, dance, pop or any other music.  For all the crap we (and the bands) may do, we can do some amazing things for no reason other than because it’s the right thing to do or because someone needs help (think of finding a donor for Nergal as a recent example).

We make fans of other music look like amateurs.

Which brings me back to what one can see with Orphaned Land. The band knows that the differences between us don’t really matter, and that is a part of the message they put forth with their music – all without being preachy or condescending. Many of their fans understand the message and simply “get it”. Unfortunately, as a result of the region they live in, they can’t always make a direct connection to many of their fans. In some places, it’s actually dangerous to be a metalhead; some fans have to hide the fact that they listen to metal, especially if it’s a band that comes from Israel. Thanks to bands like Orphaned Land (and Salem, who are also very instrumental in building up the metal scene in the Middle East) metal has become stronger over the years and there’s some fantastic stuff to be found where one wouldn’t expect to find metal; I believe that this has also helped bands from other countries where it’s not dangerous to be in a metal band or to listen to them.

But not everyone who wants to see or hear Orphaned Land is able to, so they put ORwarriOR online so that fans who can’t get it where they live can still hear the album. This doesn’t mean that those of us in countries where being a metalhead doesn’t put our lives in danger can’t download the album. I don’t want to speak for the band, but I don’t think they really have a big problem with people hearing their most recent album – they put it online for a reason, after all. The entire album can be downloaded from http://www.metalarmyinternational.com, ripped at 192 kbps in MP3 format. The quality may not be up to some peoples’ standards, but it’s still good enough to listen to. The album has a lot going on and one listen isn’t going to reveal everything that is has to offer. But if you do download it, do try to listen to it at least once in its entirety. 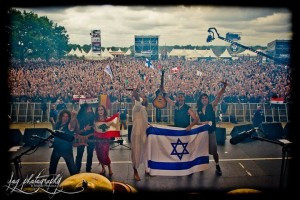 It’s not something everyone will like, that much is true.  It’s not exactly a casual experience.  If you have an aversion to clean singing, well…. you’re going to encounter quite a bit of it, both from Shlomit Levi (the female singer) and Kobi Farhi.  However, he hasn’t forgotten how to growl and roar and uses this side of his voice as well as his clean singing.  Plenty of Middle-Eastern melodies, some fantastic guitar playing, and wonderful use of Arabian violins are among the musical highlights of ORwarriOR.

I do hope you like the album, and if you do, I ask that you consider buying some of Orphaned Land’s music or merch or seeing them perform if you can. By supporting the band, you can help ensure that Orphaned Land and others like them can continue to make music and play to their fans, even if they can’t always go to where their fans are. Maybe one day, that will change, bands and fans being able to come together without fear. Progress is being made to that end, but it’s slow going.

If you do like the album, I have one more simple request of you:

Crank it for those who can’t.