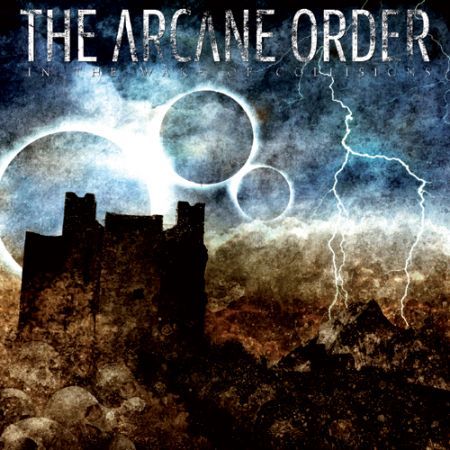 (TheMadIsraeli reaches new heights of fanboy-dom in this latest installment of his Melodeath Week series, shining the spotlight on Denmark’s The Arcane Order.)

Just listen to this…

I think I could honestly end this article right here, but I’m a fan boy for this band, so I have to gush a bit. (gushing, and a lot more music, after the jump . . .)

The Arcane Order are possibly Denmark’s best export in the modern metal age.  In The Wake Of Collisions (2008) is the band’s sophomore and most recent effort. They have such a unique sound going for them that’s so massive, so cacophonous, and so venomous, it’s amazing to me they haven’t caught on more.

They are probably the most brutal band on this Melodeath Week list, next to an unnamed band who’ll be featured later.  No one besides maybe Darkane is writing melodeath this technical and brutal at the same time. (As a side note, if I was that much of a whore, I’d just do Darkane every day of this week. I worship that band.). They use the frantic speed of thrash metal and black metal to help convey their melodeath core to the listener. There is also, dare I say, a TINY bit of post-metally experimentation going on, too, mostly in the band’s choice of odd ringing chords that create an unusual dissonant ambiance. The closer “Horizons Buried” is the number one example of this in action.

The lineup of Kasper Thomsen (vocals), Flemming C Lund (guitar), Kasper Kierkkegard (guitar), Martin Lowe (drums), and Boris Tandrup (bass) may be one of the best lineups in the history of, like, fucking ever. Kasper Thomsen delivers a high-ended, Lindberg-ian bark that is just perfect for what’s going on here, and Lund and Kierkkegard are one of my favorite modern metal guitar pairs out there right now.

The bass of Boris Tandrup provides a rock-solid foundation, but the standout member besides the guitarists in this band is drummer Martin Lowe. This dude is a machine to end all machines — a cybernetic warfare device implanted into audio format, ready to destroy everything that falls into his path. I mean, JUST LISTEN to the drum work on “When Oceans Become Desert”, especially the ending climax.

HOW DO YOU BEAT THAT!?

If it’s not the punishing blaze of speed of “Between Reason And Hubris”, it’s the Goliath-sized assault of “The Reaping Revengence”. Other awe-inspiring moments on In the Wake of Collisions include the sci-fi toned keyboard outro of “Sanctity Of Allegiance” and the death-bringing hornet swarm that is “Unleash The Tyrant”.

This album is just SO FUCKING GOOD! I understand if you’ve not been made aware of these dudes before, but now that you have, I demand you secure this album, as well as their previous one, Machinery Of Oblivion (2006), and learn how melodeath should be played in the current age.

[EDITOR’S NOTE: Fans of The Arcane Order will be pleased to know that the band has written six new songs and last month began rehearsing for the first time in two years. Though their last release was on Metal Blade, they’re now on the lookout for a new label. The band’s Facebook page is here, and it’s a nice one because the band seems to respond to almost every relevant fan posting on their wall. And now, here are the rest of TheMadIsraeli’s song choices for your listening pleasure.]