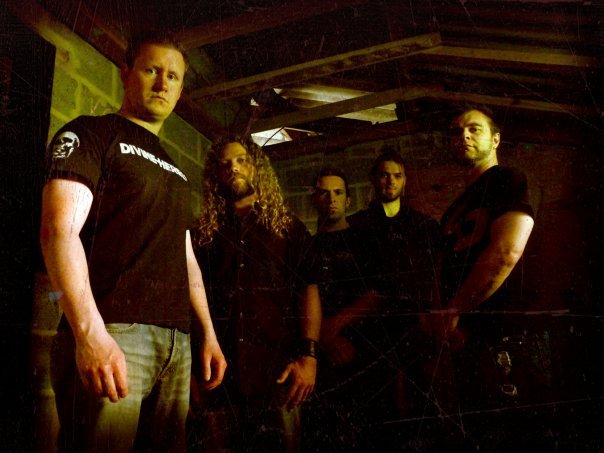 (I fancy myself a death-metal aficionado, and yet I am learning something new today, thanks to Andy Synn’s report on the discography of Emeth. Allow me to say, FUCK YEAH!)

This Belgian death machine will most likely be new to a lot of you, having spent most of the dark years since it first burst from its cadaverous womb subjugating the scum and villainy of Belgium’s metal underbelly beneath its heel.

Though Belgium does seem to possess an untapped hotbed of bands from all across the genre spectrum, the butchers of Emeth deal solely in a violent trade of brutal death metal that shifts back and forth between incisive hooks and nigh unlistenable, raging mania.

The group’s name means “truth” in Hebrew – a fitting epithet indeed, for a band whose aim is to plumb the depths of the human condition and expose these dark, often disgusting, truths about our fragile existence.

Yet far from being simple death-obsessed goreophiles, the men of Emeth choose to follow a more enigmatic path, delving into themes of insidious terror and shadowy mental torment, as brutal and horrific as any nightmarish concoction of their cannibalistic brethren.

Each album deals with its own terrible truth, the tormented facts and elusive fictions of the physical, the mental and the existential, whose faceless vehemence and formless horror weigh heavily upon our lives. 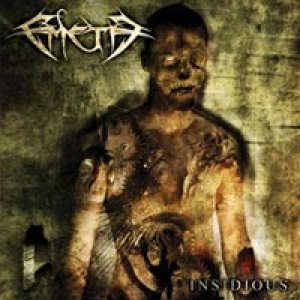 Barrelling head over heels with an unrelenting typhoon of shifting tempos, grinding gears and putrid vocal utterances, “Impermanence Of Being” begins the record with strafing runs of Gatling-gun snare-blasts and scorching, dissonant guitars. The belching, guttural vocals are engorged with their own corruption, vomiting forth a nightmarish cascade of sickening images and infectious, lyrical plagues.

Without breaking from their bulldozing pace, “Catatonic Entanglement” erupts in a poisonous cocktail of rusty, serrated guitars and ugly, brutish drumming blasting away in indulgent, masturbatory frenzy between moments of terrible, ominous restraint. Raw and bleeding chords hang menacingly before crashing down with repulsive power, unleashing overpowering waves of virulent dementia.

This is followed by the one-two punch of “Manifestation” and “Mitigated Enmity”, two of the album’s most infectious and flesh-eating cuts. The gruesome visage of “Manifestation” displays the aftermath of apocalyptic havoc, pulsing organs of visceral discordance wrapped in barbed-wire guitars, shredding with bitter disdain, while “Mitigated Enmity” is a brooding, mutated monster of grinding Suffocation-style brutality  and jerky, spasmodic, hyperblast fury.

“Endemicy Preordained” is pure death metal brutality, untainted by outside influences, delivering a teeth-jarring uppercut of focussed, primal violence through its sandpaper riffs and bestial growls, whose focussed destruction leads perfectly into the random chaos and evolved technicality of “Stratum”, a calculated and clinical exploration of disgusting physical decay and tortured mental decline.

Callously dissecting it’s still living victims with cruel glee, the ghastly growls of “Archaic Halos” are echoed by the tortured screams and howls of anguish of the damned, almost lost amongst the torrent of pandemonic malevolence the band unleash. Rumbling, ominous bass-lines underpin gnarled and angular riffs, delivered at breakneck pace, creating a hellish firestorm of inhuman horror.

The album closes with the unholy pairing of “Mimetic Conflation”, an atrocious collision of slamming violence and savage, shredding barbarism, and “Aeon”, a morbid, bloody slow-down that progresses into an evil and disease-ridden symphony of sick promise and brooding darkness. 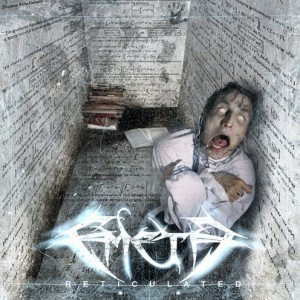 As reflected by the change in visual style, Reticulated sees the band shift their thematic focus from physical decay to mental decline, concocting an album which maintains the furious eye-gouging heaviness of their debut, accented by a distressing, fractal array of warped riffs and stabbing needles of horrid melody.

It opens with the manic technicality and fractured chaos of “Eleven”, Tom Kimps’ spiteful vocals having shifted toward a more aggressive, gravelly performance, only occasionally delving into more resonant gutturals, over a series of scathing, dissonant riffs and stuttering, jack-hammer blast beats.

“Fallacy Of Reason” continues the unforgiving nature of the record, scatter-gun blasts accented with arch, off-kilter rhythmic shifts as Kimps barks and screeches with virulent, insane rage. The twin guitars of Matty Dupont and Valery Bottin spark and grind incessantly over rumbling, cataclysmic bass-lines, shredding mercilessly before diving head-first into a series of dragging, anvil-heavy slowdowns.

Almost lost amongst the poisonous hooks and irresistible momentum of “Karmic Impediment”, Aborted’s Sven De Caluwe turns up to deliver his signature growl, the pairing of the two vocalists resulting in a disgusting collision of death metal filth and fury, whilst the band unleash some of their most distinctive riffs and mechanised rhythms to devastating effect.

The cripplingly heavy “Heteronomy Of The Will” is utterly lethal in its stunning power and force. Jaw-dropping technicality and angular, stop-start rhythms clashing up against piercing Cannibal Corpse harmonics and apoplectic explosions of unfettered blast frenzy. The closing slow-down breathes pestilence, corrupted by strange, dissonant melody lines that writhe in ungodly torment. 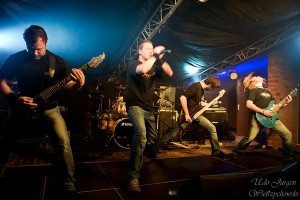 “Concentric Diversions” blazes by in a furious storm of rage and anxiety, a short and unrelenting display of juggernaut blast-beats and vocal venom, while “Predestined To Persevere” is a more expansive, complex number that contrasts some of the album’s most singularly extreme moments of blast-driven ferocity with eerie moments of inhuman clarity and piercing lead guitar sections.

“Order From Chaos” displays a Cryptopsian disregard for conventional structure in its twitchy, nervous shifts between precise, razor-sharp technicality and unstructured, berserker grind, following which “Synoptical Incoherence” flails and brutalises with crazed, unstructured violence, its unfocussed chaos in sharp contrast to its predecessor’s serial-killer precision.

Closer “Nescientia” provides a foreshadowing of the band’s future direction, lethal mechanical rhythms and rumbling, combustive bass-lines imploding under their own weight. The vocals delve ever deeper into a pit of loathing and disgust, as jagged, nasty riffs scratch and squeal with psychotic intensity, building an inescapably dark and malignant atmosphere.

Sample Song: “Heteronomy Of The Will”

[audio:https://www.nocleansinging.com/wp-content/uploads/2011/08/04-Heteronomy-of-the-Will.mp3|titles=Emeth – Heteronomy of the Will] 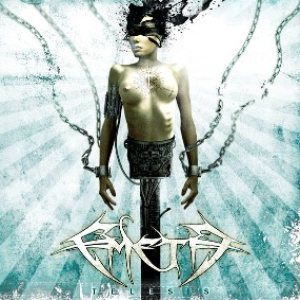 Continuing the mutant evolution of the band, Telesis sees the spreading contagion of Emeth infecting and absorbing some more noticeably “core” elements, already hinted at by the vocal and rhythmic transformations displayed on Reticulated. Yet this is far from an indication that the band is selling-out or running out of ideas, rather it is a natural consequence of the mutating nature of Emeth’s musical plague, evolving new forms of delivery and infection, adapting as its victims become immune, creating new strains which are just as lethal and virulent as those that have come before.

Wilfully unorthodox, “Silence Goes Unheard” commences the record in uncompromising fashion, matching teeth-gnashing savagery with machinistic lethality. The sonic clarity is simply punishing, a pummelling avalanche of wild drums and fanged guitars wrapped in a cloak of awful melody. The vocals have melded the best parts of the previous two albums, returning to more guttural demonic sound, both clearer and wider-ranging than displayed before, combined with a more belligerent and hate-filled delivery. The track bulges with insistent, piercing hooks, yet closes with an unexpected diversion into crazed, jazz-tech inversions of anti-melody, showcasing Emeth’s decision to push the limits of their sound as best they can with this record.

The brutal sedition of “Anochi Kofer” continues to pile on the pneumatic, bone-jarring riffage the band are famous for, accented by some viciously incisive melodies. The scattershot drumming retains the power and extremity of previous records, but also demonstrates a significant increase in nuance and complexity, while the guitars have developed a misanthropic tone of blazing technicality and stark clarity.

The title track to the record is a cohesive and tightly written demonstration of speed and intensity, sharp-edged riffs flaying flesh from bone in a razor storm of keen-edged melody and scorching flame, culminating in a vast construct of tormented atmospherics and crushing, death metal bludgeoning, which transitions seamlessly into the staccato artillery-fire drumming and bloody vocal revulsion of “Soulstorming Echoes”. Winding tremolo guitars drive a spike of menacing melody into the heart of the track’s blood-stained grooves. This is followed by the spiky, jolting rhythmic work-out of “Folly And Weakness”, a harmonic heavy disaster-zone of bubbling vocal exhortations and bouncy, hammering guitars, thick with catchy riffs and barbed hooks, which climaxes in a brutally effective, staggering slow-down. 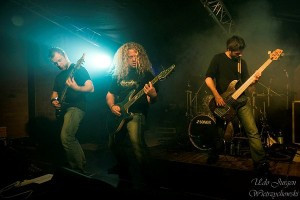 Though by comparison Telesis is not as utterly unhinged as their debut, it is perhaps the ultimate culmination of their years of work, showcasing a brutal efficiency of performance and composition where song takes on its own individual identity and militant power. Songs such as the titanic, low-slung “Monolith” rumble with barely contained fury, concrete-slab riffing providing an armour-plated foundation for the song’s ever shifting tempos and fluid, manic soloing. It is balanced by the sparse and lean carcass of “Existence Beyond Being”, thorny, twisted dissonance and sand-blasting drumming snarling and snapping with rabid ferocity, enchained by tightly compressed, agonised pseudo-melodies.

A bubbling cauldron of insanity expels its contents in “The Doer Alone Learneth”, a flowing stream of diseased consciousness wrapping madly around the dizzying riff patterns and irritating, uncomfortable lead guitars. Here in this cathedral of torment harsh harmonics and devilish solos lay the foundations for monolithic, filth-encrusted altars of madness.

Aided and abetted by the vocal contributions of Boris Cornelissen (Leng Tch’e), “Will To Power” delivers a lethal dose of toxic melody on top of a series of mechanized, Decapitated-esque riffs which pummel and jerk with wild-eyed fury. The song’s whirling-dervish onslaught of scathing guitars and scorching blast-beats reaches grindcore levels of intensity balanced by teasing, experimental moments of off-kilter, jazzy melody. After a sheer assault of brutalising metallic aggression, the song’s violent conclusion leaves the listener bloodied, beaten and broken.

Sample Song: “Will To Power”