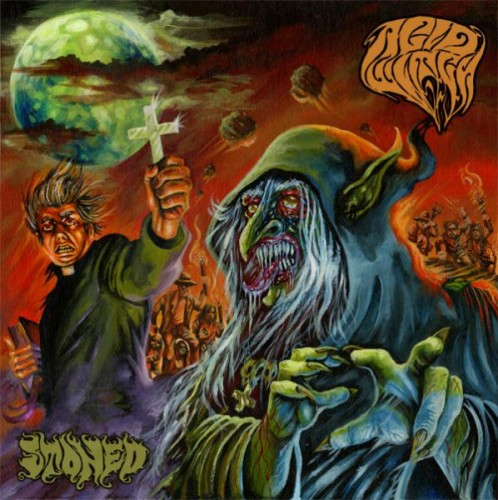 (Trollfiend is back with another guest contribution. Smokin’ a bowl before writing is clearly a winning literary formula.)

Let me preface this jibba-jabba by saying that I am not, normally, a fan of stoner or doom metal.  The reason behind this is simple: I have a tiny, walnut-sized bladder.  Now I know what you’re thinking: “did he really just fucking quote Mr. T?” Yes, yes I did, and I have only disdain for the ignoramus who doesn’t think Mr. T is awesome.

You might also be wondering what having a tiny, walnut-sized bladder has to do with stoner/doom metal.  The answer is simple biology: I don’t have the nephrotic fortitude to sit through an 11-minute long song.  I like my metal like I like my women: fast, punishing, and in a 16-year monogamous relationship (hi, honey!).  The thing is, if you’re playing with potheads in mind, you have to take into account the hallucinogenic time dilation that occurs with a good burn… even 90-second ‘core songs feel like they last hours (or maybe that’s just because I don’t like ‘core).  Conversely, you have the ‘elastic distortion effect’, or what is commonly known as ‘I smoked a bowl 15 minutes before work and suddenly I’m six hours late’ syndrome.  Most stoner and many doom bands take this latter approach, which is fine if you like grim, trudging, sludgy darkness but not so great if you have to whiz every five minutes.

One of the few bands that fits my rigorous “short enough to bridge pee breaks” rule is Detroit, Michigan’s Acid Witch. I can’t remember where I first stumbled across this band, probably thanks to the heavy marijuana use I enjoyed throughout my high school years, which has severely damaged my short term memory.  And my long term memory.  And is responsible for the extra forty pounds I’m now lugging around.  But anyway…back to the review. (after the jump . . .) 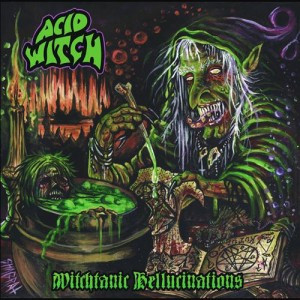 Yonkers, NY’s death/grindcore band “Mo’tician” is something of a parody act… taking a stab at Mortician, obviously, but from a completely gangsta viewpoint.  From the longer-than-the-song horror movie samples to the guttural beast-vocals, Mo’tician is very much death/grind, but with songs like “House By Da Geto” and “Afro Dismemberment”, you can see where they’re coming from…. wait.  Totally wrong review.  Damn you, devil weed!!

You have to admit, Acid Witch is a fucking cool name.  In fact it was the name and some of their song titles that totally sold me.  And their album art… total old-school death.  They have two full-length albums: Witchtanic Hellucinations (2008) and the apropos Stoned(2011).  In between they released the EPs Witch House (2009) and Midnight Mass (2010).

Witchtanic Hellucinations almost seemed like a gimmick album at first; with songs like ‘Witchblood Cult’, ‘The Black Witch’, ‘Rabid Werewitch’, and ‘Witches’ Tits’ (you see where this is going), I thought I was looking at another Nekrogoblikon (not that there’s anything wrong with that).  But there’s something different here that separates Acid Witch from the moniker of ‘mere gimmick band’: they actually sound good.

If you know Acid Witch, you will know one of their songs immediately when you hear it: vocalist Shagrat’s filthy death growl that sounds like he needs a lot of fiber in his diet and the chugging, doom-rock downtuned guitars of Slasher Dave are the band’s signature…assuming I’m not reading that backwards.  It’s tempting for people to compare every doom metal band to Black Sabbath, but I’m not going to do that here, because I’m better than that.  The only thing I can compare Acid Witch to is tripping out after eating poisoned candy given to you by a vestigial-nippled witch on Hallowe’en night in the year 1313.  It’s THAT good. 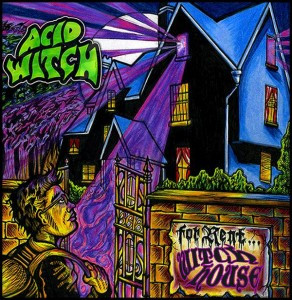 Some tracks to check out (IF YOU DARE): ‘Swamp Spells’ (off Witchtanic Hellucinations) is a psychedelic droning stomp… and check out the sound samples that accompany the intro.  Funky space-rock synth overlays the muddy growl and, weirdly, works.  ‘Metal Movie Marijuana Massacre Meltdown’ on Stoned is a bit of self-parody, I’m guessing, but it’s still a balls-out doomfest laced with shrieky solos. My absolute favourite song by these guys is ‘Worship the Worm’ from the Witch House EP.  It’s ugly, dark, and scary, and sounds like it was recorded in the bowels of Satan’s grow house.

I confess that the band’s aesthetic was a huge draw for me.  In interviews I’ve read, they cite everything from 80’s rock and metal to those old creepy-as-fuck ‘Hallowe’en sounds’ LPs you used to be able to get.  I love that kind of shit, and you can FEEL it in every Acid Witch song.  Seriously, can you feel that? It’s like some slimy tentacle-raping octogod is crawling up my back…. Hot buttery Christ on a biscuit! The titanic Hell-blur…black wings…the three-lobed burning eye! Eeeyaaagh!!!

Mo’tician Myspace page, in case you thought I was kidding: http://www.myspace.com/19112050

EDITOR’S NOTE: Well, you knew we weren’t going to let you escape without a song to hear. So, picking up on Trollfiend’s preferences, here we have “Worship the Worm” by Acid Witch: