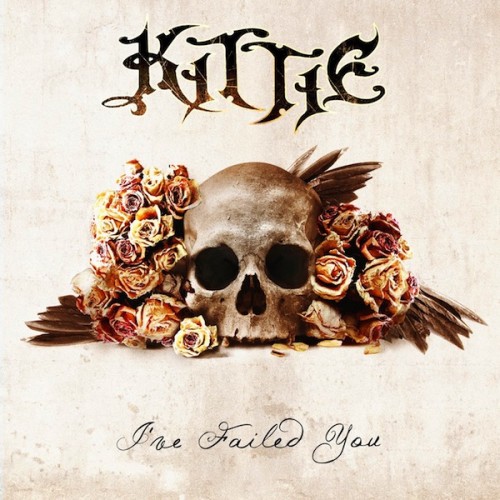 (Stop rolling your eyes! I know what you’re thinking: Kittie on NO CLEAN SINGING?!? But hold your horses and read Andy Synn’s review. You will be pleasantly surprised.)

Straight off I’ll say this – this is the best Kittie album to date. And I say that as a huge fan of both Oracles and Funeral For Yesterday in particular. However, I think that identifies the crux of Kittie’s occasional problems – the former is clearly the band’s heaviest record, while the latter is clearly their most darkly melodic, and the band have spent the rest of their time trying to marry the two together with varying results, the intervening and subsequent albums pulled in several directions at once by these competing pressures.

Like many of you (and indeed the band themselves at times), I would much rather ignore the existence of the execrable Spit, as the band really only developed into a proper musical entity with the release of the utterly devastating Oracles, whose self-loathing, Obituary-esque stomp and grind was lightened solely by  occasional injections of emotionally fraught, PJ Harvey-channelling clean vocals.

Since then, building from a core of steady, grinding riffs, harsh blackened screams and chilling, ethereal clean vocals, the band (primarily the Lander sisters) have slowly attempted to expand their sound, giving it more energy and life with a steady influx of snappier riffs (“Until The End”), expressive and expansive structuring (“Funeral For Yesterday”) and nuanced leads (“Into The Black”) which, when added to the unflinchingly precise drumming of Mercedes Lander, all mix to create a rich melting pot of ideas from which to draw. (more after the jump . . .) 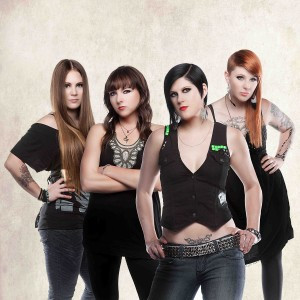 One could put forward the argument that the separate elements which make up the core of Kittie’s sound belong in different metallic sub-genres. Whilst Morgan Lander’s violent screams belong in amongst the most vicious of black and death metal bands, her smooth clean voice carries a more refined, melancholy air – this in itself is not a problem, as some of the band’s best songs feature this variance between clean and harsh vocals. The problem arises when the band’s material is similarly divided, the combination of the two serving only to accentuate the chasm between the different styles competing for attention.

Thankfully, this album sees the group recognising this issue and taking huge strides in the natural and flowing incorporation of this duality of sound and fury, resulting in a strong contender for anyone looking for a totally trend-free listening experience. The majority of the material is both well-written and well-performed, drawing the majority of its power and dynamic from how the band exploit and work around Lander’s evocative and expressive vocals. While her voice isn’t enough to completely save the weakest material, the unfocussed “Whisper Of Death” coming immediately to mind, it adds a real sense of drama and depth to each and every number.

Although not quite reaching the levels of 2001’s bone-grinding “Oracles”, when it wants to, this album can definitely bring the heavy, the opening title track “I’ve Failed You” immediately powering up with a stripped-down exo-skeleton of violent rhythmic shifts and pulsating piston-like riffage. Exploiting the inevitable process of cause and effect, the heaving guitar lines, speedy, whip-crack drums and larynx-scraping vocals – written and performed just right – serve to induce an immediate and involuntary response from the listener.

First single “We Are The Lamb” has a punchy, mid-paced groove accentuated by hanging guillotines chords, spiteful vocals and a squalling Hammet-esque solo, while “Empires (Part 2)” — following the flowing acoustic beauty of “Empires (Part 1)” — matches crunchy, neck-snapping power to a display of prowling malevolence, also managing to balance the band’s melodic and melancholic ambitions with their violent metallic catharsis. 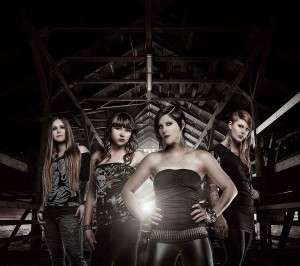 This run of quality continues with the one-two punch of “Coming Undone” and “Already Dead”, both of which pack some terrifically dense and heavy riffs into their sub-3 minute run time. “Coming Undone” hits hard and fast with a striking, driving delivery similar to the opener, overlain with some surprisingly nuanced lead parts and impressively organic shifts into soaring clean vocals, after which “Already Dead” grinds and growls with deathly fury, creating a sucking whirlpool of hypnotic, depressive leads and bulldozing groove.

The album gets a little wobbly with “Never Come Home”, an almost-ballad of a track where the juxtaposition of the tearful vocals and the storm-driven guitars sits awkwardly, despite the powerful and emotive mid-section, but regains its footing with the clattering and belligerent “Ugly”, where the tiny instances of clean vocals serve perfectly to offset the venomous harsh screams, while Mercedes Lander strikes cleanly and efficiently at her kit with controlled power and precision. The song’s catchy-as-hell chorus manages to be as infectious as it is nasty, themes of self-loathing and betrayal bleeding through the cracks in the almost impenetrable wall of guitars, while the penultimate slow-down positively crushes.

Though the majority of the album sees the group harnessing their heavy side more effectively than before, there are two distinctive instances where the moodier, dark-edged material connects even deeper, the bleeding vulnerability of Lander’s fragile clean voice soaring above the seas of wounded sorrow whipped up by the drunken, remorseful riffs and crawling pace of “What Have I Done”, playing those feminine Crowbar comparisons strongly and showing the flip-side of the band’s silver coin.

The second of these instances is on the depressing, emotive funeral march of the album’s final track “Time Never Heals”, which has an atmosphere as heavy and all-pervading as anything conjured by the more aggressive tracks, shot through with winding leads and penetratingly emotional vocal melodies, with a closing solo that weeps both sorrows and frustration in equal measure. 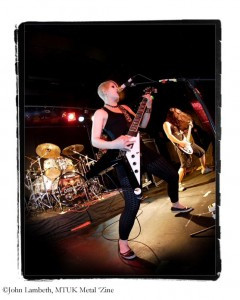 I’ve said before that Kittie need to pick a distinctive direction for their sound, but the more I listen to this record the more I am starting to think that with “I’ve Failed You” they have, barring the occasional mis-step, finally refined their formula almost perfectly. The heavy parts strike with venomous power, while the more melancholy material slithers with serpentine grace; most importantly, however, the group have managed to combine the two with more clarity and force than ever before, the two elements syncing up to form an organic symbiosis that accentuates both aspects of their sound, without detracting from either their melancholy beauty or their bestial fury.

EDITOR’S NOTE: I’ve Failed You is out now on eOne Metal. I have to join in Andy’s praise, and historically I haven’t been a Kittie fan. This album is most definitely worth hearing. Here’s “Already Dead“:

And here are the band’s official music videos for “Empires (Part 2)” and “We Are the Lamb”: