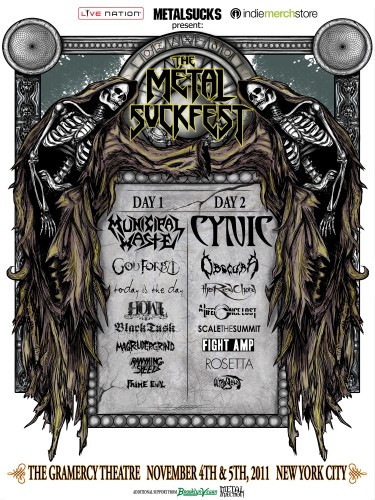 Yes, we are pimping the MetalSucks-sponsored METAL SUCKFEST again. When another metal blog succeeds in pulling off something this good, we will pimp the shit out of that, too.

Seriously, get a load of the almost-fully-revealed lineup for this show, which will be held in New York City on November 4 and 5. There are still 4 bands yet to be announced, and I’m already blown away by who’s appearing. There’s tremendous variety in the metal that will be on display, and the announced bands include some of my current favorites in the world of metal, including Today is the Day, Howl, Black Tusk, Magrudergrind, Obscura, The Red Chord, and Scale the Summit — and I don’t mean to imply that the others are only tolerable.

I have to make special mention of A Life Once Lost. There was a time, back when metalcore was a thing, when I would go for days without listening to anything but A Life Once Lost, and I’m usually the sort of listener that constantly flits from one band to the next when I’m in listening mode. I was massively disappointed when it appeared ALOL had broken up, and super-happy when I found out last year that they were back and working on new music. The latest word is that a new album will be coming in 2012 — the first since 2007’s Iron Gag. I would dearly love to see them at the SUCKFEST. (more after the jump . . .)

Alas, I’m not going to be able to make the trip east for this festival. BUT, NCS will be represented — BadWolf will be on-site covering the festival for us, accompanied by a very good photographer, and so we’ll have some SUCKFEST features for you in November. And we have another little goodie about this festival in the works, too. I’ll let that be a surprise when it happens.

Tickets for the festival will go on sale this Friday, September 9th, at 10am at LiveNation.com.

And because ALOL is now on my mind, here’s an oldie but a goodie:

4 Responses to “THE METAL SUCKFEST: ANOTHER UPDATE”