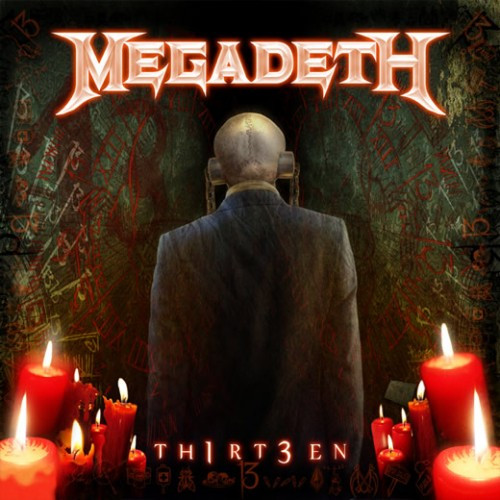 Let’s start with a confession: I can’t stand Dave Mustaine. Really can’t stand him. I do my best to avoid reading anything he says, but it’s difficult because  he just WILL. NOT. SHUT. UP.

Another confession: I’m not a huge Megadeth fan. Never have been. Among “The Big Four”, I was much more into Metallica and Slayer. But — I’m also bored shitless reading about The Big Four. All of them. BORED. SHITLESS.

I’m making these confessions so you’ll understand that when I say the new Megadeth song is good, it’s not the reaction of a slobbering fanboy or an effort by an ambitious metal blogger to give a knob-job to the Old Gods. I just really like the damned song. It’s called “Public Enemy No. 1”, and it started streaming today on the official Megadeth web page (here). Of course, it has already made its way to YouTube. Listen to it after the jump. It fucken rocks.

By the way, though I suppose it’s pretty damned obvious, the album cover art for the next Megadeth album, TH1RT3EN, has also been revealed. It’s by John Lorenzi.

35 Responses to “MEGADETH: A NEW SONG AND ALBUM ART”