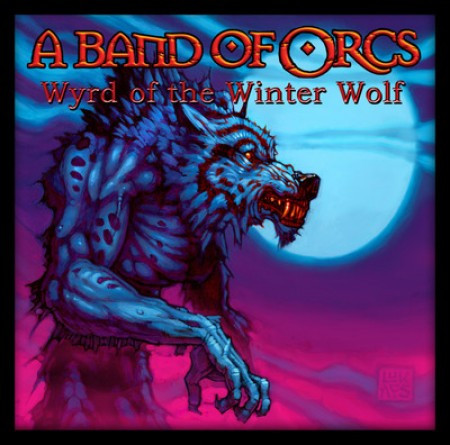 A Band of Orcs is a band of orcs who we discovered in October 2010 and included in a piece on “goblin metal”. They’re from that well-known congregating place for goblins, orcs, and assorted other vicious creatures bent on the subjugation of humankind — Santa Cruz, California. At the time of that previous post, A Band of Orcs had one release to their credit, 2007′s debut EP WarChiefs of the Apocalypse, which we described as “full of full-bore, superheated pummeling  – big, thick riffs hammering away at high speed, shrouded in sulphurous fumes and throwing up images of fang and claw.”

The orc clan have been at work on a debut album, which is currently projected for release next summer by a label called Itchy Music. In the meantime, they’ve recently vomited up a 3-song “single” called Wyrd of the Winter Wolf. The physical package includes the title track plus another new song called “Hall of the Frozen Dead”. Both of those songs also appear on the digital version of the single, which is being offered on iTunes and Amazon mp3.

In CD form, the “single” also includes as the third track A Band of Orcs’ cover of a Type O Negative song called “Green Man”, which we previously featured when it appeared on a Peter Steele tribute album that was released in April. It’s a rank piece of flesh-eating evil and therefore a nice addition to this release.

As for the two new ABOO songs, they sound pretty much like what you’d expect if orcs turned their attention from plotting the decimation of humanity and decided to work on some death metal. (more after the jump . . .) 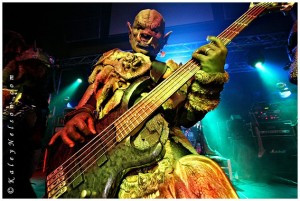 Imagine a black, cavernous pit, dimly lit by torches and shrouded in oily smoke, filled with a toiling horde of filthy, slope-browed, fanged brutes hammering away on some giant war engine while salivating with the taste for human flesh. Distorted guitars and bass grind away with a pummeling rhythm that you can’t help but bang your head to, while bestial chants ring out some undoubtedly horrific refrain. The drums are barely audible on the title track and only somewhat more present on “Hall of the Frozen Dead”, but the orcs blast away with plenty of groove regardless.

Skittering guitars accompany the martial stomp of the music here and there, and both tracks include a couple of diseased guitar solos, but for the most part this is an orcish version of old-school grinding, groaning death metal. It’s full of authentic filth and menace, and so of course I’m diggin’ it mightily.

Here’s “Wyrd of the Winter Wolf”:

[audio:https://www.nocleansinging.com/wp-content/uploads/2011/09/01-Wyrd-of-the-Winter-Wolf.mp3|titles=A Band of Orcs – Wyrd of the Winter Wolf]