(TheMadIsraeli provides a glowing, detailed, review of the new album from Textures, and following that we’ve got the album’s first official music video and more tracks to hear.)

This album I highly anticipate will alienate some longtime fans of this band who were expecting a Silhouettes part two.  Dualism lives up to its name — in fact, I was surprised by how much it honors the name on so many levels. Everything on this album is about balance.  Elements are so evenly distributed in their use that it makes the album unusually well-rounded.

Let’s get one thing straight at the outset: Textures isn’t djent. Textures is progressive groove metal, and this album proves it.  It includes songs that really weave hill-and-valley-laden sonic tapestries that take the listener on a journey, sometimes in durations as short as under three minutes.  This is an album that means business, a mission statement by a band really trying to put out the definitive word that they are playing their own game with their own set of rules and always have been. This album simply makes it official.

Duality begins innocently enough. Opener “Arms Of The Sea” starts out with an ominous dissonant lead, building the tension into a mammoth sludge riff filled with dark, southern swagger.  This may be the catchiest riff Textures have ever written, no lie.  The song lumbers on at its methodical pace, an odd choice for an album opener to be sure, but so effective once it clicks with you.  It’s got heavy parts, pretty parts, ascending build-ups and descending crescendos, diverse vocal delivery all over the map, and top-notch tasteful drumming by master of the kit Stef Broks. In retrospect, this song serves as a good summation of the album as a whole, although it may not seem so at first. 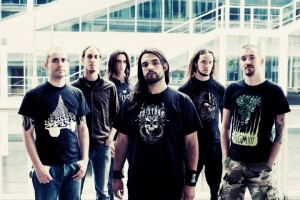 “Black Horses Stampede” sees Textures delving into… doom metal?  Why, yes it is. Massive, room-filling drones pervade the sonic landscape.  More heavy, filth-covered sludge riffs really hit home on this song, the dirge only being interrupted up by a soothing clean break in the middle.

“Sanguine Draws The Oath” starts with an explosion of frantic desperation before segueing into a somber, stoic, once again sludge-tinted riff, with great muted, reserved lead work overhead.  This is broken up by mid-paced death-metal-like riffing with Daniel singing clean vocal lines over an atonal section, which works perfectly.  Here we find some of that Textures’ jazzy melodic transitioning along with dynamic, bombastic melodic sections.  The song builds up to the sludge riff again, this time allowing it to drone out in the open, the depth of despair reaching doom metal goodness.

“Consonant Hemispheres” is another example of Textures creating music that is both heavy and gorgeous.  The opening is a serene clean section, which transitions into… drum and bass djent?  Yeah, that’s right, but the vibe it generates is profound.  I like the way this song completely switches gears halfway through, conveying more of a heavy rock vibe, increasing in heaviness as Daniel changes his vocals as the movement progresses.

“Burning The Midnight Oil” is a contemplative, sober instrumental piece, showcasing Textures’ capacity for creating layers of music.  Lots, and lots of melodic layers.  I like the way the song circles all the way back to its intro in a different key. 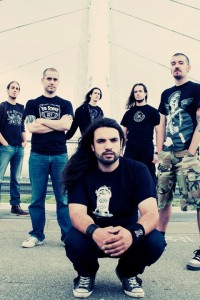 “Singularity” is the Textures people will know and love, bringing in heavy polyrhythmic assaults with giant ambient soundscapes to provide contrast.  This is guitarists Jochem Jacobs and Bart Hennephof doing what they do best.  This song is bombastic, it’s epic, and that breakdown at the end is fucking devastating.

“Minor Earth, Major Skies” wastes no time in following up the assault of “Singularity”.  With massive walls of melodic, dissonant chords and some thrashy riffing with ambient clean parts soaring above, this song is badass.  The construction of it REALLY sticks out, although every song on this album truly has its own identity.

“Stoic Resignation” comes at you like a fucking bulldozer, grooving the listener into dust particles with full fucking frontal force.  I love the second half of this song: The melodic waltz section builds up to a breakdown so pissed it makes you want to stomp a fucking hole in a concrete floor.  After that bit is over, the song leads into an eerie, ambient melodic section that introduces a final melodic chorus.  I may be purely speculating here, but this section sounds an awful lot like a sort of reprise of the chorus of “Singularity”.

“Foreclosure” is a mostly clean instrumental that ushers in the final track, “Sketches From A Motionless Statue”, a song with very jazz-like melodic sensibilities, bobbing and weaving all over the place, integrating both clean and heavy sections that contrast with each other about as effectively as you could want.  I love the way this song builds in aggression, starting out rather mellow and becoming heavier and more intense as the song continues, and then closing by coming all the way back around to the jazzy opening section.  It brings the album as a whole appropriately full circle.

With Dualism, Textures have put out a monster of an album, and a true musical achievement.  This is one of my top 10 bands of all time, OF ALL FUCKING TIME!  In this album, Textures have managed to both derail my expectations and force me to love what they have offered instead, and I have obeyed.

EDITOR’S NOTE: Dualism will be released by Nuclear Blast in the U.S. and Canada on September 27. The album and related merch can be ordered HERE. Textures are currently on their inaugural North American tour with Periphery, The Human Abstract and The Contortionist.  Remaining “Frak The Gods” tour dates are as follows:

And now, here’s the first official music video for the album, for the song “Reaching Home,” which was shot on the island of Lanzarote (part of The Canary Islands) off the coast of Morocco. Following that are additional tracks that TheMadIsraeli selected for your listening pleasure. And if you want more, the entire album is streaming at Guitar World.

One Response to “TEXTURES: “DUALISM””