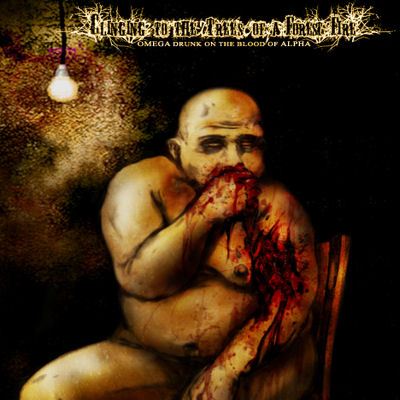 (In this post, NCS contributor Phro reviews an album by Clinging To the Trees of A Forest Fire as only Phro can.)

(Phro’s note: Clinging to the Trees of a Forest Fire is a Denver (woo!) funeral grind band (band’s words, not mine, but incredibly appropriate) that will rip your face skin off and then burn it as you stare hopelessly and slowly bleed to death.  Today, I listened to their 2008 album Omega Drunk On the Blood of Alpha.  It’s fucking amazing.  If you want to hear or get more of their music, go to their facebook page (http://www.facebook.com/CTTTOAFF) or their bandcamp page (http://ctttoaff.bandcamp.com/))

My screams are nearly drowned out by the robotic howl of the wind. 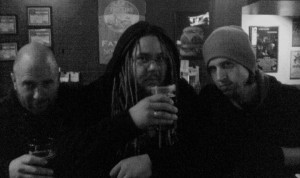 I winced.  I slowly, trepidatiously, looked down.  I fainted.

It was good that it was so fucking cold.  The cold air kept the…wound…from getting infected.  I thought.  Either way, when she fell backwards, she gripped so hard her ghost hand melded with the outer layer of my dick skin and…

I woke up in a small cabin.  My “down there part” was wrapped in bandages.  Hello Kitty bandages to be precise.  Everything smelled vaguely of roses and dill—like a ’60s comedy-romance movie about people who loved to fuck pickles.  I was numb all over, but I was still able to move around.  I assumed that it was just really excellent painkillers.  Either that or I’d lost all sensation due to shock.

I shook my head.  I wasn’t exactly sure where I was or why I was there.  I glanced around the room looking for candies—hoping, desperately, that I wasn’t going to be turned into some avant-garde Hansel.  Nothing.  There was a small fire going in a fire place.  But no pictures, decorations or even flowers neatly arranged in a vase.  In fact, there weren’t even any windows.

I cleared my throat.  It sounded like a couple of teenagers fucking in a graveyard, it was so loud.

I waited.  I thought I heard something in the next room, but I wasn’t sure. 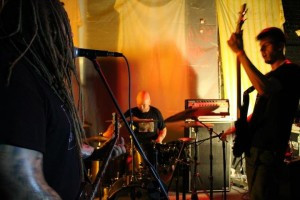 This time I definitely heard something.

Footsteps.  And clinking….like bondage handcuffs tapping against each other.  I swallowed my terror and waited.

Suddenly, an old, slightly wizened figure came around the corner and into view.  In the dark, it looked like a kindly old woman carrying a tea set.  As she got closer, the light from the fire fell on her and I could see that she was a bit older, indeed, and a bit plump as well.  But she seemed energetic and kind.

She held a finger up and pressed it to my mouth.  It was like my grandmother putting me to sleep, except she had much larger tits and I couldn’t help noticing them (uncomfortably) brushing against my arm.  Something moved in my bandages that I really didn’t want to move.

She smiled warmly and took a small portable MP3 stereo out from…somewhere.  Okay, maybe she really was magic.  She set the stereo down and pressed play.

The music that erupted from the speakers filled the room like a horde of angry souls who’d been set free from the place in hell reserved for people who died while stabbing other people in the face with sharp pointy things.  The voice that rang out from the speakers was less the voice of a tortured soul and more the soul of torture.

The woman slowly took off her buttoned sweater.  I was a bit surprised by the…clothing…or rather lack of clothing…underneath.  After removing her ankle length skirt, I realized she was wearing a leather corset and nothing but a leather corset.  I felt a twinge of terror rip through my body, but the drumming from the speakers was like a herd of elephants in titanium boots marching through a forest fire.  The drums pounded my chest into submission, and I swear each bass hit pressed me harder into the mattress. 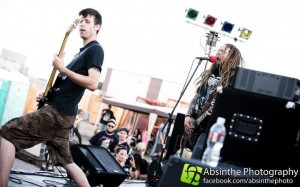 Then she touched…the bandages.  I opened my mouth to protest, but as soon as I parted my lips, the voice from the speakers ran down my throat and punched my heart and moshed through my lungs.  I struggled to breathe, let alone protest.  She slowly peeled the bandages away one by one.  I tried to move my arms, but they were bound by the wicked, torrential riffs.  As massive as the Nio statues standing in front of Todai-ji (http://en.wikipedia.org/wiki/Nio), the guitar and bass manifested themselves and held my arms down.  The monstrosities stared, unblinking, into my eyes.  It was kind of like being in detention, but with a little less fire and humiliation.

Soon, the bandages were off.  I was sweating bullets.  The music continued marauding ferociously around the room at breakneck sped.  Then, much to my horror, she put my ripped up, wounded, lifeless dangle in her mouth.  Suddenly, the music slowed to a lumbering funeral march.  The bass slowly rocked back and forth like redwoods swaying in the wind.  Time, for a moment, stood as still as eternity.

Then, life flowed.  The room grew as brilliant as a nuclear explosion, and I swear the walls caught fire.  The music raged and howled, and the kindly old lady did…things…with her mouth.  Time sped up and danced like a drunken Susa-no-o (http://en.wikipedia.org/wiki/Susa-no-o) through Amaterasu’s holy house.  But instead of a flayed horse and splattered shit, my cock grew back it’s skin.  And, then, time slowed again…the roar of anguish from the speakers stretched out for an eternity and the guitars and bass froze in horrified shrieks.

The old woman suddenly stood back and the ceiling splattered with tiny pieces of me.  The music slowly grew quieter and slunk back into the speakers, the voice still echoing in my ears and stalking the hallways of my heart.

Still erect in a glorious frenzy, I saw that my “down there part” was now fully covered in skin and glistening like a metal band soaked in sweat, with droplets slowly dribbling off the beardos’ chins.  I was relieved, but also kinda weirded out.  I stared at it in rapt appreciation for at least a minute.  Then I giggled a little.  Penises sure do look silly, don’t they? 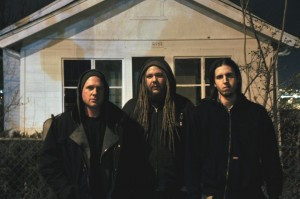 When I looked at the old woman, she was wearing her knit button sweater and the ankle length skirt and handing me a nice cup of tea.  She smiled kindly.

“Oh,” she said in a soft but firm voice, “don’t you worry none.  Ripped penis flesh ain’t nothing I can’t fix with a little help from Clinging To The Trees Of A Forest Fire and my magic.”

“Please return your trays to the upright position.”

I jerked awake.  I was in an airplane.  Headed…where was I headed again?  I couldn’t remember for a moment.  I looked at my MP3 player…Omega Drunk on the Blood of Alpha (http://ctttoaff.bandcamp.com/album/omega-drunk-on-the-blood-of-alpha) is a hell of a funeral grind album.

69 Responses to “CLINGING TO THE TREES OF A FOREST FIRE: “OMEGA DRUNK ON THE BLOOD OF ALPHA””