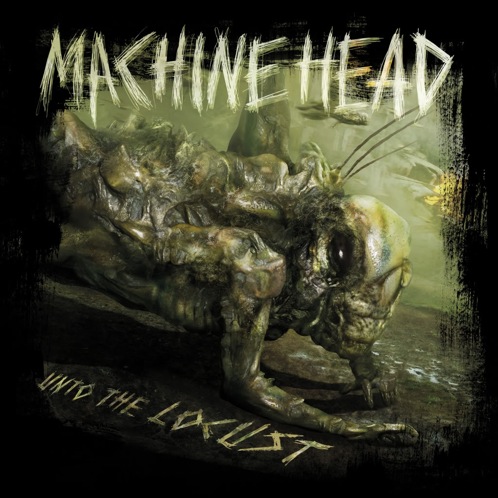 (TheMadIsraeli reviews the new Machine Head album, Unto the Locust, which is being released today on Roadrunner Records.)

It’s time for me to come out of the closet.  I AM A MACHINE HEAD FAN.  I mean yeah, I have no problem admitting that The More Things Change, The Burning Red and Supercharger are nothing but sonic packages of primate anus waste and that every copy of them that exists should be torched in the fires of mallcore hell — but the great albums from this band outweigh the bad.

Burn My Eyes?  Classic post-thrash, the epitome.  Through The Ashes Of Empires was a solid return to form, while using what was good about their… shall-not-be-named-again mid-period exploits.  And The Blackening saw Machine Head taking a respectably ambitious turn, risking looking like complete and utter posers and tools by expanding the scope of their songwriting, breaking into epic song lengths of up to 10 minutes.

Unto The Locust is this band’s best album since Burn My Eyes.  Indisputable this fact shall be.  This is an all-guns-blazing post-thrash assault that actually reveals the MH crew bringing back to the music their old 80’s thrash influences to a surprising extent.  There are even a lot of moments that recall Vio-Lence or Forbidden — bands in which members of Machine Head have previously done time. 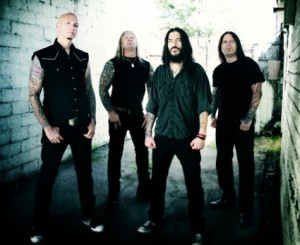 “I Am Hell (Sonata In C#)” starts with a nice surprise, a latin a cappella intro performed by Rob Flynn himself.  It sets a nice dark mood and is a surprising (and welcome) change in tone for the band as a whole.  A plodding march of chugging then ushers in the balance of the song, with slow pacing and vicious lyrics.  You’re left with a pretty strong impression that this is the song, thinking that it’s gonna keep going at this oddly slow pace for an opener — until a minute in, when things change.

The march ends in a power chord that rings out, and the speed then immediately picks up.  Technical riffing you’ve NEVER heard from Machine Head before is introduced, channeling a huge vibe of later-era Vio-Lence.  The song builds to an explosive flurry of low-tuned thrash riffing that really harkens back to the 1980’s.  It would be hard to believe that this is Machine Head were it not for the dark melodic chorus that finally recalls the band’s more modern influences.

The next thing I bet you’ll notice beyond the slight shift in style is that Rob Flynn sounds quite a bit more intense on the mic then he ever has before.  This is the first Machine Head album he’s sounded really into since Burn My Eyes, throwing himself fully into his own lyrics with conviction.  His vocal delivery is part of what makes this album fun.

You will hear two kinds of songs on this album: The first are songs like the opener, where the music is furious, fast, melodic and epic. “This Is The End”, “Pearls Before Swine”, and “Who We  Are” showcase this faster, thrashier style, all with epic acoustic intro’s to boot that get you pumped for the coming punishment. The second are numbers that recall Machine Head’s more familiar styles — songs such as “Locust”, “Darkness Within”, and “Be Still And Know” — though even these songs still evidence the band’s thrashier direction, albeit in smaller ways.

The album definitely displays the Machine Head you are well familiar with, but much of what is familiar are elements introduced only as recently as the last two albums.  The most prominent returning feature is Rob Flynn and Phil Demmel’s exceedingly proficient dual guitar antics, which took center stage on The Blackening.  Dave McClain is still one of the best drummers in the business, and Adam Duce’s bass rocks the bottom end like a steamroller crushes humans.

I think this is gonna turn out to be a surprise contender for this year.  I hope you all enjoy the album as much as I did. Here’s the band’s official lyric video for “Locust”, which premiered on Metal Injection:

11 Responses to “MACHINE HEAD: “UNTO THE LOCUST””