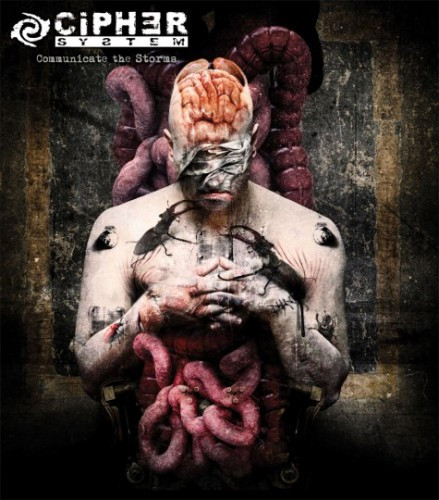 (TheMadIsraeli has been a busy metalhead. Here’s his second album review for this Monday.)

Cipher System from Gothenburg, Sweden, were something of an adored cult band in the early 2000’s with their debut Central Tunnel 8. Loved for its complex melodic layers with sci-fi synths, intricate guitar interplay, and excellent changes in tempo, the album delivered a sound and feel all its own. Now Cipher System are back with a new album after 7 years of hiatus. How does it hold up? I’m happy to tell you that it brings back the classic formula of Central Tunnel 8 with some very welcome improvements. This is Communicate The Storms.

Cipher System definitely know how to deliver the melodeath sledgehammer to the face. Opener “7 Inch Cut” is a slow choice for an album starter (I seem to be reviewing albums with non-conventional opening tracks lately), with staccato’d chugs conveying stoic solitude, while Blade Runner-styled synths hang overhead. It conveys a mood of deep sorrow, a theme that persists throughout the song in its musical approach. The anguished vocals of new vocalist Karl Obbel tear away at your soul, like a hungry abyss waiting to consume you. The waltz-like cadence of “7 Inch Cut” makes the song feel like an extended intro, like the opening credits-roll of a movie, and THAT is really cool to me.

“Forget To Forgive” is where the album really “starts”, as it were. A thrashy riff in very Soilwork-ish fashion blows up in your face and ignites the stage. The verse is a badass, full-steam-ahead, machine-gun chug-fest, complemented by totally awesome synth work, which changes in tone every time the verse rolls around. The chorus on this song is one of my favorites, with clean vocals and anguished screams delivered exactly in unison. 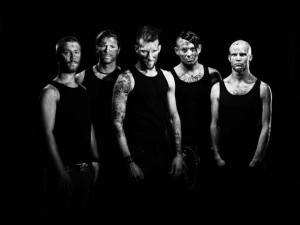 “Communicate The Storms” grooves with melodic fury after an almost medieval-style intro. There is some serious stomp here and absolutely great riffs (as in the pre-chorus and chorus) as well as a recurrence of the theme established in the intro. This song remind me of Insomnium, only set apart by the synth work, which lends the song a more modern edge.

“Gods Terminal” opens with an ear-catching synth line, ushering in a supernova of blistering low-end riffing and machine-gun double-bass assaults. You’ll notice by this point on the album that the guitars have taken a back seat, or at least shared their seat, so that they and the synths in unison can develop powerful soundscapes. This song is one of the best demonstrations of that on the album.

The formula for Communicate the Storms album is pretty straightforward, and you’ll pretty much understand the entire thing after hearing the songs described above. This is modern melodeath that is just plain good, overtly epic, and charged with emotion. Some of the melodies on the album are truly inspired, and the performance by the musicians is top-notch, all working in harness to create an overwhelming product. If you want my personal favorite of the album’s tracks, it is definitely “The Stairway”. The power there is uncompromising.

Central Tunnel 8 may be 7 years old, but Cipher System is definitely back and deserving of attention again. I highly recommend you get this album.

EDITOR’S NOTE: Communicate the Storms will be released October 11 (tomorrow!) by Nuclear Blast in North America. For more info, visit Cipher System at: