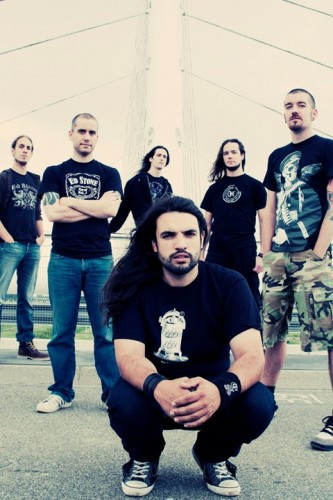 (Textures‘ new album Dualism has been making quite an impact. We sure as hell liked it here at NCS, as reflected in TheMadIsraeli’s review. Now TheMadIsraeli follows that up with this interview of the band.)

Hello there! First off, how are you all doing today? I’m honored to even be doing an email interview with you guys, you’ve been one of my favorite bands since Drawing Circles.

Hi! Very good! We just got back from the USA tour these days, so life is turning back to normal again, getting used to the European rhtyhm again, and we’re preparing for the upcoming release shows.

I’m curious to hear from you guys, how does it feel to be on your 4th album now?

It feels natural haha, it’s just what we like to do! Time flies when you are having fun! We are very proud when we look back at all the 4 albums, and if we had to do it again, we would have done it the same way i think.

So you’ve just wrapped up the Frak The Gods tour. In hindsight, how did you enjoy the tour and what were your favorite or favorites of the three other bands on the bill? I know you guys love The Contortionist for example.

Yeah that band has really amazed us, it’s a great live band, and their sound and set was ultra steady, each night! I must say i didn’t know them before this tour, so for me it was a double surprise, just awesome to watch, every night. And great guys as well! Periphery and the Human Abstract are fun to watch too, great musicians!

Being a guitarist myself I have to geek out a bit and ask, what gear do Bart and Jochem use? Guitars, pickups, heads and cabs specifically.

We use Mayones guitars, which are amazing, with Seymour Duncan pickups. We use a simple live setup; it’s a Peavey 6505+ and a TC Electronics G-Major for effects like delays and chorus. That’s all!

I stated in my Dualism review that you guys had achieved a perfect 50/50 balance of soft and heavy parts. It’s still signature Textures, but the approach to the album seemed to really fall in line with the album’s title. Was this intentional or did it just happen that way?

It just happened that way haha! We chose for more soft parts to give the album more space, and to leave some space for vocals for example. We wanted the album to be not too tough on the ears, while still keeping it very heavy.

A million interviewers have probably asked you the dreaded “how do you feel about djent” question, so, to try and put a slightly different spin on it… you guys have obviously been quite influential in the djent scene, have you ever heard yourselves in any of these bands? If so, how does that feel to hear your sound being given credit in someone else’s?

Yes, we don’t hear real djent in our music, but we do hear that our sound has been influential, the djent stuff is very creative and has very original rhythms mostly. The way those band play with patterns we recognise a lot, it is a different way of thinking. But most of the bands have the same sound, and get lost in that a bit, and then they lose focus on the real songwriting. Only the big ones like Tesseract and Periphery grow out of it and keep on writing, they have found their own sound now.

Are we ever going to see Textures move to eight string guitars?

Hahah, nope, we stick to 7-string for a while! There is still so much to explore on a 7-string!

For all members of the band, name your favorite song off Dualism.

I think for all of us it’s “Singularity”; it has all the elements that Textures stands for right now.

What are the post-tour plans for you all?

Right now we have a few big release shows in Holland, then a UK tour and some German and French shows. Early 2012, we want to do a European tour, in summer 2012 all the summer festivals, and then by the end of 2012 back to India or the USA if possible! Also Australia is on our wishlist..

What are your thoughts on the current state of the music industry? Piracy in particular, and how exactly has piracy effected you?

It’s a tough industry, but i think music and bands will always find a way to keep going. Labels are having a harder time than bands i think; bands can still thrive off merch sales. But as long as people keep buying albums and labels make some cool special editions which you can’t download (DVDs with a cool booklet or CD tray), there is still a long way to go before it all collapses i think.

How was it working with Daniel as opposed to Eric, and how exactly did Daniel come into the picture? Eric was a tremendous part of your sound. It must have felt like quite a task to find a good replacement.

Yeah we were desperate! Hahah it’s true, it was a big shock for us. But luckily we found Daniel quite soon. Eric suggested him, actually. They went to school a while before Eric joined Textures haha. We knew Daniel already, so we just asked him. We are very happy he said yes immediately, or else we would have been searching still right now, i fear.

Assuming you’ve had any time to, have you already began formulating any new song ideas?

Yep, we have still some quite new stuff left from writing, so we will go on with that, and we always keep writing in between albums, we just have to deliver! When the next studio time comes, we will filter all the ideas we have, until only the best is left, and create songs from those.

How do you plan to finish out this year?

Some big release shows, and a little tour to end the year with, then a small break to prepare one hell of a touring year in 2012! We’re just getting started!

Well I think that’s about it. It was really cool to be able to do this! Maybe there will be a next time in which we can do this real time eh? I hope things keep going as well for you as they appear to be. You all deserve it!

4 Responses to “AN NCS INTERVIEW: TEXTURES”