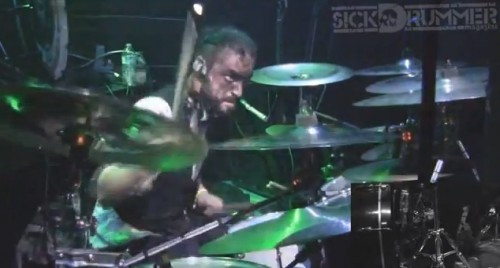 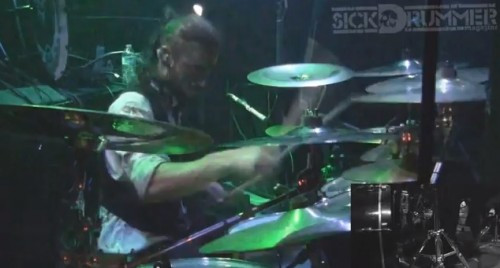 Last night NCS co-founder Alexis and I went out to Seattle’s Studio Seven and met up there with our friend Travis for a bit of vigorous headbanging. There were massive attractions on the bill, starting with one of our favorite combines of local dudes, Blood and Thunder (whose new album we’ll be reviewing shortly). In talking with them after their set, we learned they’re recording a new song and we got a look at a new piece of artwork that will likely appear on future merch — it’s a huge eye-catcher, and I hope to splash it all over NCS soon.

And then we got the chance to see another Seattle band who I’ve heard good things about — black metallists Funeral Age. Their set was killer and I’ve now got their latest album, which I’m looking forward to ingesting. More likely, it will ingest me.

After that was a surprise — Rings of Saturn from California’s Bay Area. I didn’t know these maniacs were part of this show (they weren’t listed on the Studio Seven web site), but man, I’m glad they were. They’ve now got a new 7-string bass player and a new man-mountain of a drummer, and they delivered a high-energy blast of technical death metal. The calculatingly dead-pan stage banter of their frontman Peter Pawlak was also funny as shit.

And then came the band Alexis and I really were there to see — Fleshgod Apocalypse, who were making their second Seattle appearance of the year, after their all-too-brief set on the SUMMER SLAUGHTER tour stop. We moved up close to the stage for this one and just got completely mind-blown. We weren’t the only ones. The floor crowd was clearly eager for this set and exploded at the same time as the band’s first song exploded. So, in addition to getting mind-blown, we got treated to non-stop body slamming until the set ended. It was fucking spectacular. I didn’t think it was possible for me to become any more enthusiastic about FA than I already was, but yeah, it happened.

And then, we sort of lost the rest of the night’s music, missing out on Decrepit Birth and Decapitated, because we got engrossed in conversation at the tour bus with FA guitarist Cristiano Trionfera, later joined by Francesco Ferrini (keyboards), frontman Tommaso Riccardi, and drummer extraordinaire Francesco Paoli. More about that after the jump, plus another jaw-dropping Francesco Paoli drum-cam video that SickDrummer released yesterday from FA’s performance on October 11 in San Francisco.

The discussion with the FA dudes wasn’t an interview, though Alexis, Travis, and I quizzed them incessantly about whatever popped into our addled heads. But since it wasn’t an interview and I wasn’t taking notes, I’ll just say that they all reinforced the impressions they made when we spoke with them at SUMMER SLAUGHTER: These are some genuinely nice, open, unpretentious people. They’re smart, they’re incredibly dedicated to perfection in what they’re doing, and they’re having a blast riding the huge surge in popularity generated by their latest album (Agony) and extensive touring of North America this year.

I don’t mean to leave bassist and co-vocalist Paolo Rossi out of this post — we saw him before the FA set, and he also couldn’t have been more warm or engaging.

It’s not necessary that musicians in great metal bands be nice or smart or articulate. After all, it’s the music that matters most to fans like us. But it’s a huge plus when you see it, and we saw it last night. It made a great evening of music all the more memorable. Fuck, even the very serious, very intense Francesco Paoli gave me a hug before going back into the bus.

And that brings me to the drum-cam video. I wanted some kind of film of FA playing live to include with this post, and when I went looking I found by coincidence that this clip was just released yesterday. The song is “The Violation”, from Agony. It was filmed at the DNA Lounge in San Francisco just a few days ago. It’s a helluva thing to watch and hear. After the video is a schedule of the remaining dates on this NorthAm tour. If you’re in the vicinity of one of these venues, this is a show that’s definitely worth seeing.

UPDATE: I just found that new Blood and Thunder artwork: 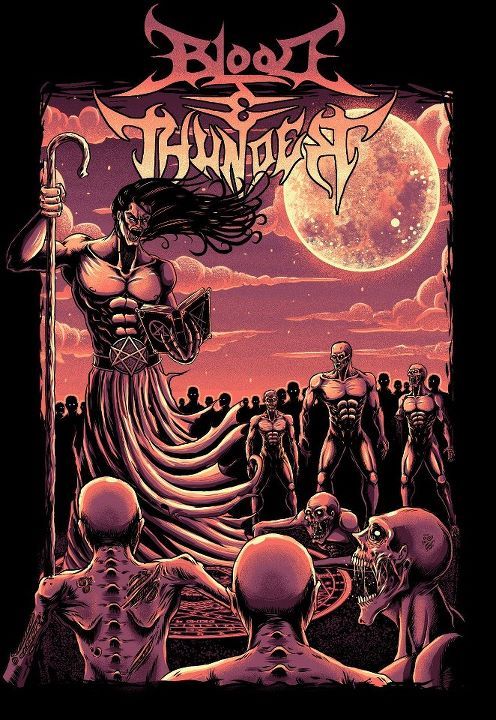 32 Responses to “MY NIGHT WITH FLESHGOD APOCALYPSE”