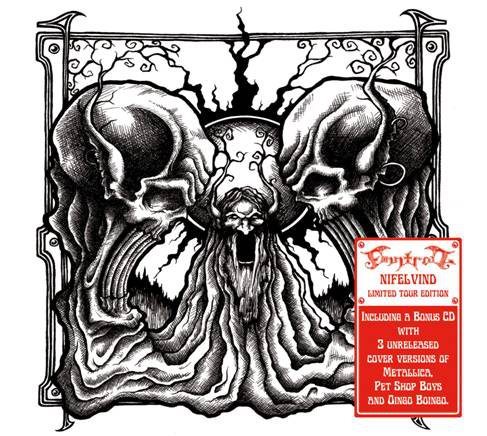 A month ago I posted a news item about Finntroll that intrigued me: In conjunction with the launch of a European tour called Heidenfest (which is still going on), they released a “tour edition” of their excellent 2010 album Nifelvind that included covers of three songs that I had a tough time imagining them playing: “Insect” by Oingo Boingo, “Can You Forgive Her?” by The Pet Shop Boys, and “The God That Failed” by Metallica. This last Finntroll cover was previously included in a 20th anniversary tribute to The Black Album that Metal Hammer compiled and released this past summer, but the song included on the tour edition has an alternate ending.

Of course, as a died-in-the-wool Finntroll fan, I had to get this tour edition, (a) because as cool as I wish I were, in reality I’m just an embarrassingly obsessive metal nerd, and (b) because I’m a died-in-the-wool Finntroll fan. It arrived in the mail on Friday. It features new artwork by the band’s guitarist Skrymer (which you can see above) and an extra CD that included those three cover songs. It’s being sold at CMDistro. If you’ve already got Nifelvind, you’d really have to fall into Category (a) or (b) like me to get this, because all you’ll be getting for the money that you don’t already have is the nice new digipack cover art and those three songs.

To help you make up your mind, I’m going to stream all three of the covers after the jump. My favorite is the Metallica cover, maybe because it was a metal song to begin with, but the other two are more appealing than I thought they’d be. As I should have known from listening to Nifelvind and Nattfödd, this band is capable of performing well in a wide variety of musical styles, and as groverXIII pointed out in a comment on the earlier post, I should have been able to imagine the Pet Shop Boys cover from listening to “Hel Vete” on the Trollhammaren EP (2004).

“CAN YOU FORGIVE HER?”

[audio:https://www.nocleansinging.com/wp-content/uploads/2011/10/02-Can-You-Forgive-Her_-Pet-Shop-Boys-Cover-Version.mp3|titles=Finntroll – Can You Forgive Her (Pet Shop Boys Cover Version)]

“THE GOD THAT FAILED”

Here are the remaining dates on the Heidenfest tour, which includes Turisas:

12 Responses to “FINNTROLL UNDER THE COVERS”