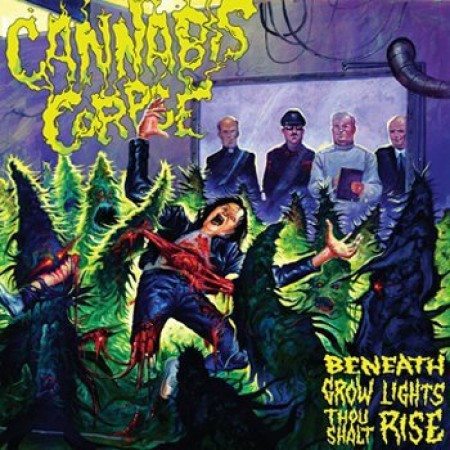 Here’s the second song of four for this morning, and this one’s a video that surfaced yesterday. The band is Cannabis Corpse, and the song is the brilliantly named “Gateway To Inhalation”. It’s from their 2011 album, the brilliantly named Beneath Grow Lights Thou Shalt Rise. You gotta love a band who’s into gardening. Here’s the story about this video, as reported on Metal Injection:

“Last Saturday, October 8th, 2011, Cannabis Corpse’s van broke down and they missed their slot on the “Ritual Tour” that night with Black Dahlia Murder and All Shall Perish in Lancaster, PA. Through the band’s Facebook page, they were able to put out the word that the band wouldn’t make it and asked if anyone could help out with a DIY late night gig in the area.

“Rich ‘Bebo’ Abraham of Richolow Films, a Lancaster based metal music video company [link] got in touch [with] the band and coordinated a show for Cannabis Corpse right down the street from the BDM show to start at midnight. The guys made it to the venue in time to watch BDM and after the show marched with 100 local thrashers to a small venue up the street. A complete rager commenced. Richolow Films caught it all!”

Now THAT is fuckin metal. So is the video. If you know Cannabis Corpse, you know this ain’t gonna be stoner rock, despite the band’s name. It’s a blast of death-thrash, heavy on the partying. From the video, looks like it was a high old time in the house. Have fun after the jump.

THANK YOU METAL INJECTION for this one! And that you to TheMadIsraeli for the tip.