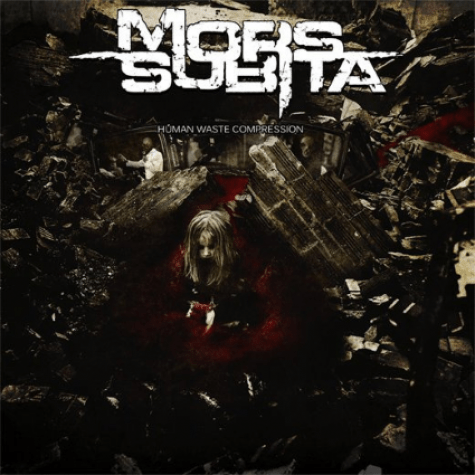 For a band I like as much as Finland’s Mors Subita, I’m inexcusably late in reviewing their debut album Human Waste Compression. I’ve been listening to it off and on since long before the September 21 official release by Violent Journey Records, and it hasn’t worn out its welcome.

The band’s winning formula combines elements of thrash, groove, and Bodom-style melodic death metal. The music moves like a racehorse burning up the track, with slamming beats, frenetic riffs, and swarming guitar solos. Antti Haapsamo snarls like a really pissed-off bobcat, backed by bear-like roars. Put all that together and you get 11 tracks of modern metal that are electrifying and head-whipping.

The musicians can all really fly, the guitars and the heavy metallic sound of the bass generating rapid, jabbing pulses, their rhythms working seamlessly with the heavy artillery blasting away from the vicinity of the drum-kit. The rhythms have a pneumatic, almost industrial quality to them. The band also benefit from a talent for creating short melodic choruses via the lead guitar (or through dual-guitar harmonies) that are catchy and invariably will get your foot tapping and your head nodding. (more after the jump . . .)

Did I mention the guitar solos? The very talented Mika Lammassaari has created one for each song, and they’re excellent. As he builds each one, generally accelerating and climbing the tonal scale as he moves from beginning to end, he gets your blood pumping, and by the time they top out, he’s fuckin ripping.

Right smack in the middle of the album is “Entrance of Sickness”, the only change-of-pace song on the album. The music is still hammering, but at a slower, more stately pace. The contrast is further enhanced by the vocals. For almost the entire the song, they’re the deeper, bear-like, guttural variety. All that, combined with a melancholy melodic theme, create an aura of darkness that’s unique on the album. (The song also includes a particularly soulful, attention-grabbing guitar solo.)

As for the recording itself, there’s a bright, sharp, steely quality to the production that suits the up-beat, groove-heavy, manually dextrous style of the music.

Mors Subita’s music includes elements that remind me of DevilDriver, Daath, and A Life Once Lost, in addition to the afore-mentioned Children of Bodom. In short order, Mors Subita has joined the ranks of Finnish metal bands that metalheads the world over need to know. They will put an evil smile on your face.

In previous posts we’ve already featured two official videos for songs from the album, one called “Burden”, which you can see here, and another for “Sermon” (here), but I can’t resist putting up two more songs for your headbanging pleasure. I suppose it goes without saying, but I recommend you pump up the volume for these babies: