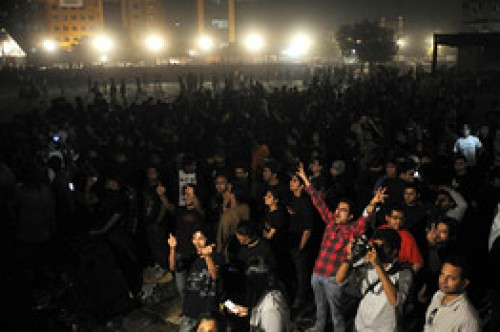 On Friday night (Oct. 28), Metallica was scheduled to play a concert in Gurgaon, a suburb of Delhi in India. It was to have been the first stop in Metallica’s first tour of the sub-continent. Tickets to the show were priced between the equivalent of $34 and $57, and the concert had drawn fans from cities across India as well as countries such as Bangladesh, China, Nepal, Indonesia and Singapore. Unfortunately, it never happened.

After more than 20,000 fans waited for more than 3 hours at the venue (including a two-hour delay in being allowed inside), an announcement was made that the show would be postponed to the following night due to “technical difficulties”. News reports indicate that Metallica (or their representatives) were unhappy with the audio systems and the adequacy of the security barricade that would separate fans from the stage. It also turns out that the tour organizers (from an outfit called DNA Entertainment) had over-sold the 25,000-person capacity of the venue.

Many of the fans didn’t take the postyponement news very well, particularly when it was learned that Metallica was taking part in a press conference at the same time. Although most left the venue calmly when asked to do so, others rushed the stage, damaged equipment, and some even attempted to set fire to banners. And that led the organizers and Metallica to cancel the Gurgaon show altogether.

Early Saturday, police arrested the “operational head” of DNA Entertainment and three other company employees, charging them with fraud and cheating. (more after the jump, including video . . .) 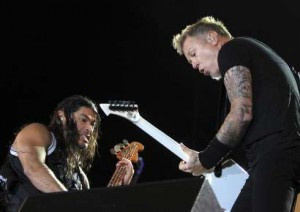 All the press attention given to the mismanagement of the show and the rioting prompted Indian metal musicians to speak out quickly. They are obviously concerned that this episode, like other fuck-up’s in the past, will deter big-name foreign metal acts from planning Indian tours. Here’s an example of such a statement, from Demonstealer of perhaps India’s best-known metal band, Demonic Resurrection:

“All said and done,MESHUGGAH, LAMB OF GOD, SEPULTURA, PORCUPINE TREE,OPETH, HAMMERFALL, MACHINE HEAD, JOE SATRIANI, IRON MAIDEN, KATATONIA, POETS OF THE FALL, SATYRICON and a dozen other international metal artists have played in India, and I can safely say they had a fantastic show, great appreciation and love from the metal fans in India. So it sucks that one terrible incident by a few c**ksmokers ruins it for the rest of the people in India. But as an Indian, I can safely say this doesn’t represent India or Indian people or Indian metal in any way.”

More comments from Indian bands can be found here.

It would be a shame if the Indian metal scene got a black eye over this event. Metal in India is a fast-growing movement, and here at NCS we’ve tried to spotlight some of the music in our posts. It’s only a matter of time (I hope) before the music of more Indian bands breaks out and catches on internationally. Getting prominent internationally known metal bands to tour India can only help the Indian scene grow and bring more attention to Indian bands.

But honestly, my first reaction to this story was not a negative feeling about Indian fans or corrupt tour management. My first thoughts went something like this:

1.  Man, if I’d spent hours getting to the venue and hours more waiting around with my thumb up my ass, only to be told the thing was postponed, I’d want to bust up shit, too.

2.  Metallica are a bunch of fucking prima donna’s. I mean, how bad does a sound system have to be for you to no-show 25,000 fans? And what the fuck is up with complaints about the security barricade? Did they think they were about to play for a bunch of animals?  How many metal bands play in clubs and even bigger venues with no barricades at all?

And on the subject of just how bad was the stage set-up, check this out, as reported by Blabbermouth:  “A METALLICA crew member, who was packing up the sound system late in the evening, when asked about the situation, told The Times Of India that he was clueless. ‘I have no idea at all. I was getting ready to play the show, and then I was told it wasn’t happening,’ he said.”

Well, I wasn’t there and I may be way underestimating the safety risk that a band like Metallica incurs when they play in front of 25,000 fans, but this whole thing still puts a bad smell in my nostrils, and it smells like . . . Metallica.

The original Blabbermouth story I saw about this fiasco (here) includes a variety of video news reports about this story. I’ll just put one of them here, which includes footage of the unpleasantness at the venue:

Metallica is scheduled to play in the southern Indian city of Bangalore tonight. In light of what happened on Friday night, an extra 1,000 police will be on hand.  Good times.

UPDATE: NCS writer TheMadIsraeli sent me this link to a write-up about what actually happened at the venue by an Indian metal fan who was there. Reading this makes me even more pissed off at Metallica. Fucking atrocious.

22 Responses to “DUST-UP IN DELHI”