Until yesterday, I’d been a bit scarce around NCS recently, mainly due to illness, school being fucking lame, and the well being rather dry in terms of good shit for me to review.  I’ve only got five major reviews on the horizon that I give a damn about at the moment — Vallenfyre, Demisery, Vildhjarta, Vektor and Ever Forthright.  So as you probably guessed, this ain’t none of that reviewin’ shit.  Instead I’m gonna just talk.  Talk about stuff within metal, within the scenes, share my thoughts.

I figured a good start would be to talk about this djent thing.  I just reviewed a djent album in Uneven Structure’s Februus (here), and two of my above-mentioned choices for future reviews, Vildhjarta and Ever Forthright, are also djent bands.  I know that before I hopped on board with NCS they covered Ever Forthright quite a bit here, though Vildhjarta not so much.  Fuck, part of the reason I think I was picked up to write for NCS was to be the designated “djent guy”, since it was an interest of mine outside the tastes I shared with the other writers.  So I thought, finally, I might try to collect my thoughts about djent. 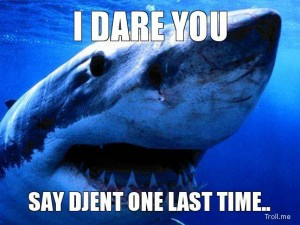 When it comes to metal, I’m usually quite the speed freak.  If it isn’t blazing technical riffs at G-force multiplying speeds, it usually doesn’t do anything for me.  Looking back, this is why I absolutely FUCKING HATED the 90’s.  EVERYTHING was about “the groove” and “if it made your head bob”.  Groove metal had finally taken root, and it wasn’t going away.  I absolutely hated Pantera, and when every band in the world started thinking that playing an open-string riff alternating between two frets made them a god. I just couldn’t take it.

As you could probably guess, this is where my affinity for thrash metal kicks in.  It’s not that I essentially hated all groove all the time, but it was the absolutely brain-dead way in which it was applied and practiced by so many bands.  If Suffocation got into something like the breakdown in “Infecting The Crypts”, you bet I was all over that shit.  But when it came to this bouncy, jump-da-fuck-up bullshit practiced by bands such as Slipknot, Soulfly in their earlier material, or the heavier hardcore bands like Throwdown and old Hatebreed, I felt like my intelligence was insulted.  I certainly did become one gigantic asshole of an elitist, there is no doubt about it.  Nothing could penetrate my true metal warrior armor. But then this came along in 2004 . . .

This was like, I dunno, THE BEST FUCKING THING EVER!?

Meshuggah are a band about whom I don’t need to say much, or so I would hope.  To my way of thinking, these guys INVENTED (or reinvented) groove, with the mighty Nevermore right behind them.  I went on a Shuggah’ spree, acquiring everything they had out at the time (my first purchase being the original pressing of Nothing when it sounded like ass, but was still awesome) and was pretty in love.  Songs like “Soul Burn”, “Stengah”, “New Millennium Cyanide Christ” or honestly, just about every single fucking other thing Meshuggah ever laid to audio, pulled me in.  The syncopation and the polyrhythms gave groove the much-needed depth I’d been looking for; it made it interesting.

Soon after, I discovered the formidable Textures, and these two bands were basically all I ever needed to get a groove fix.  When I caught onto Meshuggah and Textures both, that was about the time when the deep bowels of the metal underground started to surge with an intense interest in this odd mix of syncopation, polyrhythms, heavy use of ambience, and erratic song structure.  This surge was generally happening in isolation from the rest of the metal realm, mostly confined to the legendary forums of sevenstring.org.

There were a few key musicians, though, who were doing their thing, fucking around at a formative time, and  they became quite influential in djent’s mainstream take-off — Misha Mansoor of Periphery, Acle Kahney of TesseracT, and Adam Nolly of Red Seas Fire, among others.  I had no idea this was happening, and many other metalheads didn’t either.  We now know that all of these guys and their respective bands are doing pretty well for themselves and have brought djent into the limelight.  But, I still haven’t answered the question.  What do I think of djent?

Now, I didn’t always think that, mind you, but for several reasons I’ve come around to that way of thinking: The word “djent”, the community centered around it, the scene kids, the desensitization of the style for commercial or widespread appeal, and the butchering of original-sounding production due to its foundation in totally digital recording technology.

Let’s start with the scene-kid problem, which actually almost entirely encompasses every other problem, because all the rest derived from scene-kid infiltration of the djent scene.

Somewhere along the line we have to agree: Scene or core kids fuck everything up that is worth a shit in the world of heavy music.  They destroyed melodeath with metalcore, butchered (for the most part) death metal with deathcore (though some metalcore and deathcore has turned out to be quite excellent), and have now crept their way into djent, morphing it (as they usually do) into a totally half-assed version of what it once was .

Nowadays we have bands considered djent with totally core vocals (that sound like every other core band in existence) who use no polyrhythms, no odd time signatures, AND SOMETIMES NO FUCKING SYNCOPATION.  All they have are 7- and 8-string guitars and a load of unnecessary clean and ambient overlays to boring, open-note grooves that are, dare I say, worse than the drivel Slipknot put out.

There is a tendency in the djent community to throw a trivial-as-shit fit anytime you try to pigeonhole the music. The scene is populated by usually-core kids who want to insert their tired formulas into everything and now have an excuse to do so, while pounding the idea that music shouldn’t have boundaries.  So essentially, you have a group of people who argue for not pigeonholing a subset of heavy music in words, so they can fucking pigeonhole the subset of heavy music in audio by doing the same shit over and over again WHILE STRIPPING AWAY THE FUCKING IDENTITY OF THAT SUBSET OF HEAVY MUSIC.

The word “djent” is also a huge problem.  I use the word djent for now because when I use it, you will know, or at least get the general gist of, what I’m talking about, but I seriously wish I didn’t have to fucking use it.  The music is essentially progressive groove metal, but the term “djent” is so popular now that it isn’t practical for me to say progressive groove metal.  It is a stupid word and needs to be changed.

The fact that “djent” is now a verb as well as a noun drives me even more nuts.  If another asshole tells me about how much a band djents, or how a band does a lot of djenting, I’m gonna puke.  Naming a genre after a muted four string power chord is just… a frustrating thing, and feeling confined to use of the term is even more frustrating.  But I’m using it, for now anyway.

I also dislike the growing trend of ultra-slick, ultra-clean production.  I don’t like albums to sound like shit either, but I remember when an album AS A WHOLE used to be a piece of art.  The music, the mix and the artwork combined to create one singular product.  Nowadays, mix is too often cast aside as an integral tool for conveying the songwriters’ conception of the music, and in its place we have nothing more complicated than a simple desire to make the music shiny and pretty, because that sells better. This may be nice sometimes, but this approach to production also steals part of a band’s identity.   Many bands today sound the same because everything is done via Axe-FX recorded guitars and bass with Superior or EZ-drummer replacing a real person on the kit.  It’s very disheartening, and it’s getting quite old.

One of the things I absolutely loved about Aliases when I reviewed Safer Than Reality (here) was that it was an essentially organic recording.  The guitars were captured with mic’d rigs, and the drums were 100% mic’d and authentic.  Aliases have a sound all their own in audio as well as in spirit, AND I THINK THAT’S A GREAT THING!  Let’s not forget that the djent community practically sits in a circle jerking off over various production techniques, and so many of the songs ALL SOUND THE FUCKING SAME WHEN SAID AND DONE IN FINAL MIXES.

Also, did I mention how much the overabundance of electronica and dubstep influence in more recent djent pisses me off?  Yeah, it does.  It would also be nice if bands would stop using ambience as a crutch and a replacement for interesting riffs.  I don’t think Meshuggah would have wanted to see their influence driven in this direction, I just don’t think so.

In a nutshell, the awesome shit that Meshuggah and Textures started has mostly been disgraced, degraded, and dumbed-down for the masses instead of allowing the masses to get what was going on, or not.  I mean, let’s face it, at the end of the day most of these newer djent bands are just glorified metalcore with a polyrhythm here and there.  That’s a really disappointing development to ponder.

With all that said, I still LOVE the concept behind djent (or progressive groove metal), and when it’s done well, when it adheres to the roots and sticks to its guns (an increasingly rare occurrence), it’s still one of my favorite styles of metal out there.  On that note, I leave you with some REAL djent, some genuine progressive groove metal that gets my blood boiling and spurs me to go apeshit, while also making me think.