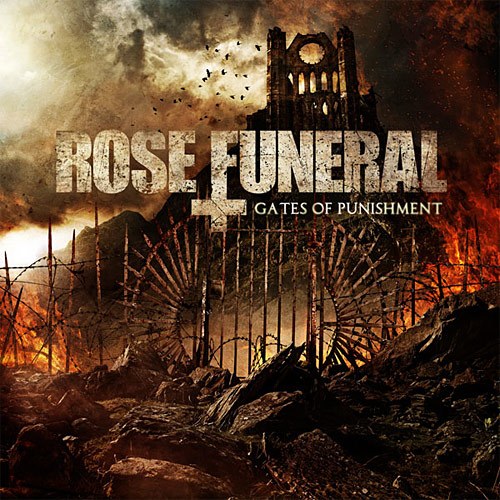 (Austin Slagle-Knauss turns in this guest post, reviewing the most recent album by Ohio’s Rose Funeral.)

“I’ve touched the hand of god and crushed in his fucking teeth…” That is my hands-down favorite lyric from any sort of satanic music. I wish there were another way to represent satanic music, because it seems anything that has the word “satanic” in it creates a terrible first impression on people. At first glance, you would think the metal community would react differently, and it does to a certain degree. But time and time again, I talk to people about satanic metal and they brush me off like it’s a joke. Trust me, it’s no joke and Rose Funeral proves why. 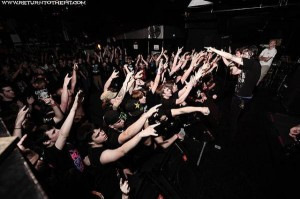 Rose Funeral is out of Cincinatti and have been creating stellar death metal since 2006. They released their demo Buried Beneath the Bloodshed that year and followed it with the EP Crucify.Kill.Rot. That’s when I first heard them. This is the EP that got them signed to Siege of Amida Records (my personal favorite European label), who chose to re-release it with new artwork. At the time this EP came out, I was still in high school and my musical tastes had not yet fully “developed”. Being young and dumb, I wrote them off as just another death metal band  and went on to listen to experimental grindcore or some other obnoxious shit that would piss off my teachers.

I didn’t cross paths with RF again until November of last year. I was on a CD-buying rampage and in the midst of that I got my hands on their second full length CD, The Resting Sonata. I got this at the same time as I acquired The Contortionist–Exoplanet, The Acacia Strain–Wormwood, The Tony Danza Tapdance Extravaganza–Danza 3, and DEP–Option Paralysis. The Resting Sonata got pushed to the end of the line for a few months.

One spectacularly stressful day I happened to put on The Resting Sonata. That is when the Rose-Funeral-sized hole in my heart grew. This album is full of a pure, punishing, raw sound that I rarely find in metal today. This album focuses on being “heavy”, with lots of chugging and breakdowns, which doesn’t bother me; in fact, I kind of prefer it, although there is a growing dislike of that style in the community. But even if you don’t like chugging and breakdowns, just listen to “Buried Beneath” and tell me if it doesn’t illicit some emotional response.

Enough of the old, now let’s talk about the new. The opening track on Gates of Punishment, “Legions of Ruination”, shows how I imagine an Illuminati meeting would start in the caves of a cliffside mansion before it proceeds to then punch you in the neck with tasty death metal goodness.

The band have really stepped up their performance with each new release. The guitar work in paticular has grown to soaring new heights. The solos in Gates of Punishment are bright and happy, while retaining the hard edge. Guitarist Jimmy Snook sounds like he genuinely had fun recording his guitar parts. It’s still satanic death metal, but it’s not as dark and doom-y as their previous efforts.

Now, I know alot of you are going to dismiss RF as simply another deathcore act, but I disagree. This is a death metal band that utilizes certain deathcore tools. I believe they have the power to lead a new American satanic death metal movement, and that would be amazing to see, as deathcore and djent are mainly at the front of the scene right now. Just listen to “Beyond the Entombed”.

A few more notes about the band:

In 2008, Rose Funeral switched labels and signed with Metal Blade. Their Facebook page is here. Also, as an interesting side note, vocalist/guitarist Ryan Gardner has a pop/punk side project by the name of Hello From the Stars.