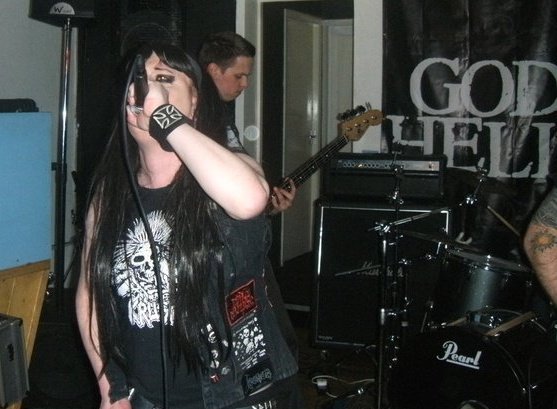 In this third part of our impromptu mini-series on female fronted metal bands we’ve recently discovered, the subject is Winds of Genocide. This band is based in Durham City, in the northeast of England and are fronted by a woman named Kat “Shevil” Gillham. Their debut effort is an EP released in 2010 called The Arrival of Apokalyptic Armageddon. I heard about them recently via a message from occasional NCS contributor “Willard Shrapnelspear”. He may not have been a patron of NCS for very long, but he has already figured out the kind of rank, disgusting musical assaults I often prefer in metal.

Just a few days ago, the reliable, Singapore-based Pulverised Records (home of bands such as Desultory, Interment, Impiety, Bastard Priest, and Morbus Chron) announced the signing of Winds of Genocide for the release of their debut album sometime in 2012. The music is described in a press release as “an offensive d-beat onslaught” and “a bastardized fusion of Cianide, Amebix, Unleashed and Bolt Thrower.” That all sounded pretty fuckin good to me.

The most recent song released by the band is a tune from an upcoming split with Abigail (Japan), and it’s called “Into the Darkness of Eternal Nuclear Winter”. The band describes it as “kinda like Unanimated, Naglfar, early Unleashed thrown into a blender with old school Svensk Käng/ Crust Punk”. Check it out on the Soundcloud player right after the jump. It’s also the first song streaming on the ReverbNation player that I’m also including after the jump. It includes songs from that 2010 EP, too. Check it out.

By the way, I might as well say it before it pops up in the Comments: Kat is a transgender woman (see this interview). I’m sure someone will say that gives her an edge in the nasty-growling department. I wouldn’t know.