(NCS reader and commenter Black Shuck provides this guest post as an introduction to two Midwest metal bands who are worth getting to know.)

In the bygone days of old (last year), when I was a foolish young college student in Galesburg, Illinois, full of hopes and dreams and enough coffee to kill a small child if that child were a pansy, I was introduced to the area’s local metal scene. Two bands who I became familiar with there have already been covered here at No Clean Singing: The Horde and A Hill to Die Upon. But there are two more local gems from the several-states-wide corn maze that is the Midwest who I feel people need to know about: Ashes of Avarice and Awaking Leviathan. So I have decided to take a break from trampling flowerbeds and relaxing with my favorite drink (bourbon mixed with several shots of bourbon) to enlighten you about them.

I’ve never been sure how to classify either of the bands. Ashes of Avarice remind me of Black Anvil in the sense that their music seems at its heart based in black metal, but is influenced by so many other things as to be a different genre entirely. It’s dark, yet it’s a heavy kind of dark, rather than an evil one. It makes you want to headbang and put your fist in the air, to rock the fuck out and have a good time, as opposed to, say, making you want to prance around in the forest and drink the blood of koalas, or whatever it is Satanic Tyrant Werewolf does these days.

The riffs tend toward thrash mixed with traditional heavy metal, yet they don’t really fit into either of these genres, nor are they black metal riffs. They’re inventive, they keep the music interesting without being experimental, they lend it atmosphere. The vocals stay mid-range for the most part (a notable exception being the slow, menacing “Our Hangman’s Sweet Embrace,” where they venture into death metal territory at points), yet still have just enough rawness and power to complement the heaviness of the music and lend it a rough edge.

Ashes of Avarice have posted three songs on Reverbnation, which you can find by going here (or listening below) All three are fantastic, but if you listen to nothing else, listen to “Chasing the Dream (Through the Mouth of a Dragon).” It opens with a wonderful blur of tremolo picking and blastbeating, and the riff starting at 1:16 will break your fucking neck.

I’ve been in contact with the vocalist, and according to him, they have six new songs that are even better than those three. I’m excited. Hopefully we’ll see a full-length from these guys at some point. 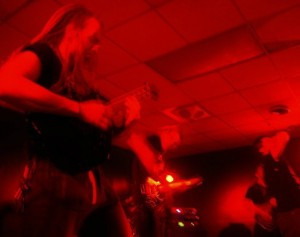 Like Ashes of Avarice, their music does not fit neatly into any one genre. However, it is much more melodic than AoA (although still containing a tinge of dark atmosphere), catchy as hell, and varied in approach, ranging from the straightforward, simple assaults of “Wind Beneath Our Skin” and “We Vanish in This Breath” to the quick, upbeat riffing of “Leviathan Speaks.” Plenty of tremolo picking here, enough to make me consider classifying them as melodic black metal.

You’re welcome to listen and decide for yourself, because they have an EP up on Bandcamp, and they’re giving it away for FREE. Yes, they’re giving you FREE MUSIC. Listen and download here. Visit them on Facebook here.

I hope you enjoy both these bands. The music players are just below. Good night, and good luck (with hiding the bodies, or whatever it is you guys do when you’re not reading NCS).

2 Responses to “ASHES OF AVARICE and AWAKING LEVIATHAN”