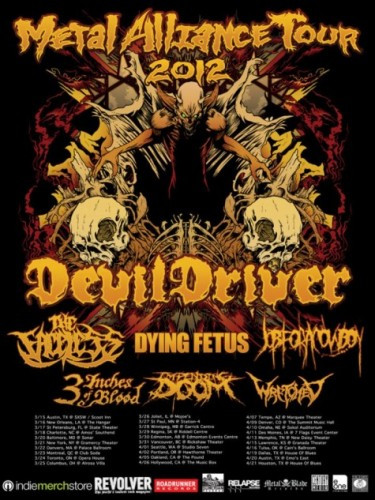 Yeah, it’s kinda late in the day for another post, but I just saw a press release about a new tour running from March 15 through April 21 of next year that I thought was worth talking about. This tour had been forecast previously, but now we have a concrete schedule. Here’s the line-up:

Why is this interesting? Well, first of all, it should be loaded with new music. The Faceless is currently putting the finishing touches on its third album for a tentative February release on Sumerian. Stands to reason that they’ll be performing songs from that album. I’ll be curious to hear it, because guitarist Michael Keene has described the CD as “the most musical and progressive record we’ve made” and says the songs will be more focused “on musicality and making an expressive, unique, moody and expansive record.”

On top of that, Dying Fetus is currently recording a new album. It’s not projected for release until the middle of next year on Relapse, but they will clearly be finished with the recording before hitting the road on this tour, and so we can expect new songs from them, too. And that’s not all.

Job For A Cowboy has also recently finished recording their next album for an early 2012 release on Metal Blade. So yes, we can expect to hear new songs from them, too. I thought the Gloom EP released this year was a step ahead for this band, and their next full-length is something I definitely want to hear.

And 3 Inches of Blood? They’re currently recording their next album as we speak.

What about Wretched? According to their facebook posts, they’ve been writing new songs and plan to play new music on their tours this winter, pointing toward a new album next year.

Impending Doom is also planning to release a new record in 2012, though whether the songwriting is sufficiently advanced for road-testing of new music I don’t know. Still, I’ve never been disappointed in one of their live shows.

Probably nothing new from DevilDriver, but I know from experience that they kick plenty of ass in a live performance — as do all of these bands. So even if there were no new music coming, this would still be a tour worth checking out. But getting new music from almost all of these bands in a live setting? Bonus!

Here are the dates and places:

23 Responses to “THIS NEW “METAL ALLIANCE TOUR” SHOULD BE INTERESTING, TO SAY THE LEAST”