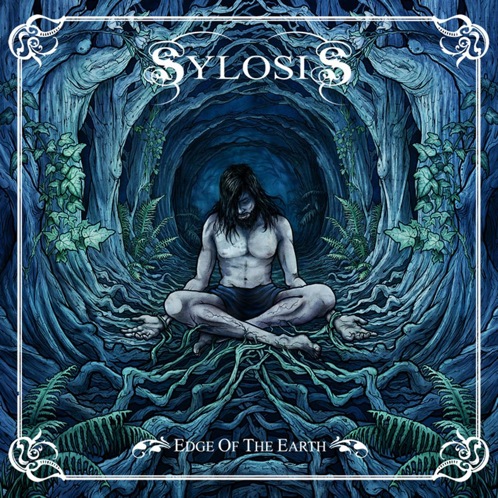 (NCS writer TheMadIsraeli is taking a different tack with his list of the year’s best albums — either reviewing or re-assessing each of them, one by one. Here’s the first.)

I have been truly dreading reviewing this album for the simple reason that I may fail to describe adequately what this album means to me in the modern metal landscape. I never got to review this album during my tenure at The Metal Register before we shut down, but I was supposed to.  I’m glad it didn’t go down that way now, because I’ve been able to sit on this album and really take it in.  It’s been in constant rotation all year, regardless of what else beckoned my listening habits.

I remember when self-anointed critics were unreasonably hammering these guys, after three EP’s and a debut full length, for being a Trivium knockoff, simply because they were busy taking Trivium’s thrash/metalcore hybrid sound to the next level.  Sylosis has come a very long way since then, along with numerous lineup changes, with only mastermind and guitarist (now also vocalist) Josh Middleton remaining.  The lineup established on Conclusion of an Age marked Sylosis finally establishing their identity, finally cementing what it was they wanted to do.  The Conclusion of an Age lineup is still here, minus vocalist Jamie Graham, in their triumphant, flawless victory known as Edge Of The Earth.

Sylosis are THE modern metal band, combining old-school thrash metal aesthetics, metalcore energy and dynamics, and powerful and majestic melodeath melodies.  THEY ARE the ultimate example of the future in metal that lies in the hybridization of sub-genres.  They manage to take the best of these three schools of thought while throwing out the superfluous, unneeded bullshit, and manage to form a cohesive sound that never fails to hit on target. 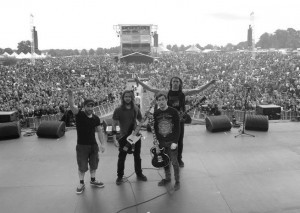 This album tells the story of a man who is condemned to eternal life in complete isolation and solitude.  The music needs to establish this from the onset, and indeed it does. “Procession” starts off the album with a clean intro, sober and somber in its character, conjuring the imagery of a barren landscape with only a violent wind tearing through it.  It isn’t too long, though, before a violent torrent of rage explodes, an assault of powerful melodic thrashing majesty to which no comparisons come to mind.

The music is fast, furious, powerful and all-consuming, and it’s at this point where I simply can’t imagine that listeners would not be absolutely hooked.  “Sands of Time” follows, and Sylosis has no qualms about leaving the listener with no breathing room.  A stately intro full of sorrow brings out one of the most powerful melodies written ALL FUCKING YEAR.  The song is classic Sylosis to the T, with powerful, razor-sharp riffs, impassioned vocal delivery courtesy of Josh Middleton, with his anguished roars and ravaging shrieks, and to-the-point rhythm provided by the drums and bass, giving the music its powerful forward momentum.  The solo is the first true, potent sign of the emotion conveyed through this album, providing an overwhelming gravitas that is all too rare in music these days.

Just when the wind has settled and died down, “Empyreal”, parts 1 and 2, split the earth in two beneath you — a galloping, mid-paced seismic wave of world-wrecking force.  This song also has one of the most memorable sweeping sections I’ve ever heard, used as the song’s central hook and theme.  “A Serpents Tongue” crashes at you with hurricane wind-speed, while “Awaken” follows with something more along the groove lines, a slow-mo shrapnel-dispersing grenade of designed to fragment psyches.  The groove, though, doesn’t prevent this song from busting out surgically precise riffs flavored with Middle Eastern spice, but rather gives the riffs propulsive weight. 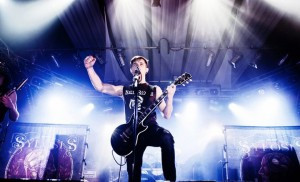 “Kingdom Of Solitude” is definitely one of my favorite songs on this album, with its verse charged with melodeath-y quickness, its captivatingly emotional mid-section, and its outro that dies out in a triumphant yet bittersweet tone.  This is one of the songs that most effectively channels the feeling of despair and hopelessness in eternal isolation in stanzas like “A lone wolf in this emptiness.  Defeated.  I’ve served this sentence far too many times “.

The song beautifully transitions into the album’s only instrumental, “Where The Sky Ends”,  a ballad of powerful melodies and contemplative ambience.  This serves as a nice intermission, preparing the listener for the last part of the album.  It assails you, though gracefully, with guitar acrobatics full of gorgeous, scorching melodic runs.  This is definitely the instrumental track of the year for me.

“Dystopia” features a deceptively calm, collected acoustic intro before bursting into a razor-sharp storm of icicles.  Listening to “Apparitions” is like being smitten with surging thunder, while “Altered States” assails the listener with a rain of fire.

“Beyond The Resurrected” is a slower, ethereally tinged number that nonetheless brings the killer riffs.  “Eclipsed” is one of my favorites, with an intro that channels old-school Sepultura, a kick-ass main riff, and an epic outro.  Closer “From the Edge of the Earth” is a depressingly plodding number, capturing the sorrow and resignation of the immortal man as he prepares himself for his time in solitude. 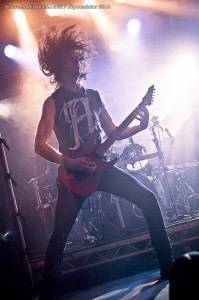 Not only is this album a testament to rare musical proficiency, it sounds bad fucking ass too.  The guitar and bass tone is razor-sharp, like an ice pick, the drums thunderous like sledgehammers smashing stone.  Everything is so clear yet so ballsy, and not a single detail is ever lost despite the intricate, extremely involved nature of Sylosis’s music.  Josh Middleton’s vocals are leaps and bounds over Jamie Graham’s, a hoarse lion’s roar that splits the sky and triggers oxen stampedes.

Edge Of The Earth is one of the many of my favorites of this year that encapsulates in all its glory what is great and profound about modern metal.  I still listen to it, still get totally enveloped in it, still never want it to end.  It’s perfect, and it’s even more astonishing because it achieves such perfection  despite its unusually ambitious length and hefty song count.  If you were to ask me?  Honestly, this is my album of the year.  My other choices won’t be categorized in order though.  It’d kill me to actually have to rank the rest of them.

You’ll notice by the way that the post title now says top 15, not top 10.  I couldn’t bring myself to eliminate even 5 of my choices for best of the year.