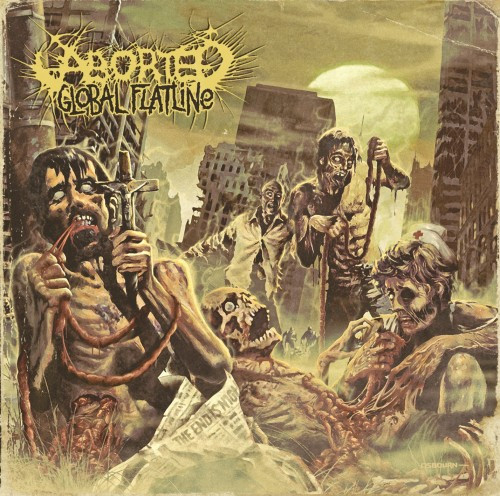 Instead of being institutionalized for long-term treatment, the psychopaths in Aborted are about to release their seventh full-length album, Global Flatline. This monstrosity will be vomited forth on the unprotected public by Century Media on January 24. Today, we’re as happy as zombies feasting on a putrid corpse to premiere the album’s third track, “The Origin of Disease”.

Over the course of their storied career, Aborted have churned out a grisly body of work that has stood the test of time and amassed a global following of fans who are now hungry for more. From what we’ve heard of the album so far, they won’t be disappointed.

“The Origin of Disease” is on the bleeding forward-edge of speed, propelled by a relentless drum barrage and scalpel-sharp riffing. It’s caustic and crushing, but it’s also loaded with powerful grooves and spiced up with infectious bursts of lead guitar and a solo near the end that spins out in unexpected directions. It features titanic bass lines, explosive bass drops, irresistible chugging, and dual vocals — Sven De Caluwé’s hair-raising shrieks and sink-hole gutturals courtesy of guest vocalist Julien Truchan (Benighted) — which carve quite viciously.

In short, it’s a fully loaded, jet-fueled, razor-sharp head-fucker of a song: a blast of modern death metal from a band who definitely aren’t just regurgitating the gory glories of the past, but who haven’t pulled up their roots from it either.

Without further ado, here’s “The Origin of Disease” (and in the near future you an expect an official video for this song):

Источник Болезни (The Origin Of Disease) by Century Media Records

As if we needed to provide further temptation for the album as a whole, here’s more:

Also, the album was recorded, mixed and mastered by the renowned Jacob Hansen (Volbeat, Pestilence, Hatesphere, many more) at his studios in Denmark. Though we hear he hasn’t been in his right mind since that experience ended, the music sounds great.

Finally, the entirely fitting album artwork has once again been handled by the disgusting Justin Osbourn from Slasher Design.

Here’s the track listing for the album. Aborted aficionados will notice that it includes three titles from the band’s 2010 EP, Coronary Reconstruction. However, those songs have been re-recorded for the album by the band’s current line-up of De Caluwé, Eran Segal (guitar), Michael Wilson (guitar), JB Van Der Wal (bass), and Ken Beden (drums).

In addition, the limited-edition digipack will include, as a special bonus track, a remastered version of “Nailed Through Her Cunt”, which originally appeared on Engineering the Dead (2001). There’s a possibility that this song won’t be featured on NPR.

Since we’re already geeking-the-fuck out over Aborted, we might as well just keep going. For example, there’s this (thanks to NCS reader Utmu for the tip on this merch): 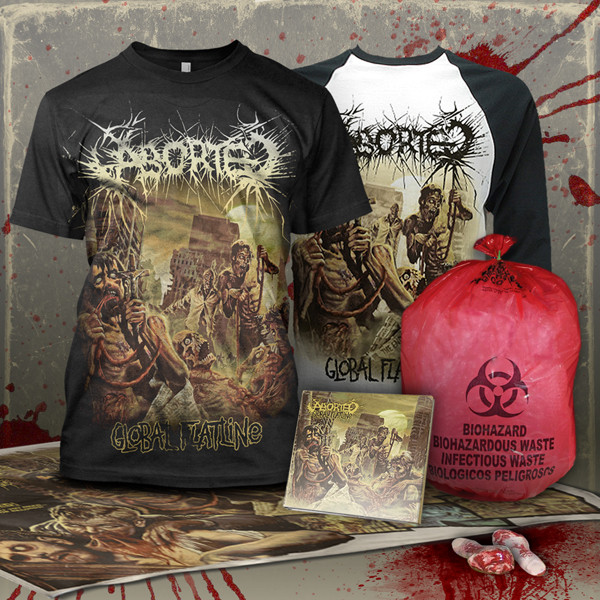 What this is: a picture of a special pre-order package available at this location, which includes the following must-have items:

We’re especially eager to see what body parts we get. We’re hoping for a left ass cheek, because our personal collection is still missing that item.

Also, guess what arrived in the mail at the NCS Compound yesterday? The February 2012 issue of DECIBEL magazine. That’s right — we get the magazine so far in advance that it hasn’t even been written yet. And that future version of the magazine’s “Call and Response” feature includes none other than Sven De Caluwé doing a blind tasting of songs from 7 new or forthcoming albums.

Okay, well, that’s probably enough geeking out about Aborted. Let’s wrap up this post with more eye- and ear-candy. First, in case you didn’t see it, here’s the official trailer for Global Flatline. It’s definitely NSFW, but who the fuck cares? You’re not safe for work either.

And finally, for the sake of completeness, here’s the first single from the album, which is being sold as a digital download on iTunes and Amazon mp3 right now. It’s the title track.

9 Responses to “AN EXCLUSIVE NCS PREMIERE: ABORTED’S “THE ORIGIN OF DISEASE””