The words are in Hungarian, but they’ve recently become available in English translations, and I found them interesting to read while listening to the album (for the umpteenth time). If there’s a concept I can discern, it is one about the unity of life and matter, about the connectedness of human beings to the Earth, and more than the Earth, to the star-spawned matter of which we and it are made. 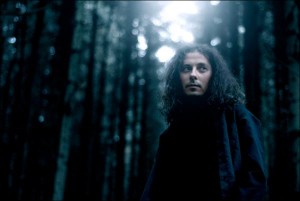 For example: That song “Fekete mezők” means “black fields”, and the lyrics speak of the “thud of wheels hurtling along”, of “pace, movement, dynamics in motion”, of the “flames of mechanic icons above us” and “meteors burning in red to the Earth”. The music is charged with a quasi-industrial rhythm — it hurtles along like a locomotive and blazes like a meteor, driven by an amazingly infectious series of riffs and a heavy, distortion-effected guitar tone that becomes a signature sound on Rengeteg.

Ethereal keyboards and a piercing, clean guitar solo complement the persistent rhythms and make you see in your mind’s eye what the lyrics are describing. The song includes not only harsh vocals but also — and it’s a sign of what’s to come — really impressive clean vocals in the chorus, provided by session vocalist Attila Bakos.

That opening song is followed by another in a similar musical and lyrical vein. “Kel keleti szél” (eastern wind rising) is an immediately infectious barrage of clattering drums and distorted riffing, with a synthesized melody flowing through and bounding above the powerful rhythmic charge — and the lilting clean vocals of Bakos are even more present. The song tells the story of “an eastern wind rising to bring” a traveler home, rolling on iron wheels through tunnels, across bridges, through industrial estates. Again, you feel in the music the story that the song is telling.

With those two musically similar songs standing as a kind of “introduction”, the album then moves into different terrain with “Trilobita”. Electronic beats pulse urgently, and the song starts with a bouncy riff and tinkling keys. It has a pop kind of infectiousness, almost like a dance, with those clean vocals helping to spin out a swirling folk melody.

Lyrically, it’s also a different path in the journey, at least as I interpret the words. People move across the Earth, but they also move through time, and matter moves through them. The trilobite heart beats beneath the ground and also in our bodies, as the atoms of physical existence turn and transform and move through the world and through us. 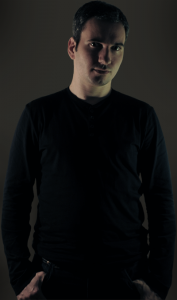 With the fourth song, “Kő kappan” (stone thumping), the mood dramatically changes again. The almost entirely instrumental song begins with a simple keyboard melody, sounding almost like a calliope, both playful and wistful. As the song progresses, however, strings and a pounding drum join in, and the music swells in almost orchestral grandeur. Brief vocals sing about blue clouds soaring above, a stone thumping, and woodland droning. It’s a beautifully imagined, beautifully realized piece of music (even if it’s not metal).

“Kő koppan” proves to be an interlude, or perhaps a prelude to “Vashgyek” (iron mountains), the album’s 14-minute centerpiece, in which Thy Catafalque’s alter ego  Tamás Kátai draws together all the musical strands on display in the album. The ingredients include those distinctive, heavy, grinding guitars and pounding percussion; acoustic folk-style melodies; shimmering keyboards; echoing guitar leads and pulsing bass lines; a varied mix of harrowing, harsh, distorted vocals and clean singing (including a memorable guest appearance by Agnes Tóth from the neo-folk band The Moon and the Nightspirit). It closes with all hell breaking loose in a firestorm of badass riffage.

Immediately after the strong finish of “Vashgyek”, “Holdkomp” (lunar module)  switches gears again. It’s entirely instrumental and the most avant-garde track on the album — sampled mechanical noise and sounds of roaring, pulsing, droning electronica; a ratcheting synthesizer beat and a tinkling melody; industrial propulsiveness with a prominent bass line; that distinctive distorted guitar tone — it’s all there.

“Kék ingem lobogó” (my blue shirt waving) virtually reprises the melody from the opening track — and thus it’s also catchy as fuck — but with more electronica in the mix. A bass line weaves a web, the heavy guitar makes you want to jump up and down, the exotic folk-inflected vocals still like nothing you’ve heard before (unless perhaps you’re Hungarian), the lyrics telling of a blue shirt cut from the blue dawn and the dew on blue forests, and this:

“Look at me, my good mother sun, look at me,
Run through my roots, my veins,
Pour my heart to the brim with light,
Let it beat with the black soil.”

And then in the next song the rain falls: “Az eső, az eső, az eső” (the rain, the rain, the rain). And it is the sound of rain, slow, melancholy, beautiful. “I leave during the autumn, fog follows me slowly / The runway rolls through hazy fields . . . And it is raining on and on / Tumbling down on my heart . . . And I shall be the mist in a city long gone / The time roaming on streets deceased.”

Two songs left, and the next one — “Tar gallyak végül” (bare twigs eventually) — is also largely instrumental, but the music is full of power, the drums clattering and pounding, the heavy guitar sound falling like granite and a different guitar tone flowing like molten lead, the synthesizer again carrying the melody, and it ends with the sound of wind or rain and what I imagine is the sound of crows calling to their kind. And these words:

“A bell on the forest,
A song of poplars,
I know, the arm shall become mud
Or bare twigs eventually.
Into the depths leans everything,
Into the sun greylags are flying,
And wind rattling in the body at night.”

How can this album finish? I was curious as hell to find out, as I came to the final track. What mood would it convey? Would we be carried further into sublime philosophies? Or would we return to the wildness of nature? Well, the last song came out of nowhere, nothing like the conclusion I expected. It warmed my black fucking heart.

“Minden test fű” is the most truly black-metal song on the album. From the beginning, it’s a howling onslaught of pounding percussion and roaring, eviscerating waves of distorted guitar — scything, blistering, galvanizing. Brief, clean spoken vocals are almost overwhelmed by the cacophony — and then the song becomes something different, something more, with the wonderful vocals of Attila Bakos slowly crying that “all flesh is grass flying away in the wind”, while the instrumentation behind him whips like a fury.

And at the end, the lead guitar breaks into a folk-inspired dance, the drum hits a rock beat, and suddenly the music stops. In retrospect, it’s a perfect ending. Nothing has been predictable up to now, so why start at the end?

I’m not going to say this is my album of the year for 2011, because I’m so fucking mercurial that no doubt I’ll wake up tomorrow and think of another that would be a competitor, but as I write this now, I’m thinking it has no equal.

Which song to play for you? Well, my favorite song will be showing up in another post later today, one that has something to do with infectiousness. The one I’ll play now probably won’t come as a surprise. As much as I appreciate the songs on the album that are strikingly different from my usual fare, I still am who I am, and I think I know my NCS people, too. So turn this thing up loud and prepare to be knocked down. Just remember, it changes, and changes again.

Rengeteg was released by Season of Mist internationally on November 11, 2011, but its official U.S. release is . . . today!  Thy Catafalque can be found on Facebook via this link and the band’s official site is at this location.

Tamás Kátai is Thy Catafalque. He wrote the lyrics and the music, performed all the instruments (except the cello), did the drum programming, and delivered the harsh vocals. He deserves congratulations on an amazing accomplishment.

The English translation of the lyrics on Rengeteg can be found on the web here. But because the lyrics are so good and are so important to grasping the album as a whole, I put them in a document that can be downloaded by right-clicking on this link and saving the file:

Oh, one more note and then I’ll stop: I just learned that the marvelous Attila Bakos has his own one-man project called Taranis, with a debut album available at Bandcamp called Kingdom. I’ll be checking that out.

20 Responses to “THY CATAFALQUE: “RENGETEG””