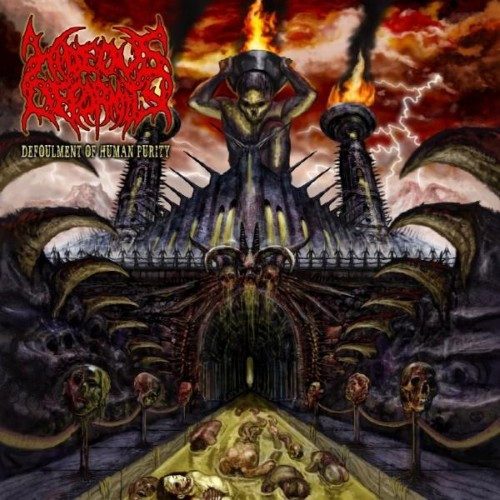 (NCS contributor The Baby Killer returns to our site with a review of the 2010 Sevared Records release by Norway’s Hideous Deformity.)

When people think of metal from Norway, more often than not they automatically think of black metal. After all, corpse paint and arson do seem to be the country’s biggest exports. But as hard as it might be for some to wrap their heads around it, there is also at least one really talented tech death band from the frozen wastelands, and they go by the name of Hideous Deformity.

They may not have reinvented the wheel with their full-length Defoulment of Human Purity, but what they did do was find a good balance of technicality and accessibility. The riffs and songwriting in general are very fast-paced and spastic, but not to the point of self-indulgent wankery a la Brain Drill or early Origin. No sleight against them or bands like them, I love that shit as much as the next guy, but there is a point where it gets just plain exhausting. Instead, HD’s songs fall into that tech death grey area where they’re way too tech to be considered groovy, but are undeniably intriguing and catchy at the same time. Think Visceral Bleeding or Cabinet-era Spawn of Possession and you’ll have a pretty good idea of what you’re dealing with.

As you may have gathered by now, the musicianship is top-notch, easily on par with any other relevant tech death band, and with a session lineup including Darren Cesca (Arsis, Goratory, Vile, etc.) and Erlend Caspersen (Blood Red Throne, Spawn of Possession), how could it not? These two make their presence known right off the bat, too, since the first two tracks, “Awaiting Decomposition” and “Deviant Manifestation”, begin with a drum solo from Cesca and a bass solo from Caspersen respectively. Guitarist Robin Larsen and vocalist Jorgen Nilssen (quite possibly the single most Norwegian-sounding name I’ve ever heard) round out the lineup, and thus the riff machine that is Hideous Deformity is born.

Like I said, this band isn’t really doing anything you haven’t heard before, they’re just really good at it. Defoulment is a solid album (if slightly sterile and overproduced, especially the drums), and hopefully we’ll see more from this very promising, highly underrated band in the near future.

Here’s a representative track from the album:

One Response to “HIDEOUS DEFORMITY: “DEFOULMENT OF HUMAN PURITY””