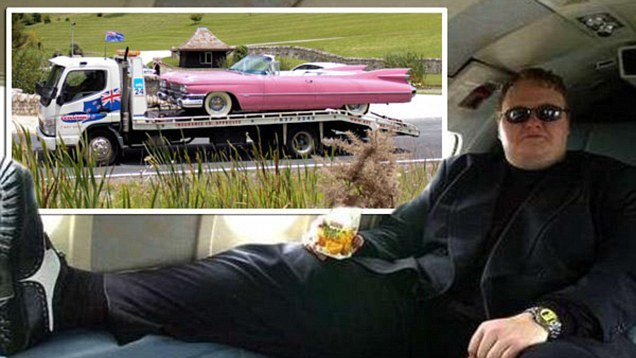 Kim Dotcom and his pink cadillac.

Lots of people I know, including some of the people who write for NCS, are up in arms over the U.S. government’s shutdown of the Megaupload file-sharing site earlier this week. It’s being condemned by lots of metalheads as a clampdown on the freedom of the internet, a violation of free speech, a virulent form of censorship, and a sign of worse things to come. I’m sure part of the reason why the reaction has been so intense is because of simultaneous efforts by fuckheads in Congress to pass those SOPA and PIPA bills we wrote about a few days ago.

But is the shutdown really some kind of tyrannical trampling on freedom of speech? Nah, I don’t think so. But before we get to opinions, let’s start with some facts. I could be wrong, but it seems like it’s better to develop opinions after you have some facts instead of just taking someone else’s word for it. At the end of this post, I’ll give you the sources of the facts as I understand them, along with a copy of the government’s indictment of Megaupload so you can see exactly the basis of this prosecution.

Does this have anything to do with SOPA and PIPA?  Hard to know, but unlikely. What’s clear is that the laws Megaupload has been charged with violating have been on the books a long time.  The RICO law was enacted in 1970. The criminal copyright law has been around for eons; the most relevant amendment was the No Electronic Theft Act, which was passed in 1997.  That amendment allows prosecution even when commercial profit isn’t a motive, though given what’s alleged in the indictment, it doesn’t seem like the government will be relying much on that amendment.

Why did the government pick on Megaupload? The indictment alleges that for more than five years, Megaupload has unlawfully reproduced and distributed copyrighted works for profit, including not only music, but also movies, television programs, electronic books, and business and entertainment software. The indictment also alleges that the sole owner of Megaupload has earned more than $175 million in illegal profits from operation of the site.

The key to this case is the government’s charge that Megaupload did more than simply store pirated files for its users — the claim is that it knew about the piracy, profited from it, and even encouraged it.

The indictment states that the conspirators actively promoted uploading of popular copyrighted works and discouraged the vast majority of its users from using Megaupload for long-term or personal storage by automatically deleting content that was not regularly downloaded. The government also claims that the conspirators offered a rewards program that would provide users with financial incentives to upload popular content and drive web traffic to the site, often through user-generated websites known as linking sites. The indictment alleges that the conspirators paid users whom they specifically knew uploaded infringing content and publicized their links to users throughout the world.

The indictment also contends that although Megaupload claimed it had a policy against copyright infringement, it failed to terminate accounts of users with known copyright infringement, selectively complied with their obligations to remove copyrighted materials from their servers, and deliberately misrepresented to copyright owners that they had removed infringing content.

For example, when notified by a rights holder that a file contained infringing content, the indictment alleges that the defendants would disable only a single link to the file, deliberately and deceptively leaving the infringing content in place to make it seamlessly available to millions of users to access through any one of the many duplicate links available for that file.

The government claims that Megaupload has cost owners of copyrights more than $500 million.

Doesn’t the law protect sites like Megaupload against prosecution based on the acts of its users?  A federal law called the Digital Millennium Copyright Act does protect sites that host third-party content if they remove infringing content when requested by copyright holders. That law is a critical element in the operations of sites like YouTube, Wikipedia, and many others, since millions of their users may be violating copyright at any given time. The government claims that Megaupload intentionally failed to comply with the DMCA.

Who owns Megaupload? The sole owner is a man named Kim Schmitz, with dual German and Finnish citizenship, who goes by the name of “Kim Dotcom” and has residences in New Zealand and Hong Kong. According to the indictment, he personally earned $42 million in profits from the operations of Megaupload in 2010 alone.

Are the government’s allegations true? Fuck if I know. Here’s what I do know ( or at least I’m pretty sure about this): First, the U.S. Department of Justice has a lot of discretion about what cases to bring and what cases not to prosecute. In general, they don’t seek indictments — especially in cases as high-profile as this one — unless they’re pretty fucking sure they’ve got the evidence they need to win. Furthermore, the fact that they persuaded a federal judge to authorize an immediate shut-down of the site pending trial means they’ve got evidence backing up what they claim. You can see some of it in the indictment, including internal e-mails among Megauploads managers.

Second, the owner of Megaupload has got the money to pay some high-priced lawyers to defend him and his company, which means that if there’s a trial, it will probably be a level playing field — and if the government can’t prove its case, the defendants will probably escape conviction. The outcome will be in the hands of a Virginia jury, not in the hands of government bureaucrats.

Okay, those are the facts, plus a few educated guesses. Now for some opinions.

1.  This case isn’t about freedom of speech or censorship.  It’s about two other things.  The first thing is the protection of intellectual property through the U.S copyright laws.  The theory behind those laws is that creators of artistic works will have a greater incentive to create if they own what they create and are protected in their ability to sell it. Those laws extend not only to music and books (the creation of which which may not require a huge outlay of money), but also to movies, television programs, and computer software.

If you think all creative works, including music, should be free of charge, then your real problem is with the copyright laws, not the shutdown of Megaupload.

Second, this criminal case isn’t based on the theory that even innocent web site operators should be held liable for failing to prevent the use of their site by other people who are infringing someone else’s copyrights. The government’s indictment alleges that Megaupload actively encouraged and facilitated copyright infringement, actually paid people for uploading infringing works, and profited from it handsomely.

That may not be true.  Ultimately, the government may not be able to prove its case. But let’s at least be clear about what the government is claiming. At no time in this country’s history has freedom of speech been interpreted to protect the ability of one person to take someone else’s copyrighted creation and give it away without the creator’s permission. The same Constitution that includes the First Amendment’s protection of freedom of speech also empowers Congress “To promote the Progress of Science and useful Arts, by securing for limited Times to Authors and Inventors the exclusive Right to their respective Writings and Discoveries.” (Article I, Section 8, Clause 8.)

2.  The Justice Department brought this case for political reasons — to appease the financially powerful companies in the music, film, and software publishing industries in an election year for the Obama Administration — and I’m not talking about the likes of Metal Blade, Century Media, Nuclear Blast, or the multitude of smaller metal labels and DIY metal bands who might benefit if this case is successful. But regardless of how politically motivated this case may be, it wouldn’t have gotten to first base if we didn’t live in a country that had legislated copyright protection for about 200 years.

3.  If this case is successful, we will likely see a severe short-term restriction on our ability to download albums for free — because other file-hosting companies will be taking more aggressive steps to prevent the uploading and downloading of copyrighted content. In fact, they’re probably taking steps to do that right now. If you define right and wrong based on your own convenience, then that will be a bad thing. If you put yourself in the position of creators of music, for example, then maybe what’s right and wrong won’t seem so black and white.

4.  Focusing just on music, this is merely the latest skirmish in a war between the recording industry and consumers of music that has been going on since the first incarnation of Napster in 1999. Even if Megaupload is shut down permanently, even if other file-hosting services clamp down more severely on unauthorized downloading, you know and I know (even if the Recording Industry Association of America doesn’t) that some other vehicle for digital file-sharing will take their places. So my advice is not to shed too many tears over the fate of Megaupload.

Finally, in case you get the wrong idea about where I’m coming from, I have downloaded music without authorization and without paying for it. Usually, I do that only when I can’t find a legal way of getting the music. But not always. Sometimes I just can’t wait. Also, in the earlier days of this site, I put up links for song downloads without permission from the artists or the labels.

So, I’m not trying to be holier than thou, and I’m not trying to lecture anyone about what to do and not do. I just think this Megaupload butt-hurt furor has less to do with freedom of speech than it does with short-term impairment of our ability to get something for nothing.

Now, please feel free to tell me in the Comments what a douchebag I am.

Oh yeah, here are the sources I used in writing this thing:

Copy of the Government’s Indictment

45 Responses to “THE MEGAUPLOAD SHUT-DOWN: FACT AND FICTION”