“Byzantine is one of the most original, most kick-ass, most awesome metal bands in the last 10 years and SHAME ON YOU IF YOU DON’T KNOW WHO THEY ARE.  No one else has yet reproduced their combination of Bay Area thrash metal, death metal, Meshuggah math-metal stylings, jazz fusion, and the grooves and melodic nature of the post-thrash movement and made it all work so seamlessly and so well.”

That’s how NCS writer TheMadIsraeli began his retrospective on Byzantine’s discography at this site last August, a look-back that included downloads of the band’s three albums (with permission). In that same post, we reported that Byzantine had re-formed (minus Tony Rohrbough) and was working on new music.

“We’ve all kept in contact through the past few years and have worked on each other’s projects as well. With our guitarist Tony moving back to WV from NC, we decided it would be a perfect opportunity to hang out again and jam. Before we knew it, we were tossing around riffs and song ideas and realized we had what seemed to be the foundation for a pretty kick ass Byzantine album.”

This is a band who were ahead of their time, and the time is certainly right for their reappearance. But they’re looking for help from fans. 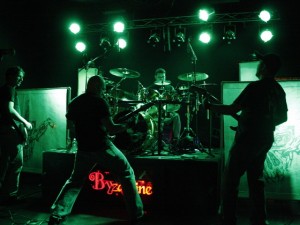 Byzantine has no label contract at the moment, and they’ve decided to self-finance the recording of the fourth album, and to raise funds needed for the production through Kickstarter.com. Through that site, fans can donate money in any amount to help with the work. Donations are set up on a tier program, and donated amounts within each tier will entitle contributors to receive different packages, including signed CD’s, back-stage passes, official sheet music, early digital downloads, and more.

For most of us, of course, money doesn’t grow on trees, but this is a worthy cause. And besides, it’s not really charity. What a donation really amounts to is a pre-order of music and merch — a pre-order commitment that precedes even the recording of the music. I’ve contributed money to three bands through Kickstarter so far, and Byzantine will be the fourth. It’s the kind of selfish behavior that also makes you feel like you’re doing good — win win!

Now, as tangible evidence of why this matters, here’s a song from Byzantine’s last album, Oblivion Beckons:

We’ll keep you posted on what’s happening with the project, and of course you can track developments yourself via Byzantine’s Facebook page.