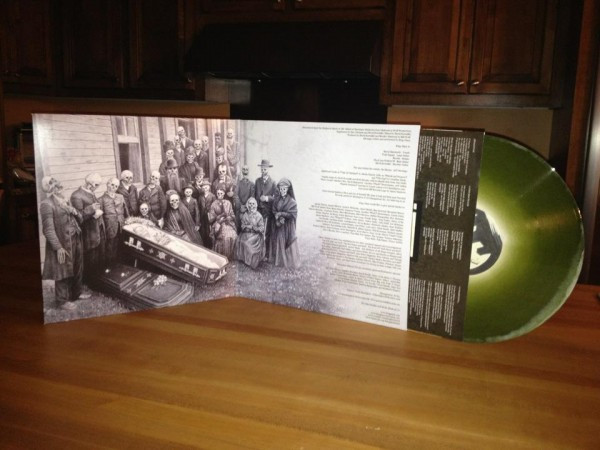 On January 18 we announced a contest to help celebrate the release of Dismal Hollow, the fantastic new album by Virginia’s King Giant (glowingly reviewed at NCS here). Drawing on the sense of violent historical conflict that underpins the first track released from the album — “Appomattox” — we came up with this question for our readers (actually, BadWolf came up with it): Tell us what famous battle in history deserves a metal song immortalizing it and why?

We got quite an impressive list of submissions, most of which you can read in the Comments to this post. We turned all of them over to King Giant and asked them to pick the winner, and they’ve now done that. Here’s the message we received from King Giant’s David Kowalski:

“This was really tough to pick just one winner because the majority of the responses were really good!!  But here it is: #5 – Ørsaeth – The Battle of Cameron.”

Ørsaeth will receive his choice of a CD of Dismal Hollow signed by the band or a signed copy of the colored vinyl LP of the album, plus one of the band’s shirts. After the jump, you can check out Ørsaeth’s winning entry. And if you haven’t yet picked up your own copy of Dismal Hollow, do that shit without delay. The CD is being sold by all the usual retailers, and it’s also available for download at Amazon mp3. We’re not the only people to praise this release — it’s racking up a slew of great reviews, including an 8 out of 10 in the March 2012 issue of Decibel.

The Battle of Cameron

The French Foreign Legion was a military unit put together by France made out of mercenaries, foreigners and general scumbags. For some reason, Emperor Napoleon III sent the Legion to Mexico. 3 officers and 62 enlisted men (yes, a total of 65 men) stopped at Palo Verde for a rest after marching 15 miles. Unfortunately for them, there just happened to be 2000 Mexican troops nearby. The Legion withdrew to the nearby town of Cameron, while holding off multiple cavalry charges, and took cover in a little inn in the center of town. The Mexican commander, being a man who could count, knew the Legion was outnumbered by far, and told them to surrender. Danjou, the Legion’s Captaine responded with “We have munitions. We will not surrender.” The Legion begin to fortify their position and the Mexicans attacked.

The legionnaires, by this point, hadn’t had any food or water for over 24 hours, and they were exhausted from marching. There were only 60 of them against 2000 Mexicans. They stood their ground, using everything they could. Things looked grim, men were dying, the inn had caught fire, but Danjou shouted “The Legion dies — it does not surrender!”

A sniper round caught Danjou in the chest and killed him, but the remaining legionnaires fought even harder! After 11 hours of battle, only 5 exhausted Legion men remained with no ammunition left. Did they surrender? No. They fixed bayonetes to their guns and charged, like true badasses, right at the Mexicans! Three were killed and the other two wounded. The Mexican commander approached the two wounded men and demanded their surrender. The men looked the Mexican commander right in the eye and demanded immediate safe passage home, along with their wounded, their fallen captain, their weapons, and their regimental flag. The Mexican commander said “What can I do with such men? No, these are not men, they are devils.” He granted their request and the Legion withdrew from the field.

60 Legion men against 2000 Mexicans. Nearly all the legionnaires were killed, but they took nearly 600 Mexican soldiers with them. A monument was erected at the spot of the battle, and to this very day, the Mexican army presents arms as a sign of respect whenever they march past it.

Bravery in the face of death and insurmountable odds, and never surrendering no matter how bad it may seem.

3 Responses to “THE NCS – KING GIANT CONTEST: WE HAVE A WINNER”