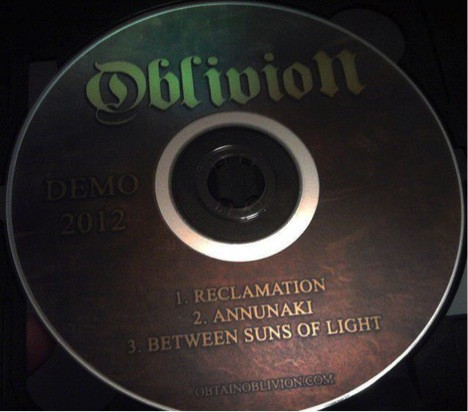 (TheMadIsraeli gave us a tip about the demo from this Bay Area band not long ago — and now here’s his more detailed review.)

Oblivion already has my pre-emptive vote of one of the best death metal albums of 2012 when their debut The Reclamation drops this spring.  This three-song, self-titled demo is a 10-minute, titanic-sized carcass-crusher of eon-spanning human corruption and carnage condensed into audio, and I’m loving the ever-loving shit out of it.

From the moment that the opener “Reclamation” begins, the music drags your body into the depths of a wasteland that looks like the cover of Suffocation’s Pierced From Within.  It’s an acid storm of carefully planned knife-strikes in the form of technical riffing brought forward from the glory days of the mid 90’s, when tech death was cool as shit and hard as fuck to play, but still musically sound.  When it comes to death metal, this is the kind of music I live for.

“The Annunaki” starts with a foreboding intro before beginning the attack with a high-speed tremolo pick assault  — the drills go into the left side, the right side, and down into the top of your skull at once and leave the head a flesh crater sphere.  This song has the sickest breakdown I’ve heard in a death metal song in a while; kind of sounds like being pulled into the river Styx by fallen angels as your flesh peels off and your soul is ripped away from you.

“Between Suns Of Light” is an intense last song, a brutal, catchy main riff with the recognizable, Oblivion style-riffing and an intense bridge with what sounds like dying souls in the flames of Hades.  It’s insane that this is only a 3-song demo, and yet I can already perceive an identity in this band’s approach that stands.  I think I would know them anywhere.

The performances on the demo are inhumanly tight, concise,  and bestial.  The vocals of Nick Vasallo are extremely sound, blood-gurgling gutturals and soul-rending shrieks accompanied by his flawless bass playing, full of sweeps and matching pace with the technical wizardry of guitarists Joe Ellis and Ted O’Neill, all accompanied by the M16 assault of John Haag’s drumming that never relents for one second.  The music is void of dynamics in the name of absolute brutality and relentless speed, exactly what I look for in death metal.

I leave you a YouTube clip of the song “Reclamation” plus several studio videos.  If you dig it?  You can go to Oblivion’s Facebook here and purchase this demo for $4 physical.  There are only 300 copies being sold though, so get on that shit.  Otherwise you can download the demo over on Itunes and Amazon mp3.

The reclamation is coming.  Are you ready for it?