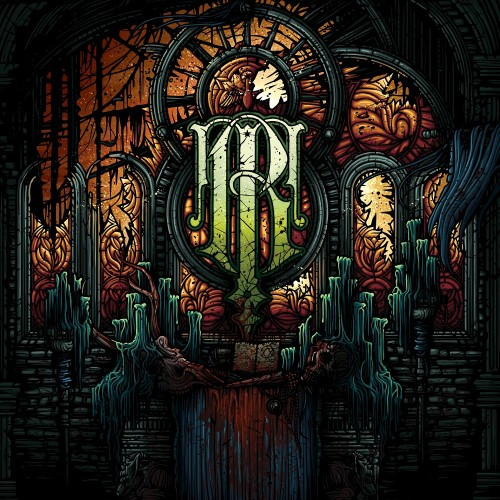 (TheMadIsraeli reviews the new album from Orange County’s Bleeding Through, which is out now on Rise Records.)

Anyone who was around when the metalcore explosion was happening and followed its development should know who Bleeding Through are.  Their revolutionary (and unmatched to this day) combination of hardcore brawn, black metal venom, thrash metal fanaticism, and death metal brutality — all with symphonic overlays courtesy of the only female keyboardist in metal worth a living fuck — has yet to get old for me.

I remember when people were pronouncing Bleeding Through’s demise when founding guitarist Scott Danough left the band after The Truth and thought they would start sucking, but Bleeding Through has been proving everyone wrong ever since, writing their best material on their last two albums, Declaration (2008) and Bleeding Through (2010), which showed that Scott apparently didn’t have much to do with the song-writing process at all.  So what’s the verdict on this band’s new album The Great Fire?

This is their most brutal yet most experimental effort yet.

This is a much faster, much more visceral and frantic Bleeding Through than we’ve ever heard before.  At the same time, this is also the oddest Bleeding Through, mainly due to Marta Peterson’s new-found sense of adventurism in the keyboard and symphonic department.  Adding instruments and sounds that were begging to be incorporated into Bleeding Through’s music — organs, harpsichords, fucking electronic-as-all-get-out pad sounds that are lo-fi as shit — she has helped create a much more blackened atmosphere than has been heard before.

On another odd note though, her more blackened inclusions are counterpointed by the rest of the band, who focus on a much more death metal bent.  It’s an interesting contrast that in this case works where perhaps it shouldn’t.

This is a relatively short album even by the band’s standards — 14 songs that clock in at just barely 39 minutes.  Bleeding Through has decided to emphasize their hardcore roots in their composition; most of the songs are one- to two-minute blitzkrieg-caliber assaults full of transitions and twists and turns.  The relative brevity of most songs makes the longer ones stand out though. “Final Hours”, for example, is fucking vicious.  When the main riff of the song comes back, after a small symphonic bridge, it makes me want to kill things.

Thankfully for all kvrmvdgeons in the audience, this album really goes light in the clean singing department, much as the self-titled album did.  It’s refreshing to see a band who, instead of “progressing and expanding”, has decided to stop fucking around and, for the most part, inflict a full-on rage explosion.

I’m not sure that much else really needs to be said.  Bleeding Through is a kick-ass band, always has been.  The album is great, but at the same time it’s essentially Bleeding Through doing what Bleeding Through does — you are either one of the people who digs that or one who doesn’t.  I’m in the former camp: This band deserves support for soldiering on as excellently as they do.  I’ll post a few songs, but the whole album is actually streaming up on the Rise Records YouTube channel.

3 Responses to “BLEEDING THROUGH: “THE GREAT FIRE””