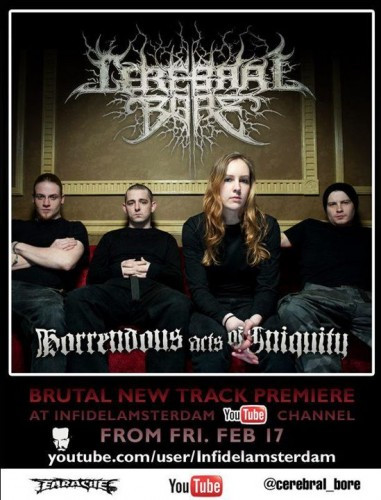 I’m not claiming that we were the first metal blog to climb up on the Cerebral Bore bandwagon before it was a bandwagon, but we were pretty fucking early. Thanks to a hot tip from our buddy Phro, we published a lengthy feature about them back in November 2010, when certain people were still doubting whether Som Pluijmers really recorded the vocals on the band’s Maniacal Miscreation album.

In that first post about the band (the first of many), we included a video from another early Cerebral Bore adopter — Amsterdam’s THE INFIDEL (Ed Veter) — as proof that Som really did record the vocals. All those early suspicions have of course fully evaporated by now, and Som has become known far and wide, helping to rocket Cerebral Bore to international popularity (at least in certain carnivorous circles).

THE INFIDEL remains an ardent supporter, and today he was given the privilege of debuting a brand new Cerebral Bore song — “Horrendous Acts of Iniquity”. It went up on the Tube of You about a half hour ago, and it will be available for download from iTunes beginning on Monday. Check it out after the jump. Oh, the grindy slamming blistering blowtorch death metal brutality! Oh, the gurgling gutturality of the Som! Get some!

(Thanks to NCS reader Utmu for tipping me that this song debut was coming and how to find it.)

Cerebral Bore are currently touring the U.S. with Goatwhore, Hate Eternal, and Fallujah. Get the schedule in this NCS post.