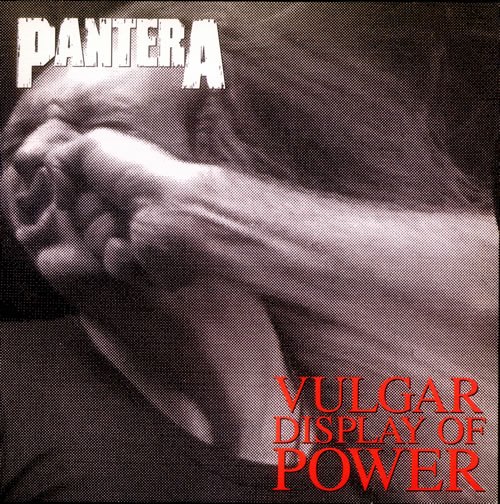 Thanks to an article at FULL METAL ATTORNEY, I discovered that today is the 20th anniversary of Pantera’s Vulgar Display of Power. I agree that it’s an anniversary worth remembering, and not because it reminds me how fucking ancient I am.

Speaking of which, yes, I was alive and a partially functioning adult when Vulgar Display of Power was released. However, I was not then a metalhead. In fact, although I tolerated a bit of Pantera more than the vast majority of what I thought of as heavy metal back in 1992, I wasn’t a fan. I was still listening to punk and getting into grunge with Nirvana, Pearl Jam, and Soundgarden, and I brushed off Pantera as knuckle-dragging, simple-minded, cock-swinging mediocrity. There, I said it.

As the years have passed, and I’ve become more knuckle-dragging, simple-minded, and cock-swinging, I’ve come to appreciate Pantera more, though I’m still not a Dime worshipper or a Pantera addict. As for Vulgar Display of Power, it does seem to represent what was best and worst in Pantera’s music, though I’m not sure that makes much sense.

The Full Metal Attorney makes some provocative assertions about the album that I thought might generate some discussion here at NCS. He recognizes that almost as many metalheads despise the album as love it — perceiving it as something that was responsible for “ushering in nu metal, and the bad groove metal of the late 90’s” and blaming it for “the tough-guy posturing of metalcore bands like Hatebreed or hard rock bands like Drowning Pool.” He then goes on to respond to the criticism, arguing that it’s one of the most influential metal albums of all time; that it was one of the heaviest albums released up to that point; that it was an adrenaline rush loaded with dynamism and great songwriting; and that it made its mark in part because it’s not what people expected.

So I’m wondering what you folks think about the album and about Full Metal Attorney’s discussion of it — which is worth reading in full here. Comments about Pantera in general would also be welcome, especially from people who (unlike me)  were really affected by the band’s music (either positively or negatively) when it was current.