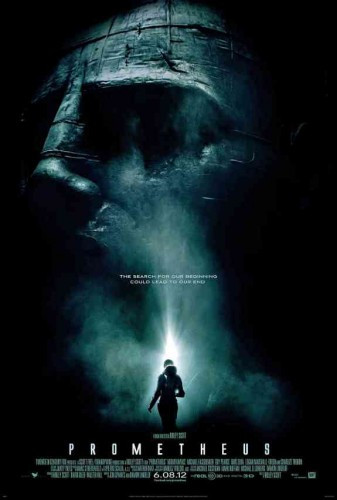 Until today I didn’t know much about the forthcoming movie Prometheus. A lot of info has become available, but I wasn’t paying attention to it. I knew what I needed to know — that it was a sci-fi film and that Ridley Scott directed it. A sci-fi film made by the director of Alien and Blade Runner, and his first return to the sci-fi genre that launched his career in almost 30 years? Fuck yes, that’s a movie I was going to see, regardless of plot, actors, reviews.

Today I saw the first official trailer for Prometheus, thanks to a tip from Quigs. My reaction — the first two words that came to mind? “Holy shit.” It’s visually stunning, and the bits of story line that emerge are intriguing, to say the least. The trailer is also intense, and there’s a lot of screaming at the end. There was a lot of screaming when I saw Alien for the first time, too, most of it coming from me.

Having been sucked in this far, I decided to read more about the movie. It stars Noomi Rapace, (who was great in the Swedish original of The Girl With the Dragon Tattoo), Michael Fassbender (who was great as Magneto in X-Men: First Class), Guy Pearce (who was great in Memento, L.A. Confidential, and everything else he’s done), Idris Elba (from The Wire), and Charlize Theron (who has been great in everything of hers I’ve seen, especially Monster and In the Valley of Elah).

So, lots of great actors. The plot also sounds interesting. Although originally conceived as a prequel to Alien, it has evolved into something more, though still set in the same universe as Alien. 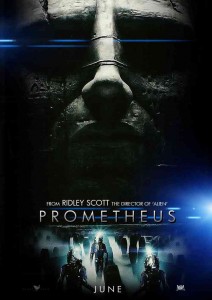 Here’s a synopsis from The Font of All Human Knowledge: “In the late 21st Century, humankind has discovered hieroglyphs common to each world — including Earth — suggesting a common origin to life in the universe. The crew of the spaceship Prometheus is sent on an expedition as part of a mission to uncover these origins, but soon discover a malevolent entity that threatens humanity’s very existence.”

And here’s another synopsis that accompanies the new trailer on YouTube: “In the distant future, two superpowers control Earth and fight each other for all the solar system’s natural resources. When one side dispatches a team to a distant planet to terraform it for human colonization, the team discovers an indigenous race of bio-mechanoid killers.”

The movie will be released on June 8, and a 3D version will be shown on IMAX screens. Sign me the fuck up!