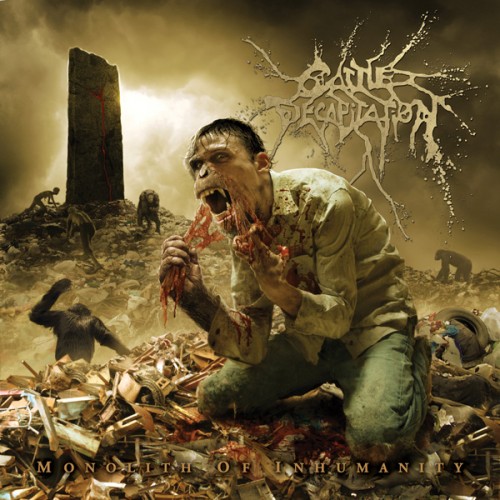 Three years have passed since Cattle Decapitation released The Harvest Floor. Yesterday, a landslide of information about Cattle Decap’s next album — Monolith of Inhumanity — hit the band’s SMN News Official Message Board. Where to start?

Well, how about that album cover by Wes Benscoter. It connects to a concept unveiled in the album’s lyrics, or so we’re told. Presumably, more information about the concept will be coming, but for now there is this snippet of lyrics I saw on a recent Facebook status: “Through the rise of technology / We lost our humanity / Trashheap lobotomy / Self-imposed sodomy”

I think my favorite title is “A Living, Breathing Piece of Defecating Meat”. Coincidentally, that’s also the first song from the album to become available for streaming — and of course you can hear it after the jump. But first, a word about guest appearances.

Guest appearances on the album include:

-Guest vocals by Mike Majewski of Devourment on “Projectile Ovulation”.

-Gang choir vocals on “The Carbon Stampede” by The Cephalic Carnage Community Men’s Choir (consisting of all current members and ex-members Jawsh Mullen and Zac Joe).

Oh, but there’s more. Pop culture artist Tom Bunk, creator of the infamous Garbage Pail Kids trading cards, which depicted adorable children disemboweling, skinning, devouring, soiling, roasting, impaling, and most importantly urinating on themselves, created individual pieces of art for each member of the band. Those will be sold as part of a pre-order bundle at Cattle Decap’s official store; a couple of the bundles are pictured here: 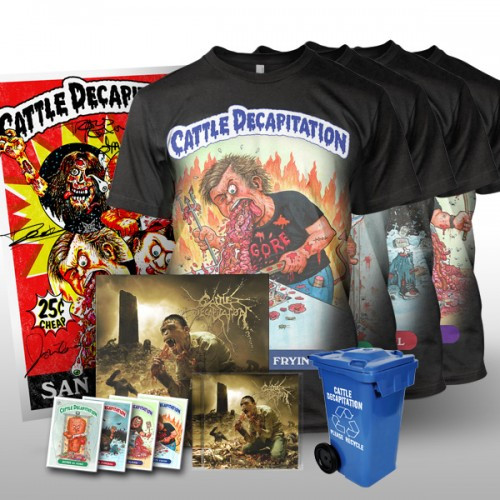 Metal Blade has also established a landing page here, where the album can be pre-ordered now. It will be released on May 8 in the U.S. and on May 4 in Europe and the UK.

Okay, enough with the merchandizing pitch. Let’s get to the music.

The new song, as mentioned, is called “A Living, Breathing Piece of Defecating Meat”. It’s metal marauding at a merciless pace, with blazing riffs, pile-driving rhythms, three or four different vocal styles (all of which sound both disgusting and enraged), and drumming that makes the cliched comparison to a machine gun seem pitifully inadequate. The music wants to knock out your teeth with a brick and then kick you in the nuts for mumbling. Put in your mouth guard and listen up: