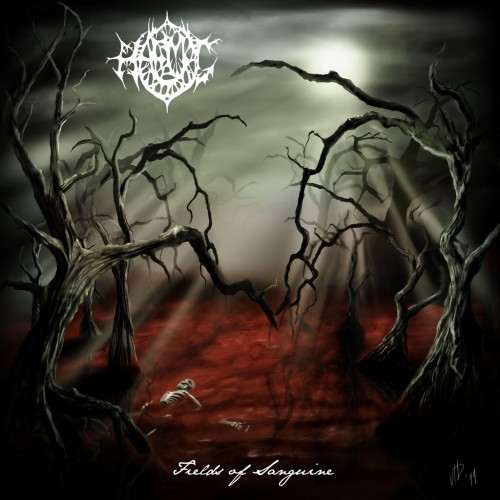 After the jump, you can stream the entire album and get links to the .zip and .rar downloads. We’ll also give you an address to use if you’d like to order a CD of the album. 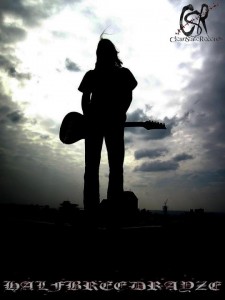 Fields of Sanguine is a substantial batch of music. It includes re-recorded versions of the three songs that appeared on Haemic’s 2011 demo plus seven new songs. The download also includes instrumental versions of five of the songs from the album proper plus a demo of another song that Ray recorded previously for a different project.

Attempting to classify the music is a task fraught with difficulty, because it’s a fusion of styles. Some of the songs have the ring of bombastic, bounding, symphonic black metal. Other songs blast and chug like a cross-breeding of technically oriented death metal and classical music (Fleshgod Apocalypse will come to mind). In other songs (e.g., “A Machine of Self Aware”), Ray breaks out into progressive and even experimental guitar flourishes or swirling leads that light up an intricately featured musical landscape.

We already knew that Ray is a very talented guitarist, but Fields of Sanguine proves that Adam Farkas is a keyboardist and a composer to watch, capable of integrating a variety of non-metal influences into a richly varied tapestry of heavy music.

Mitch Shinderman’s harsh vocals scour like a frigid wind in most songs and are responsible for a good bit of the black metal aura that shrouds the album, but he’s a decent clean vocalist, though the clean vocals appear infrequently.

In a nutshell, this is a fascinating, densely layered metal romp that will especially appeal to fans of symphonic metal with a hard edge. Here’s the album stream:

To download the .zip file of Fields of Sanguine from our high-speed Fileburst server, right-click on the following link and save the file to your device:

To get the .rar download from Mediafire, go HERE.

And finally, Ray expects to receive physical CD’s of the album later this month. To order a copy, contact Ray at this address. He plans to mail them out at his own expense.

Here are links for Haemic and Ray:

5 Responses to “AN NCS DOWNLOAD: HAEMIC’S “FIELDS OF SANGUINE””