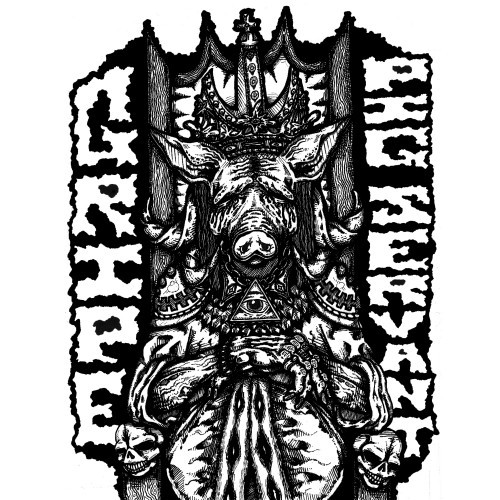 (Trolling bandcamp this morning, I found the excellent Georgia grindcore band Gripe.  They seems awful pissed about pigs or something…)

I hate every fucking morning, but there’s just something about Sunday morning that really just…makes me wanna fuck a possessed nun with a Molotov cocktail. And this morning is no different. I wake up and wipe the sleepies from my eyes, get out of bed, and trip over the head of a pig.

Face full of pig guts.  Seriously, I mean, by now I’m really not surprised by the horrific shit I find in my apartment, but this… Ug.  And it’s still warm, too.  Eww…I think there’s some shit mixed in with the blood. Goddamnit.

I stand up and, covered in pig blood and little squishy flecks of pig shit, kick the head.

“Stupid fucking dead pig.  I don’t even want to know where you came from.”

There’s a bottle of Four Roses, still half full.  Oh, good.  That’ll help me get through the day.  I wander over to the computer.  We need some fucking music to help me clean this shit up before the girl comes home from her business trip. 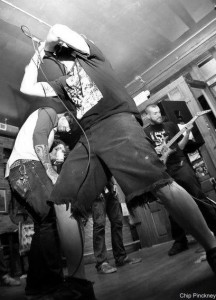 After a few pulls from the bottle, I click over to bandcamp to find some band called…Gripe?  I have lots of gripes, particularly in relation to the pig carcass in my bedroom.  Let’s give it a go.

The opening track has a movie clip.  I think I recognize it, but I can’t place it.  Then, the music starts.  The vocalist is a rabid dog fighting a wild boar to the death for the remains of an emaciated rabbit carcass.  The drums are the sound of a zombie ostrich kicking you to death to protect its little ostrich zombie babies who are definitely gonna feast on your brains once you’re dead.  The guitar and bass are the sharpened claws of a half starved tiger ripping the face off of an elephant.

Nodding my head to the music, I take another drink of the whiskey.  Oh, it feels so good.  Like a warm shower.

Something bites my leg.  Hard.  Like a pissed off pig corpse trying to get revenge for being murdered with a machete.  Which, it turns out, was exactly what was biting my leg.

The music keeps ripping as I jump onto the computer desk.  Ha-ha! I laugh at the furious pig corpse rolling around and chomping at random.  It lacks the sinew and skeletal structure to…

Like a demon possessed by the spirit of a coked out William Wallace, the pig corpse rises into the air and jumps at me. I dive off the desk, and it bounces off the wall.  The blood splatter on the wall is like a nice Jackson Pollack.

As the music surges through the air, permeating everything with throat-fucking hate, the pig corpse wiggles across the floor at me.  It’s fast, but I am faster as I run into the kitchen.  Spray-on cooking oil…where is the goddamn spray-on cooking oil!?!

Just as I find the spray can and the oven lighter, the pig corpse slams into me and I fall to the ground like a rag doll.  The music fills the house, and the pig chomps at my face along with the tumultuous rhythm of the song.  I punch it in the forehead.  For a split second, both of us freeze.  I freeze because I’m trying to hold back tears of pain and it freezes because, I think…it’s giggling.

I throw a leg up, which just gets stuck in the remains of its rib cage.  The pig bites the tip of my nose off.  I scream and yank its ear to the side.  The pig rolls onto the floor and I scramble for the spray can and lighter.  The pig charges again, just as I get the lighter to spark the spray.

The album ends as abruptly as it began, and the pig, engulfed in flames, finally loses its fight.

Thinking quickly, I kick the door open and throw the blazing pig carcass off the balcony and to the street below.  It explodes into five sizable pieces when it impacts.

I sigh.  The girl is not gonna be happy about the fire damage…we’re definitely gonna have to move again…