EDITOR’S NOTE: In September 2011, Andy Synn reviewed Brutalitarian Regime, the most recent album from Norway’s Blood Red Throne and ultimately named it to his list of 2011’s greatest albums, summing it up in these words: “This is a brilliant and unflinchingly brutal record, start to finish, standing as a testament to the seemingly boundless talents and uncompromising nature of the Norwegian death metal war-machine.”

Andy recently had the chance to interview the whole band in the flesh during one of the UK stops in their European tour with Suffocation, and he delivered the interview in two formats for you, because we know some like to read and some like to watch: Above is a video of Andy’s interview, and then a transcript of it is after the jump. 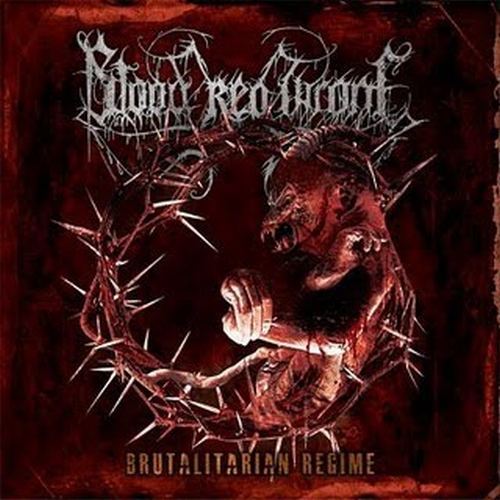 Andy: So how’s the tour been, so far I mean?

Yngve: Yeah, a lot of cool people on the road. London yesterday and then we have another two shows in England. We have one more in Munich, then Switzerland then…

Død: Suffocation just did Russia, then we joined up with them after that for Europe.

Andy: How well do you know the other guys in the other bands?

Yngve: Everybody on the bus has been like, the coolest people, especially when Suffocation came on, they came straight on with a big smile and brought, you know… not the tension, but…

Yngve: Yeah, the feeling of the bus just got even better.

Andy: How was London, and the UK been for you so far? How was it getting into the UK – I’ve known some bands who’ve come over before and had customs be a bit…

Død: London’s always good. We’ve played there before, so…

Andy: What’s after this tour?

Død: We’re actually going to do a live dvd back home in Norway.

Død: So we’re going to do the DVD, then it’s Hellfest in June.

Andy: What you should do is, ‘cos Axel wouldn’t recognise you, you guys should start going as his backing band. He’s got no idea who’s in his band anyway, so you guys should just come on behind him. (All laugh)

Yngve: We also want some English/UK festivals to book us to play… so call us, we want to get back here! Bloodstock is the best fucking thing and we want to be there!

Andy: Last year you were in America a couple of times… how was that? I always like to get a feel from European bands about touring America.

Død: No, it was amazing. The first time we went it was like, six weeks with Dimmu Borgir, and it was just crazy. We played these big venues and it was so crowded, so that was one of our highlights. Then we went back last year with Grave which was also fucking crazy. A bit smaller but a lot of good, a lot of great, crowds.

Ivan: Smaller venues but a lot of drinking. That’s how we like it.

Andy: Nah, there’s a couple of American beers that, if you find them are just… nice.

Andy: Or anything on draught!

Andy: You say… while drinking beer? (All laugh)

Ivan: This is Heineken though!

Yngve: And this is free!

Død: We asked for Tequila for tonight.

Andy: Anyway, who have been your favourite bands to tour with?

Død: Well these guys haven’t been touring with the band for as long as me, but I have to say that Suffocation have been really great. They’re one of my favourite bands and they’re so cool.

Død: Of course the Dimmu Borgir guys, I know those guys, but they play, they’re a big band, so I don’t get to see them that often.

Yngve: With Suffocation it’s just been like… “one of the guys”, you know? No fucking attitude, no rockstars, just they’re metal and they drink, they’re like us!

Ivan: Oh shit, man I’ve been in the band like two years now and it’s a dream come true. I’ve got five great musicians here, everybody’s on the fucking line you know, and I ain’t got anything to complain about!

Andy: How did all you guys come to join Blood Red Throne, bit by bit? Since 2010 you’ve redone the entire line-up, and you’ve all joined at different times. How did you all meet?

Ivan: Well we got Yngve right here, we picked him up through human trafficking!

Yngve: Ha, well I played some gigs with Daniel in my old band, with his other band years ago. I played some gigs with Ivan’s other band a couple of years ago. We stayed in touch and then one day he posted on heavymetal.no in Norway that they needed a new singer for Blood Red Throne and I wrote in and I got the gig in December. Ole got in almost the same way, just less competition for him, you know? Emil, how did you join?

Død: I actually did.  I searched through the videos.

Emil: One day I thought to myself, “What the fuck am I going to do today man? I’m fucking bored… wait, I know this song ‘Ripsaw Resentment’ by Blood Red Throne!”. I recorded it with my cam at home, put in on youtube and a few months later got this email from Daniel. [Note: this video can still be seen on youtube and is pretty badass]

Andy: Did you believe it was him?

Emil: No! At first I was just like… this is not real.

Død: But there was no doubt in my mind that this was the right guy. He’s got the fucking skills and he came in and there were just no problems, so it’s perfect.

Andy: I’ve been a fan for a while and you know, watching people leave I was getting a bit worried, but you kept posting “We’ve found THIS person, sorted”, it was simple and there was no messing about.

Yngve: He [Død] booked this tour before we even got into the band!

Død: Hell yeah, I was fucking doing this tour anyway. With Suffocation? Yes. I will FIND people, don’t you worry.

Andy: So no pressure at all there…

Andy: Talking about the new album, why the change in the logo? Why go back to the spikier, nastier death metal logo?

Død: Because the label asked for it.

Død: It was actually a condition for us signing. They’re into old school stuff and older bands with those sorts of logos.

Andy: Well yours is still one of the more readable logos. It’s good and I like the nastiness of it, but you can at least still read it!

Død: It’s cool to be back on the old logo I think.

Yngve: Isn’t that the original logo?

Død: That’s the original one, yeah.

Yngve: So it’s more back to basics.

Andy: So how would you describe the sound of the new album? I’ve argued with my friends, about whether it’s more old school 90’s death metal, or a more precise, new-school sound…

Død: Well it’s partly the 90s stuff of course, but we want to hang out in modern times, so of course there’s a combination.

Yngve: And also for the live show, we try to bring in more of the “show” to the death metal…

Ivan: And the aggression you know? It’s all about aggression, drinking and balls out!

Yngve: We’re not about death, we’re about METAL, you know?! Bringing the fucking attitude.

Andy: So, what were the core influences on the new record?

Død: Just good music, good bands. Basically just listening to records and being inspired by that.

Andy: Do you guys go back and listen to the old stuff much?

Yngve: Of course since I’m new and had to learn all the songs I’ve been listening to more Blood Red Throne than anybody in the world in the last couple of months!

Andy: Well it is death metal, you can probably get away with faking a couple of lines if you want?

Yngve: You could EASILY fake it all, but I don’t want to. I want to do it right. Since October, since he posted the message about the new vocalist, I’ve been listening to Blood Red Throne every day at work, 8 hours every fucking day since October. I felt I needed to, not only to learn the songs, but also to make it a part of me. And also so that when I’m on stage doing another vocalist’s stuff, I don’t want to perform anybody else’s songs. By now, for me, they’re MY songs. In my head at least.

Ivan: Right, that’s how it’s supposed to be you know.

Andy: Well what do you guys do outside the band?

Død: We’re not rock stars yet!

Yngve: I have a half-and-half job. Half the year I’m a carpenter, half the year I work stage work for bands on tour. Like this one here, Judas Priest. I worked with them two times last year. And that’s what I think is cool, to be in a band doing band stuff, and also being part of building up the bands and working for them.

Andy: So you can keep working in metal even when you’re not doing metal.

Yngve: Yes, and also so you can still keep the fan’s perspective. Because there are no metal bands who aren’t fans, you know? We’re all here because of all the bands we love.

Yngve: Who were we just with… Cannibal Corpse! They’re going on tour in the UK now with Triptykon, Job For A Cowboy and Enslaved and they were like, “fuck, we’re going on the same bus as Tom G!” and I just loved seeing that, ‘cos for me Cannibal Corpse are gods and they’re just as stoked at being around Tom G.

Andy: You never really get over meeting your heroes.

Yngve: Even Maiden have gods. It’s important to keep that fan’s perspective, that’s what keeps the inspiration.

Andy: Who decided on the Pestilence cover on the album?

Død: That was me, definitely.

Andy: What did you think of the last two Pestilence albums, which I guess might be a controversial question…?

Død: I’m a fan of Pestilence, so I like it, I do, I have to say. But of course, I like the old stuff more. I think it’s cool, they have their own style, their own sound.

Andy: Any bands you guys would particularly recommend? I think it’s always nice to let you guys give a shout out to particular bands, you know?

Andy:  Thanks, I think it’s always nice to have recommendations from guys like you. We should probably call it, there, but any parting words, anything you want to say to the tens of people who will likely see this video?

Yngve: Join us next time!