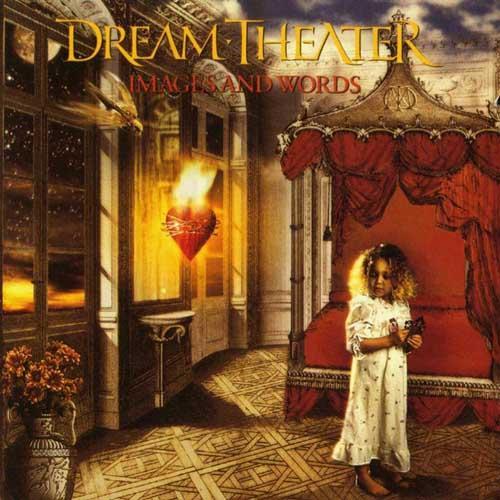 Our fellow metal blogger, Full Metal Attorney, has been keeping his eye on the calendar, and he noticed that yesterday — March 28 — was the 20th anniversary of the release of Images and Words, the second full-length album by Dream Theater and a kind of milestone creation in the genre of prog rock/metal. To commemorate the occasion, he wrote a retrospective about the album. To commemorate his commemoration, I’ve written this post, because I’m curious.

This isn’t the first time I’ve leached off of Full Metal Attorney. I did this once before after he posted a piece about Pantera’s Vulgar Display of Power on the 20th anniversary of that album’s release. And, y’know, one good turn deserves another, particularly when the turn means I don’t have to come up with my own ideas.

FMA’s post begins with these words: “[Dream Theater’s] fan base is composed less of metalheads and more of music students and guitar nerds. There’s no mystery why that’s the case: The band’s musicians–who met at Berklee College of Music–are consistently named to be among some of the best in rock music. So music geeks love them. But Metalheads, as a rule, hate them.”

FMA accurately sums up my feelings about Dream Theater, which are based on the sample listening I did years ago before I decided that continued listening might turn my brain to porridge. In his words:

-style prog metal with glam metal. They drop the shtick of glam, but sadly they don’t manage to avoid the cheese factor.”

“James LaBrie’s vocals. If you heard this guy at a karaoke contest, you would think, ‘Damn, he’s pretty good.’ Heard in the context of a record, it’s a different story. His clean vocal delivery unsuccessfully reaches for the highs, and lacks any kind of soul.”

“The keyboard parts have not aged well. ‘Surrounded’ has the worst of the synth problems, but they pop up in a lot of other places as well.”

“The second half of the record sums up the remainder of the highs and lows of Dream Theater’s music. Like much prog, it devolves into wankery, with long, meandering songs . . .” 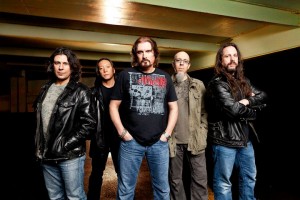 On the other hand, FMA finds some redeeming qualities in the music on Images and Words (and in the music of Dream Theater more generally): They have the capability of delivering “awesome riffs, showy solos, and huge hooks that beg you to sing along.” And he rates the Train of Thought album as one that every metalhead should own.

Now I am definitely the wrong person to be grading this band or attempting to find their strengths, because I come to a full stop so fast when I listen to their music that I’ve never given them serious consideration, despite being aware that John Petrucci is widely considered to be a guitar god and that the other instrumental performers are also highly regarded. In my case, it pretty much just comes down to the vocals.

I actually tried listening to a few songs just last week before I knew about the anniversary of Images and Words, because a different band’s music made me think of them, and I wanted to see if my recollection was correct. As it happened, I still have two Dream Theater albums on my iPod (don’t ask me why) — Train of Thought (2003) and Octavarium (2005) — and I made it through one song on the latter and had to stop.

So, here’s what I’m curious about: Do most metalheads really hate Dream Theater? Does anyone who reads NCS really enjoy Dream Theater’s music? And if so, why? And am I just being a narrow-minded prick for not recognizing the music’s strengths because I can’t get past the vocals? And if you know Train of Thought, do you agree that it’s an album every metalhead should own (and yes, it appears I do own it)?  Comments please?

(And by all means, don’t make do with my summarizing of Full Metal Attorney’s post — read it for yourselves here.)