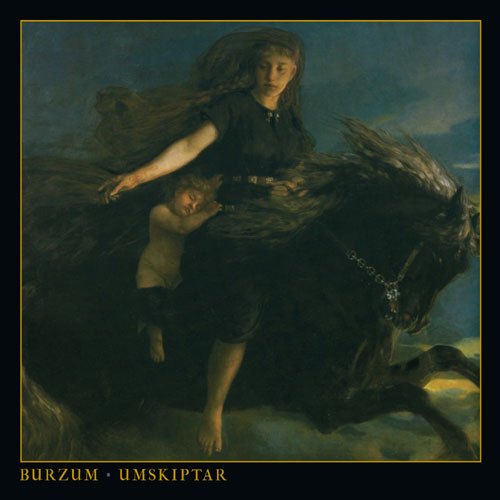 Seems like it was only last year that Varg Vikernes released the most recent Burzum album, Fallen, possibly because Fallen was released only last year. Nevertheless, Varg is already preparing to release another Burzum album this May, with the name of Umskiptar, which means “metamorphoses”. According to Varg, the album’s concept is “a deeply rooted European (i.e. Pagan) Stoic concept of changes. This concept was chosen in a world heading for a new Ice Age, and can therefore also be seen as critique of all the popular political movements of our age of lies.”

The lyrics (in Norwegian) are all drawn from a Norse poem called “Völuspá”. Varg explains that Umskiptar is “a return-to-the-roots album for me, with a strong focus on atmosphere and wholeness rather than anything else.” He also says that the vocals on the album “are more important than on any other Burzum album, and more varied too – and as honest as it gets.”

You don’t have to take Varg’s word for it — and of course no one in their right mind would take Varg’s word for much of anything — because at some point in the last 48 hours someone also uploaded the entire new album to YouTube. As far as Burzum music is concerned, this  was pretty much an ideal situation for me, because it allows me to hear the music (a) without paying for it (because I really don’t want to give Varg any of my money), and (b) without stealing it (because I don’t even want to steal from Varg).

Also, I would like to applaud Varg for making it even easier not to take much of anything he says seriously by posting a batch photos to his web site and Facebook page yesterday, most of which I thought were just embarrassing. Specifically, he published 13 promo photos of himself as the “Hunter”, decked out in camouflage, wearing a helmet vaguely reminiscent of WWII-era German army headgear, and armed with . . . a crossbow. He also posted a different series of photos depicting himself as “WargaR”, garbed in chain mail and a Viking helmet but not really looking all that menacing.

These photos are unintentionally funny, because as far as I can tell Varg has no sense of humor. However, some of the FB comments on his photos make up for what he lacks. I especially liked this one that accompanied the following photo: “please varg, stop killing…..don’t kill that tree. please.” 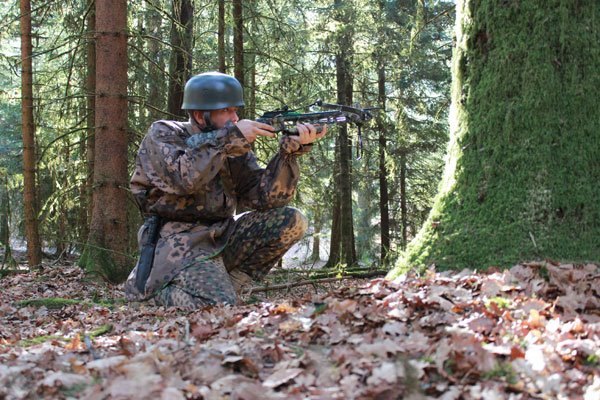 Here’s one of the “Warrior” photos: 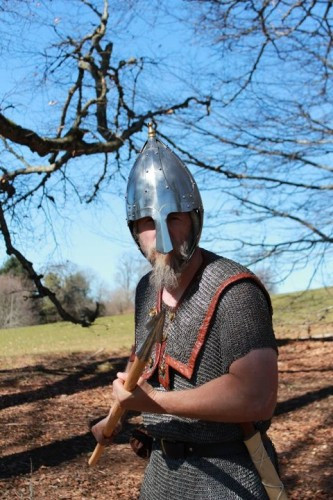 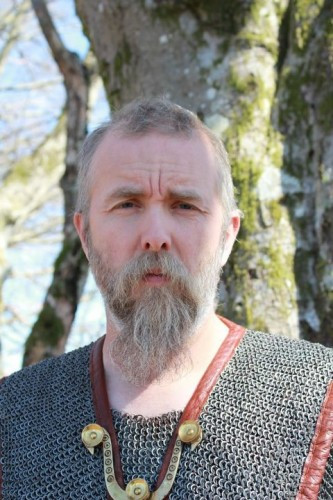 I do think the music should be considered on its own merits, separate from these photos and from the ugliness in some of Varg’s writings and utterances over the years.

Much as I’ve enjoyed a lot of Burzum’s music, Umskiptar is a letdown, at least on a first listen. There are moments that are engrossing, and even beautiful, but on the whole the album is deeply eccentric and dull. It’s like what you might have heard in a pagan coffeehouse, if Norse pagans had spent their time listening to spoken-word performance art in coffee houses instead of putting their neighbors to the sword and crossing the oceans in longboats.

The vocals are indeed varied, ranging from dramatic basso profundo intonations of the Norwegian poetic lyrics, to not-very-good clean singing, to the sharp edge of black metal rasping (I wish there had been more of the latter). I suppose it’s also true that the music is atmospheric, in the sense that it usually proceeds at a plodding pace and rarely quickens the pulse. As mentioned, there are moments when a spark of fire comes through the murk or a melodic passage captures the imagination, but those moments are infrequent. Too often, it simply sounds self-indulgent and pretentious.

These are first impressions based on one listen, and perhaps further listens would create a different impression, but at this point I’m not sure I care enough to put forth the effort. But of course you can make up your own mind. In this next YouTube clip, someone has helpfully created a montage of excerpts from each song, and I think the excerpts are well-chosen to give a quick sense of the album as a whole. After that, I’ve included a complete song — “Aera (Honour)” — which is the one I liked best on Umskiptar. If you want to listen to all the music,  you will have to wait until May.

UPDATE: You will notice in the following Comments a message from Marie Cachet asking me to remove the photos that appear in this post. Ms. Cachet is the photographer who took the Burzum promo photos for Umskiptar. I e-mailed her, and she agreed to give permission for my use of the photos in this post if I added the copyright information and links that you now see below the photos.

Ms. Cachet, who apparently is acting on Burzum’s behalf, also asked that I remove the YouTube clips that were embedded with the original version of this post.  I had thought these YouTube clips were uploaded with Varg’s approval because the administrator of the Burzum Facebook page posted the links on that page. I guess I don’t know for sure that this is really an official Burzum FB page.  In any event, whoever originally uploaded the album and the excerpt montage to YouTube have now taken down the music.

FURTHER UPDATE:  A full-album stream of Umskiptar appeared again on YouTube after the last update, and it has now been there for more than 9 months at this writing, apparently without a request to YouTube that t be removed. So, I’m including it again. And one of the reasons I’m adding it here, more than 9 months after I wrote the original post, is because the album has grown on me since I first heard it. I’ve come to appreciate it for what it is rather than what I wanted it to be.