(In this post, TheMadIsraeli reviews the new album by Australia’s Elysian.)

Melodic Death Metal is a style that had a mighty sad fall from grace when the metalcore explosion took off.  The metalcore bands milked the melodic aspects of MDM dry while the melodic death metal bands themselves were often left behind by metalheads who simply considered the style to have become old hat.  The problem was exacerbated by the horrific selling out by big names such as In Flames (we won’t go there) or Soilwork as well as just the stagnation of certain legends such as Dark Tranquility and Arch Enemy.  Luckily, the style was kept alive and legitimate by long-staying underdogs like Darkane or Before The Dawn.

However, significant changes in approach seem to have revitalized melodeath.  We all know and love the mighty Insomnium, with their melancholy, sorrowful melodic taste and the mood of doom metal in their sound.  It’s what has set them apart from the pack, that is until lately.  In the last 6-7 years, there has been a rather unexpected surge of mid-paced or slow-paced melodic death metal by bands who use the vocals, energy, and dual guitar antics of melodeath but mix with those elements the macabre, melancholy, and anguished melodies and tempos of doom metal, and Funeral Doom in particular.  I’m thinking of bands such as Daylight Dies, In Mourning, and now 7 Horns 7 Eyes.  These bands, for me, have breathed new life into a style that I originally loved but held on to mostly due to nostalgia.

Elysian are ANOTHER entrant into this new guard of melodic death metal.  About ten days ago we premiered a stream of their debut album Wires Of Creation, but I was so enamored with this album that I felt compelled to review it.  These guys deserve as much press as they can get. 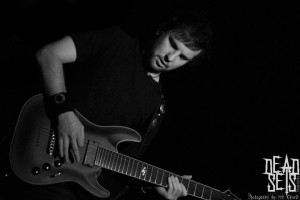 Elysian’s sound, at its very core, won’t be foreign to anyone who has kept up with the musical movement I’ve been describing.  Shades of In Mourning, Insomnium, and Daylight Dies — all three are here in full force.  Elysian DO have their own unique sound, though, so don’t be misled.

There are bouts of more traditional death metal riffing here and there, and the music is peppered with some rather post-thrashy Nevermore–like moments. There is also a bit of Katatonia influence in the way Elysian layer their melodies.  In addition, the music is more low-tuned than that of Elysian’s influences, while 7-string guitars help provide more sonic diversity.

The music is also quite aggressive despite the ever-present melancholy mood, and the riffing is technical — in an immensely enjoyable way.  The vocals have a sort of throaty rasping tone, similar to that of Ezra Haynes of Michigan melodeathers Allegaeon, providing a fitting vocal assault for the music.

The songs are full of power, pomp, and circumstance.  Check out the mighty stomping verse of “Mans Design” or the awesome lead guitar melodies in “The Climb From Fear”.  “Sigma” is an intense number, full of galloping riffage, soaring melodies, and insane harmonies, while songs like “Sense Offender” and “The Gate” have more intricately involved riffing, though they’re no less intense. 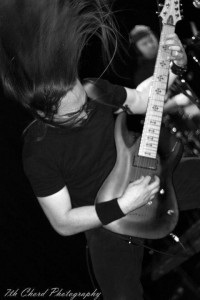 Elysian’s skill in expanding and contracting the amount of air surrounding the music and making the variation work to superb effect is astounding.  It’s not often a band can create that feel of being “open” and “closed” with equal quality.  Then there are songs like “Machine”, which break the mid-paced mold and go straight for a frantic thrash pacing.

The mix of Wires Of Creation is very open, yet it has a ton of meat to it.  The guitars are thick and powerful, while the drums are organic, pulsing, and thundering.  The entire mix was handled wonderfully well.

If you haven’t checked out the album stream we have up on this site, I highly suggest you do — and then grab this album and enjoy yourself some epic face-melting.

EDITOR’S NOTE: Wires Of Creation is now available for digital downloads from Bandcamp via this link: http://elysian.bandcamp.com/

For hard copy and other merch go here: http://elysian.bigcartel.com/

One Response to “ELYSIAN: “WIRES OF CREATION””